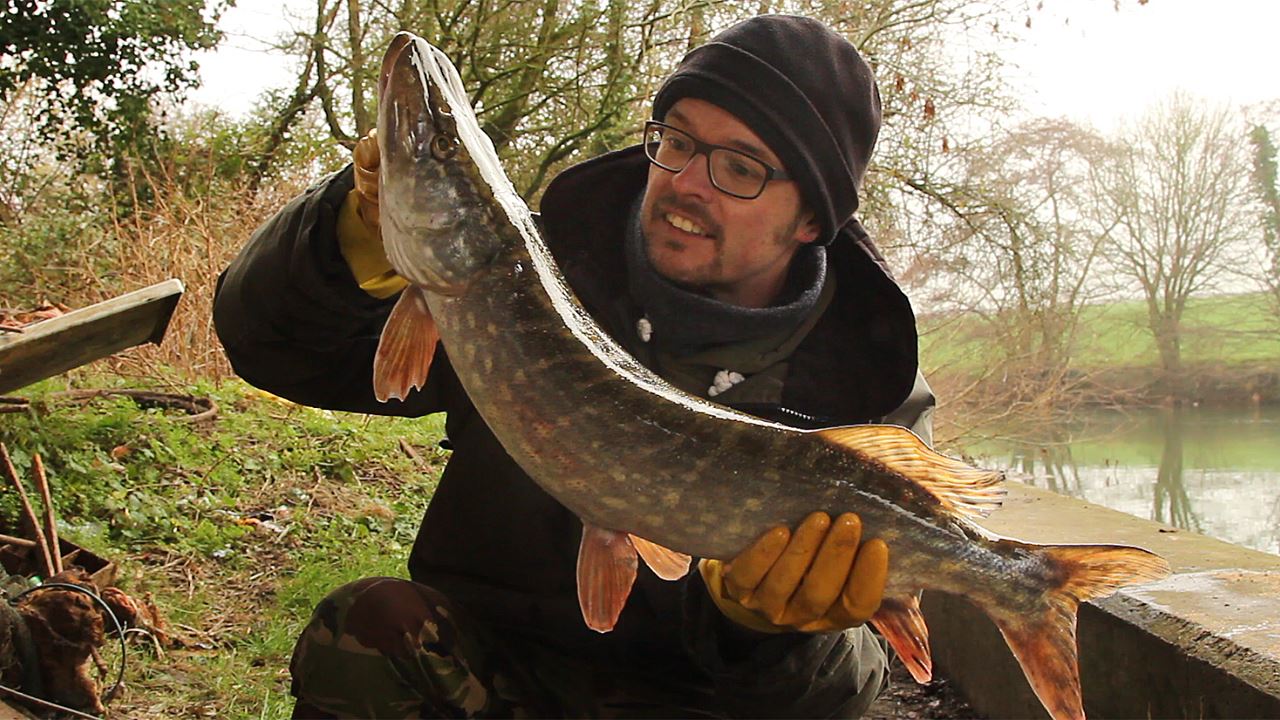 For the second session of Jim's Lure Challenge and we decided to head to a different stretch of the Bristol River Avon, called 'The Shallows' at Saltford.

Although I've fished at Saltford before, it wasn't for pike and I'd stuck to the long section running down to the lock and the Jolly Sailor pub so I was eager to try the shallows. Jim very kindly let me have the 'prime' swim at the end of the car park which has a stream running into it which looked great for some perch and some good margins next to moored barges. I'd decided to dead bait and lure on this session as it was a new location and I wasn't sure what method would win out...

After twenty minutes or so with nothing to show for my efforts I checked my phone, only to find out that Jim had managed to bag a pike a couple of swims to my left on his second cast! He was convinced there was something bigger swimming out there as the jack pike had a nick out of it's flank and although he very kindly allowed me to have a quick cast around, I couldn't hook into anything other than the bottom of the river!

From where we were standing, we could see downstream to the disused railway bridge and decided to up sticks and take a look. To be honest, it was pretty foul under that bridge: the amount of rubbish was shocking, beer cans, discarded tackle, lure packets, dead bait packets, plastic bags... A pretty sorry state. Luckily I'd taken a 50 litre bin bag which we filled with rubbish however we could've filled it two or three times more. The lack of respect people have for the environment just does my head in!

There was also a massive mound of rusting bit of metal consisting of bikes, railings, fences, bars... it looked like someone had been dredging the river and had pulled out every bit of snaggy rubbish they could find! Very kind of them, but it's a shame that it was just left there in a heap to rust away. However what it did mean was that the water was pretty much free of snags which made the fishing a lot easier.

Again Jim very kindly let me fish the prime spot on the left of the swim and I decided to drop a ledgered smelt tightish to the margin and then set about casting the lure in an arc starting left to right...

...which is when I got my first taste of lure action as a pike struck just as I was pulling the lure into the margin! Unfortunately for me, a quick shake of the head and the pike was off - I guess that's the difference between a single hook in a soft plastic and a two sets of treble hooks?!

Over the next 20 minutes both Jim and I had a couple of follows and then suddenly the dead bait rod sounded. Again, luck wasn't on my side as it turned out the rod was snagged on something. The fish was definitely on as if the braid ran when I lowered the rod tip but after applying gentle pressure I managed to get the rig back but minus the bait and fish. Damn.

But there were fish in the swim! So the dead bait rod went back out to a new spot slightly further out from the margin to the left and we got back to casting the lures.

And then finally a bit of luck! The alarm on the dead bait rod sounded again and this time a solid strike resulted in a hook up - pike on at last (albeit with the wrong method but hey, at this stage a fish is a fish right?!). No monster but a welcome pike all the same.

The predicted drizzle really started coming down now and although we did head upstream along Mead Lane towards the lock and weir at the Jolly Sailor pub we didn't have any more action.

So another interesting day on the bank. It was great to have a hook up on the lure, it was a shame it came off but it was really good that we both had a fish - even if mine was on the wrong method!