My Easter fishing trip this year was so bad that I've really been a bit down on fishing of late... So what better way to raise my spirits than a 24 hour spring session at Follyfoot Fishery?!

It doesn't really feel like spring has sprung yet and although we had a freak sunny day on the Saturday I awoke to a steady drizzle on the Sunday of my session. Damn. With Follyfoot being such a zig and floater venue I was really hoping for some bright conditions! But hey, you gotta go when you can and conditions aside, I was really excited about the prospect of 24 hours fishing.

The change over time at Follyfoot is 12pm so I try and arrive at 1pm on Sundays to give the swim a bit of a rest. But today really heavy rain and bad driving conditions meant I didn't pull into the car park until gone 2pm. I'd originally booked into hut 19 in the far back corner of the lake but after meeting with the fishery owner it appeared that they'd double booked the hut! Double damn. Hut 10 was free though (which is my 2nd favourite on the lake) and after finding out from another couple of anglers that the father and son duo who'd fished in for the previous 24 hours had caught over 50 fish between them I decided to jump in there.

Despite the bleak conditions I decided to fish one rod on the bottom and two on zigs, the first being a couple of foot under the surface and the second at about 1/2 depth at around 6ft. I had plenty of different bits of zig foam soaking in pineapple liquid so I could try lots of different depths and colour combinations until I found one the carp liked.

The bottom bait rod went out to the left in open water below the power lines and the zigs at 6 wraps directly in front of the platform. Luckily for me, the zigs were cast at showing fish as three crashed in front of me while I was lining up the cast!

I didn't have to wait long for my first bite... I'd retreated to the hut to shelter from a shower of rain and was crouched on the floor tying up another zig when I noticed the tip on the right hand rod knock. Sometimes zig bites can be pretty finicky so I decided to pick up the rod and reel down... into a fish!

It quickly became apparent this was a decent carp as it absolutely steamed off, the fish clearly hadn't realised it'd been hooked. As I was only using 8lb zig line and a tiny size 10 hook I played the fish lightly and although it managed to tangle my other two rods I finally managed to slip what looked like a 20lb common into the net.

As it turned out, I was pretty lucky to get it in - the hook was virtually straightened out! 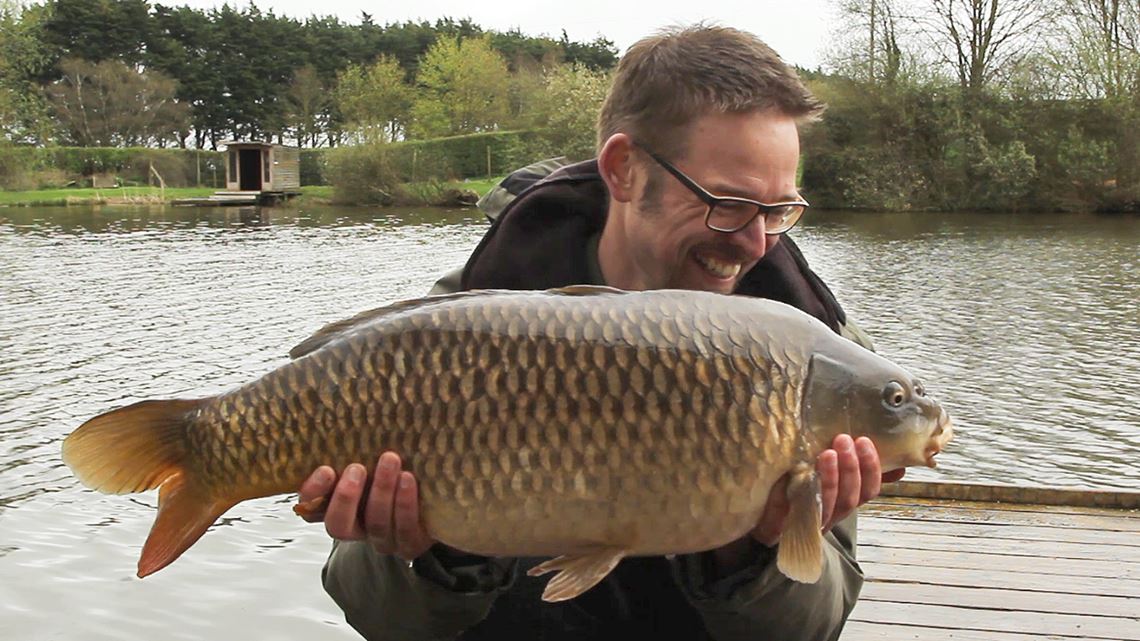 Amazing! What a start to the session! I didn't weigh the fish but it felt like a solid 20lb which is a good size for the venue. There was a big ol smile on my face as I slipped the fish back and I eagerly set about sorting out my tangled rods to get them back out asap.

Which is when the owner arrived at the hut and explained that it was actually hut 10 that was booked out and the angler was arriving at 8am the following morning! Triple damn. How's your luck eh?! They'd phoned the chap booked into 19 and he'd agreed to not arrive till 2pm on the Monday so that left me with a choice: stay in hut 10 and then upsticks early the following morning or move to hut 19 and leave an hour or so early....

Bugger. With such a good start to the session I wasn't overkeen to move but similarly I didn't want to move first thing in the morning and watch another angler bag up in my prebaited spots from the other side of the lake!

So I moved. Hut 19 has been really good to me in the past and as time was steadily marching on I really wanted to get myself settled and sorted on some spots before it got too late in the day. The good news was that the fish were out in front of me in numbers and judging by the reaction to a couple of spombs of sloppy spod mix, they appeared to be hungry!

I've done a lot of research about spod mixes for zigging and although you can buy off-the-shelf mixes from the big bait companies, they aint cheap... So after much experimenting, I've come up with a mix that creates a nice cloud and has a good selection of floating, buoyant, semi buoyant and slow sinking food items, all of which keep the fish feeding at different levels throughout the day. 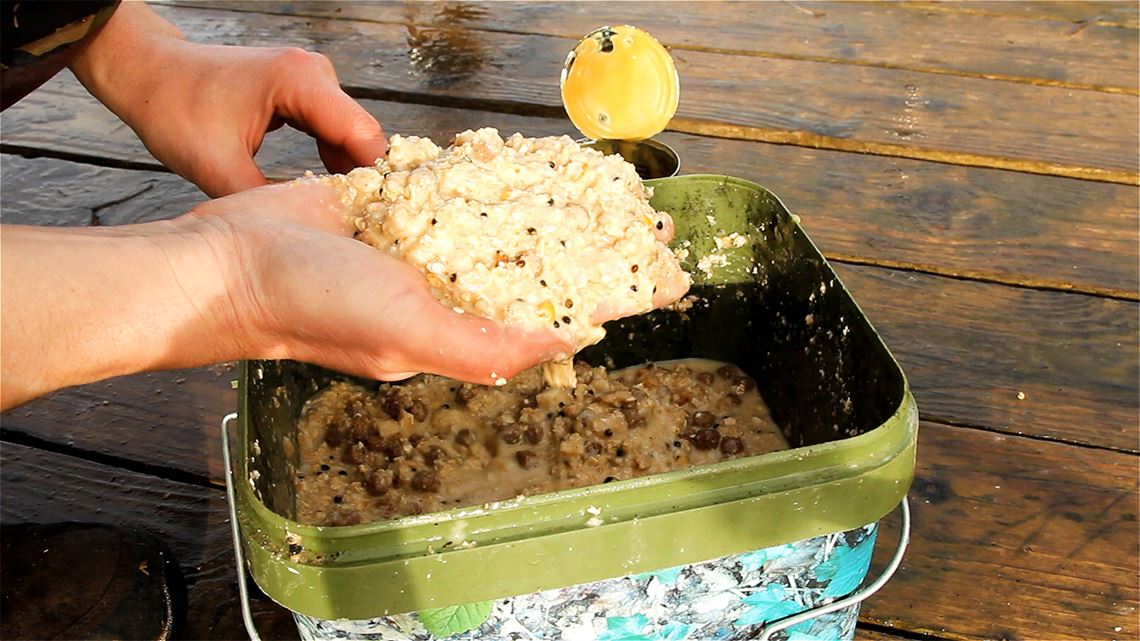 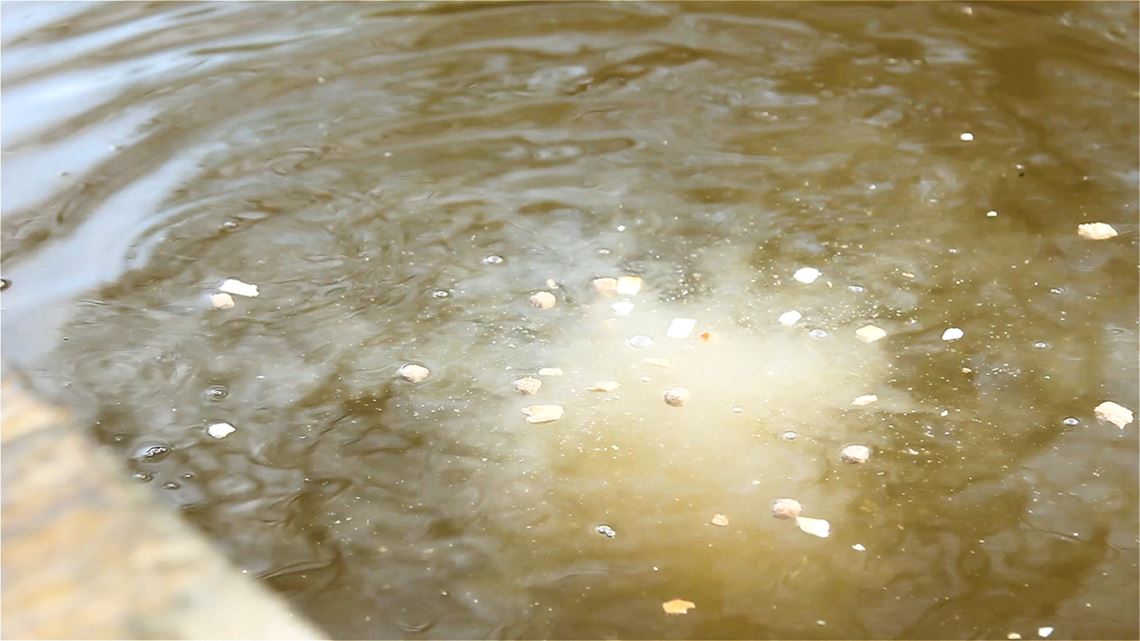 It's a pretty gloopy, sticky concoction but it appears to work everywhere I've taken it! And it's cheap too as nearly all the ingredients are in the saver ranges from either Tesco or Sainsburys, which is a good thing as the key to zigging and spodding is to keep the bait going in regularly - which means you get through a lot of it in an average day session.

After getting really pissed off with the zig float, I decided to plumb the depth and tied up some zigs at 8ft and 6ft for the right and middle rod while the left hand rod went out with a solid PVA bag of pellets. Due to the surface activity, I wasn't expecting much to happen on the deck until the evening so there was no harm having a sleeper rod baiting up a spot for later.

And it worked! The zigs really came into their own over the next 5 or so hours with multiple fish on both rods. 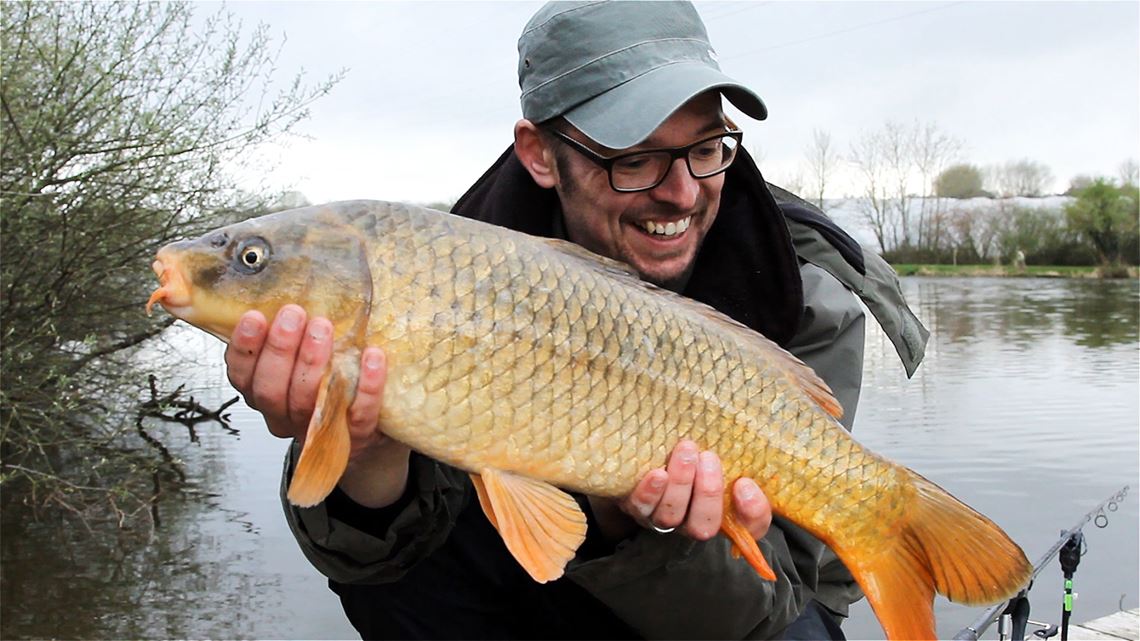 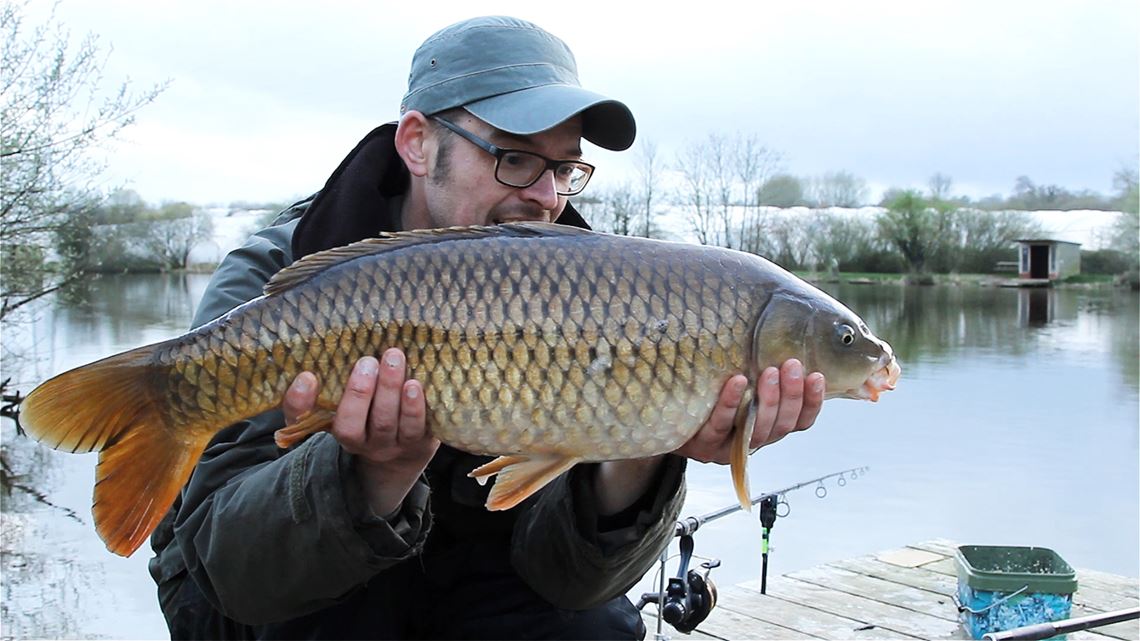 Although the first fish in the previous swim fell to a black and yellow zig, it wasn't until I switched to red in this swim that things really took off. The zigs kept producing well into darkness and it was excellent fun! I found that if the bites dried up, changing the depth of the zig by a foot in either direction and getting some more spod mix out would kick start the action again. 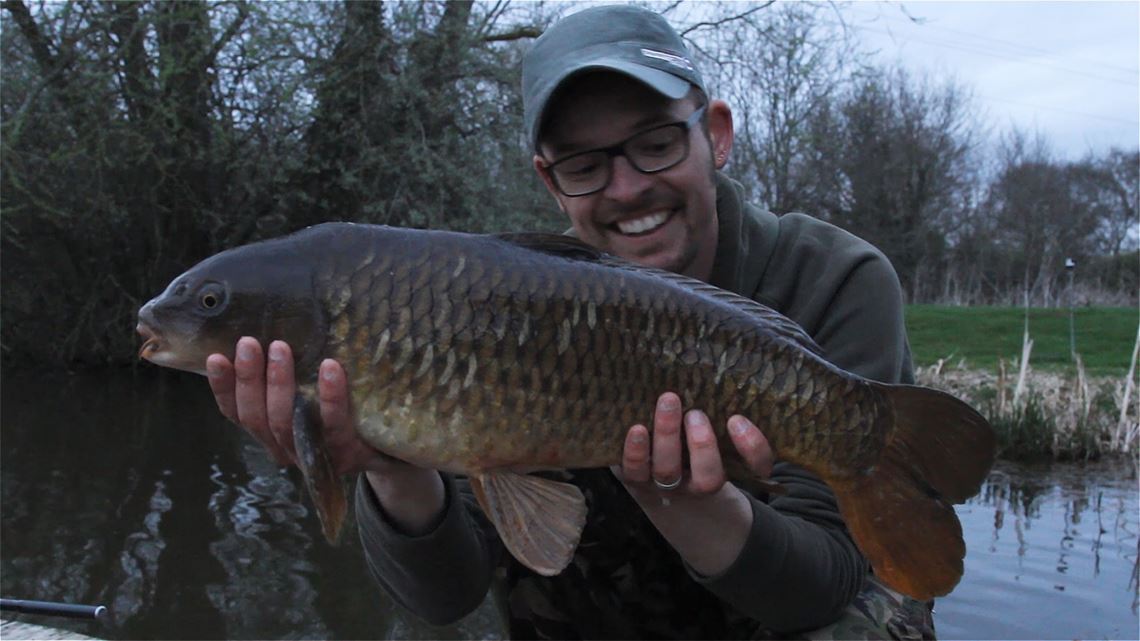 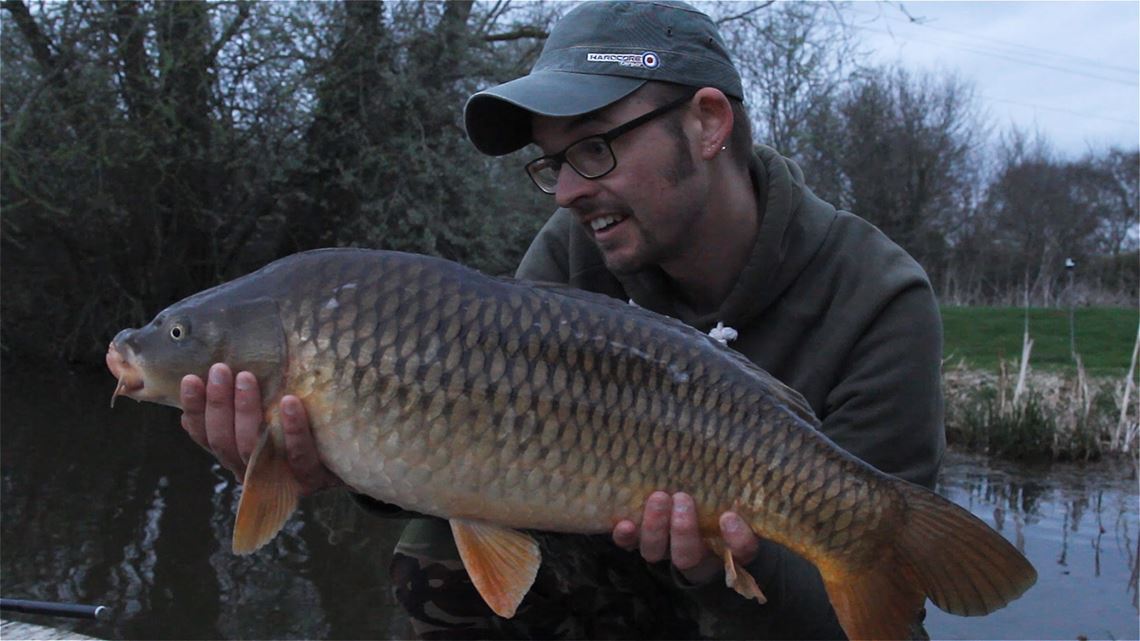 The bites finally dried up when it got properly dark at which point I switched all three rods to bottom baits, namely pink Scent From Hell wafter dumbells, a hookbait I've done incredibly well with in the past at Follyfoot. The left hand rod that had been cast regularly throughout the afternoon soon started producing bites and I had a good couple of fish before finally deciding to reel in and get my head down at 2am. 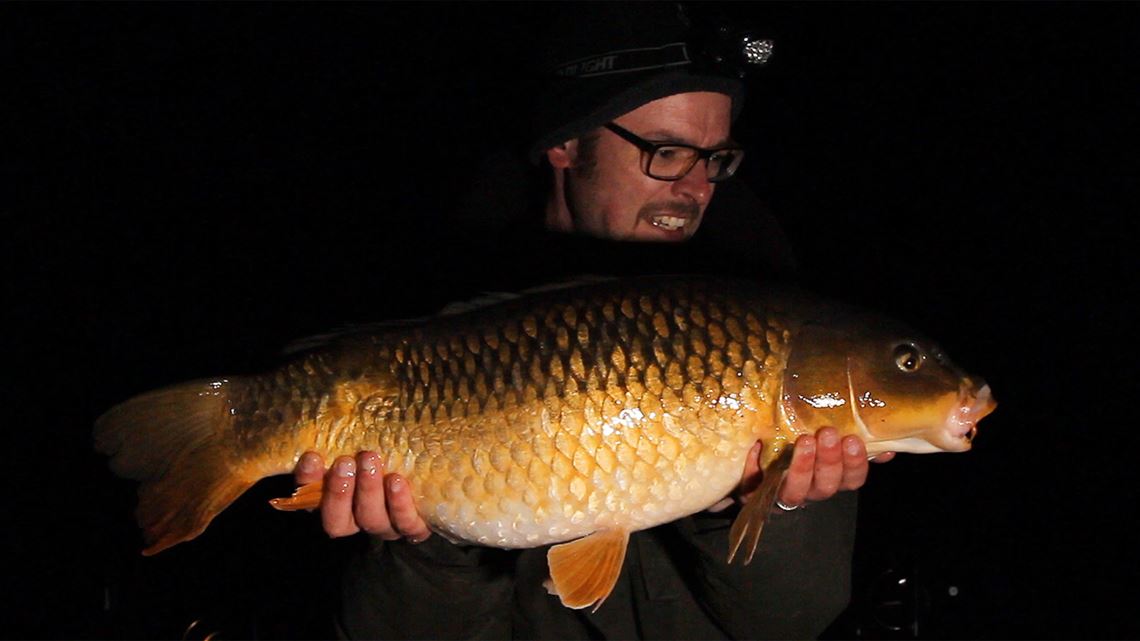 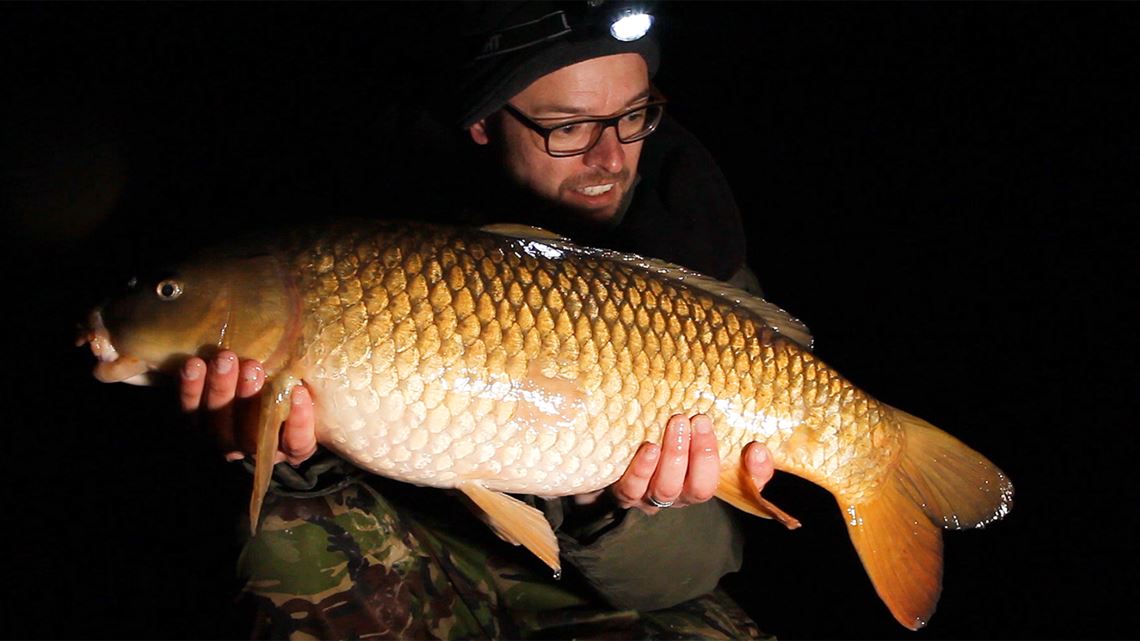 The weather conditions changed again in the morning to bright sunshine and strong winds which unfortunately completely killed the fishing. I had one fish off the bottom but apart from that, the bites dried up and try as I might, I just couldn't get them going on the surface. The last fish came out of the blue on the deck and was a bit of a surprise after such a quiet morning. 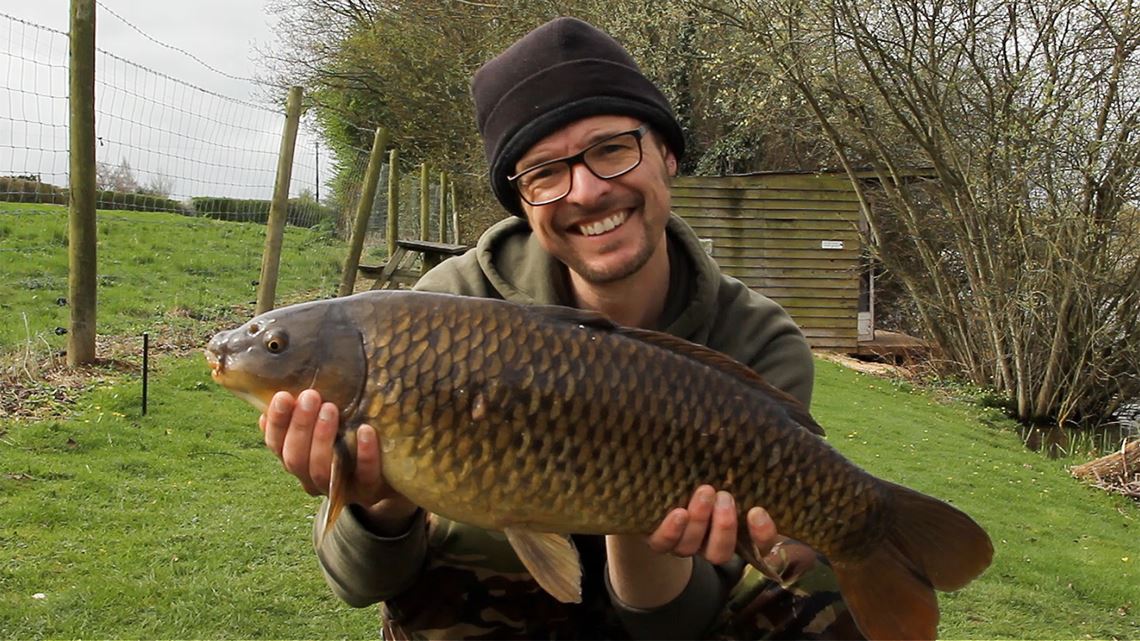 Annoyingly, the anglers who'd booked themself into hut 10 never materialised meaning I could've stayed put! Would it've been a better session? Who knows... After that initial fish and the fact that the previous occupants had over 50 fish in the course of the weekend, I guess it could've gone either way? As it turned out I spent the last couple of hours of the session back in hut 10 and although I did have one pick up, the fish just weren't in the mood at all. And not surprising as the cold wind whipping down the lake was sending white tipped waves into the far corner.

But hut 19 had been kind to me yet again: I'd loved every minute of the zig fishing (once I'd stopped using the zig float that is!) and with a decent haul of sizeable fish to show for my efforts, I was a happy angler. The only thing missing was one of the ornamental koi's that live in the lake - but it's always good to have a reason to return for another go ;)