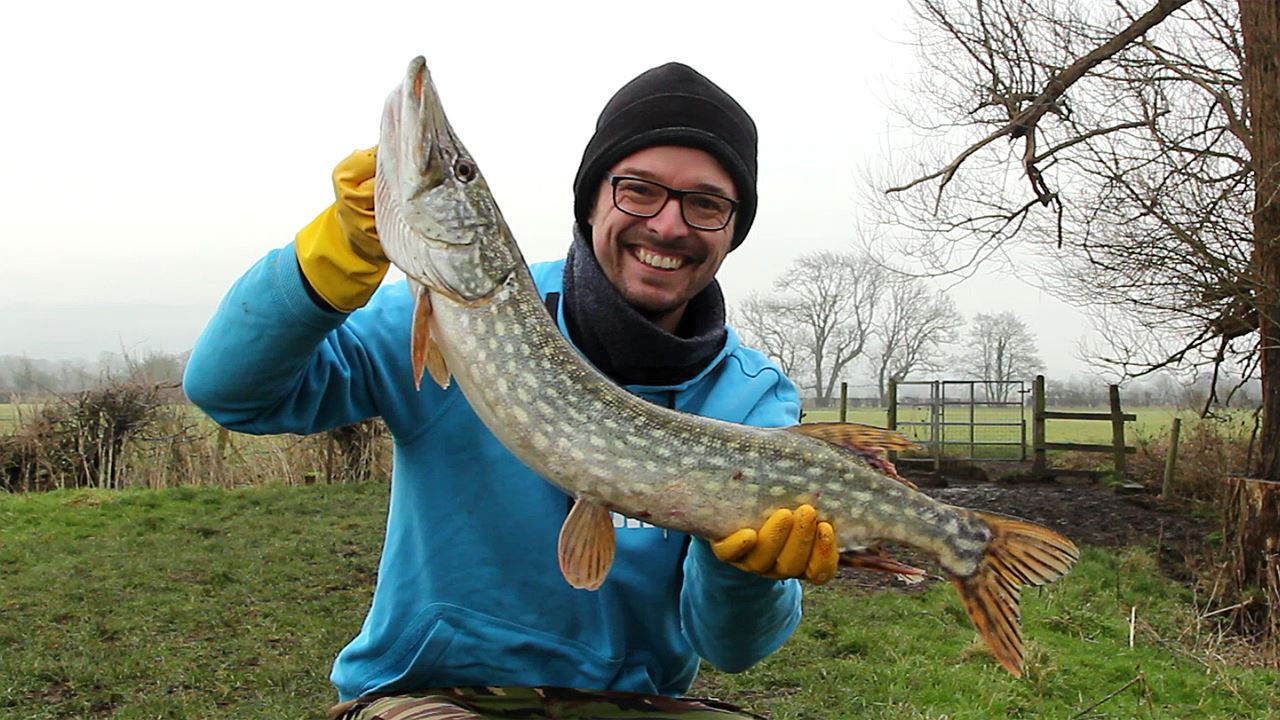 Good golly it's been a grim end and start to the year... Snow, rain, a continuously flooded or muddy river and illness has all meant I've not been out fishing since mid December... But today the conditions actually looked pretty good so I headed out to the River Avon at Keynsham to see if the pike were in a hungry mood.

Although we've had a break in the weather for a couple of days one thing became quickly apparent as I made my way along the river bank: it was gonna be very, very muddy! The 1st swim I tried was sticky mess of slit and mud and it was obvious the banks had been underwater for quite some time over the last weeks. But the water level was back to normal and the clarity and flow wasn't too bad so you never know, maybe the fish would be on the feed?

The 1st swim I tried produced a savage knock and then two snagged rods. I've a feeling that a lot of debris has been washed downstream (I witnessed whole tree trunks floating by during the session!) and it didn't seem to matter where I cast, the trebles would lodge on something. Luckily I got all the tackle back on both occasions but after having spent a frustrating 30 minutes sliding around in the mud it was time to up sticks and head to the next swim.

The 'tree swim' on the 1st bend is always worth a cast and I decided to fish both sides today, starting on the right. The left hand rod went out towards the tree and the right went along the margin where I've had fish from in the past. To get the fish in the feeding mood, I mixed a loaf of liquidized brown bread with a tin of mackerel fillets in oil along with a good splash of thai fish sauce and put 3 or so good size balls over each rod. It's a stinky groundbait which has worked wonders in the past.

After 10 minutes I was just beginning to toy with the idea of prebaiting the left hand side of the tree when the alarm on the left rod sounded! The rod tip was bouncing around and I struck into a solid resistance - fish on! Unfortunately, after a frantic minute the fish managed to throw the hooks and a mangled whole sardine came in with some pretty healthy tooth marks along it's flank...

My mantra when I loose a pike is to get the bait back in the water as quick as possible as the fish quite often doesn't go far and will sometimes have another go. This time was no exception: the bait went back out and as I was setting the bobbin, the braid jumped in my hands! This time I gave the fish a little while longer, feeling the line to make sure it was still on and when I struck, the pike bolted off to my right - fish on for the 2nd time!

But still no joy... This time I managed to get him/her nearly to the landing net before a violet shake of head saw the hooks thrown... Damnit, very frustrating but exciting at the same time!

The rod went out a 3rd time to the same spot and although I received a couple of violent rod taps and the bobbin climbed to the blank, it all went quiet.

Whilst this was going on another angler arrived in my swim and we began to chat - and the chat went on for quite a while, in fact nearly an hour! All the while the rod was still out with it's now fairly mangled sardine and as we were just wrapping up our conversation, the alarm sounded and it looked like I was in with another chance.

This time I gave the fish a bit more time and after a solid strike and a good run around the swim a jack pike slipped into the net - by no means a monster but it meant the first session of 2018 wasn't to be a blank! Happy days.

The rest of the session past without so much as a knock. Having seen four more pike anglers heading upstream I decided that heading back towards the marina was the best bet and although I tried every likely looking spot, there were no more takers.

But a good session! I learnt about a fair few new venues to try from the chap I got chatting to and it was a pleasure to be out on the bank. Although I promised myself it'd be pike all the way until spring I'm beginning to fancy a carp session and having just joined a new club called Crosshands Angling I'm toying with trying a new water next week in an attempt to bag some mud pigs! As it happens, they have a venue about 5 minutes from school which would mean a much longer session... Handy that!