Loads of jacks and one BIG pike on the Bristol Avon

Man flu and Hurricane Ophelia are two things that will NOT stop this man from getting his weekly river pike fishing fix!

To be honest, I didn't think todays session was gonna happen... There just seemed to many things against it but sometimes you've just gotta push a bit harder and as I stomped through the leaves upstream on the River Avon at Keynsham, that 'buzz' of being on the bank came back to me.

The day was looking very spooky: I'd been keeping an eye on the weather forecast and record temperatures and high winds were being predicted across most of England. It was warm, muggy even, but the light was the weirdest thing. The sun was a bright orange disk low in a dull grey sky, it almost looked like the reverse of an eclipse? Although the wind was blowing strong, it was very still and quiet with no bird song and only the slow current of the river providing any background noise... Very, very odd.

Rather than stomping a long way across the fields and working my way back, I'd decided to reverse the idea and fish the swims up from the marina and into the 1st field. My chest infection was making breathing difficult and I didn't like the idea of a long walk (lazy I know). So I jumped in the 1st available swim which is perfect for setting up in as it's wide and open.

It quickly became apparent that drifting sprats was going to be tricky... The wind was blowing against the current so big bows were forming in the lines and bite detection was virtually impossible. So I decided to up sticks and move to the next swim which was slightly more sheltered...

...only to find a bloody boat in it! It's pretty cheeky as a new pontoon was installed on the stretch just up from the marina meaning five or so swims are now unfishable. I'm guessing you have to pay for mooring up at the pontoon but it's free if you can get away with it in one of the fishing swims?! Grrr.

So I decided to head into the 1st field and fish on the bend opposite the boat yard that 'The Crane Stretch' gets it's name from. I'd never really fished the swim before but it looks good and I was keen to try somewhere new.

Due to the wind, I switched one rod to a ledger set up and the 2nd with a 1oz ball weight above the swivel, the idea being one would be nailed to the bottom and the other would still 'drift' if the current was strong enough. I did stick with the sprat rig though as my feeling was that there would be loads of hungry jacks around so smaller baits was the best bet. And the last change was to cast out further into the flow. I've been rewatching a lot of Joe from Nuffinbutfishin's YouTube channel and one thing I'd noticed was he generally casts out into the river, not something I've really done as I'd opted to fish close in snaggy swims in the past (the flow on this part of the Avon always seems to be very fast which has put me off casting to the middle in the past).

So out went the baits and I sat back to see what would happen... As it turned out I didn't have to wait long! The right hand rod went off with a screaming take that I really wasn't expecting! 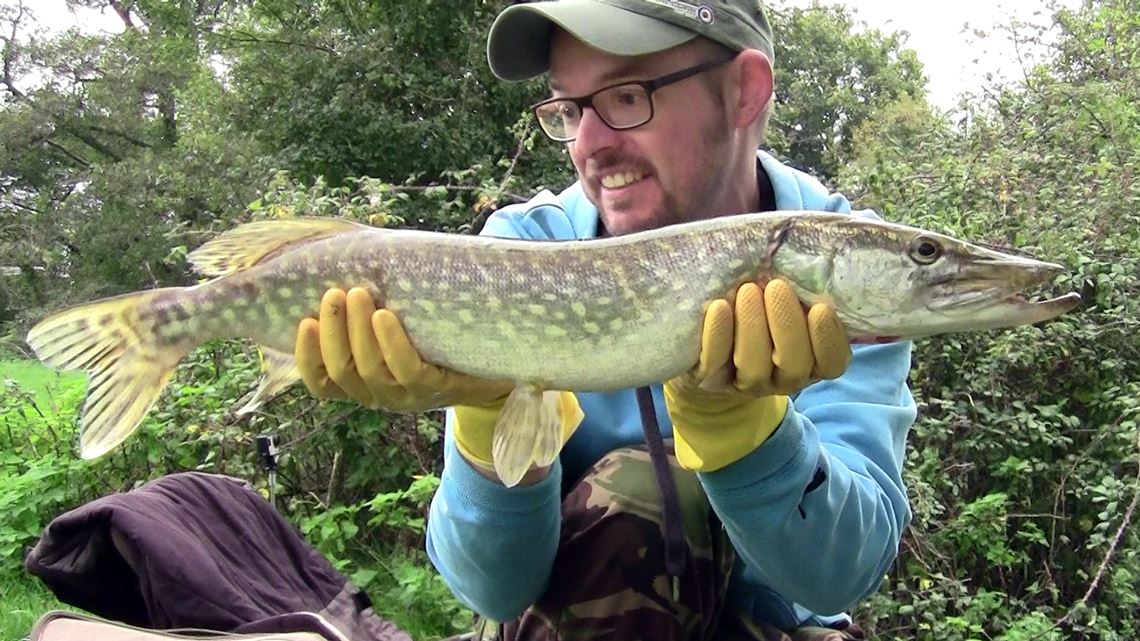 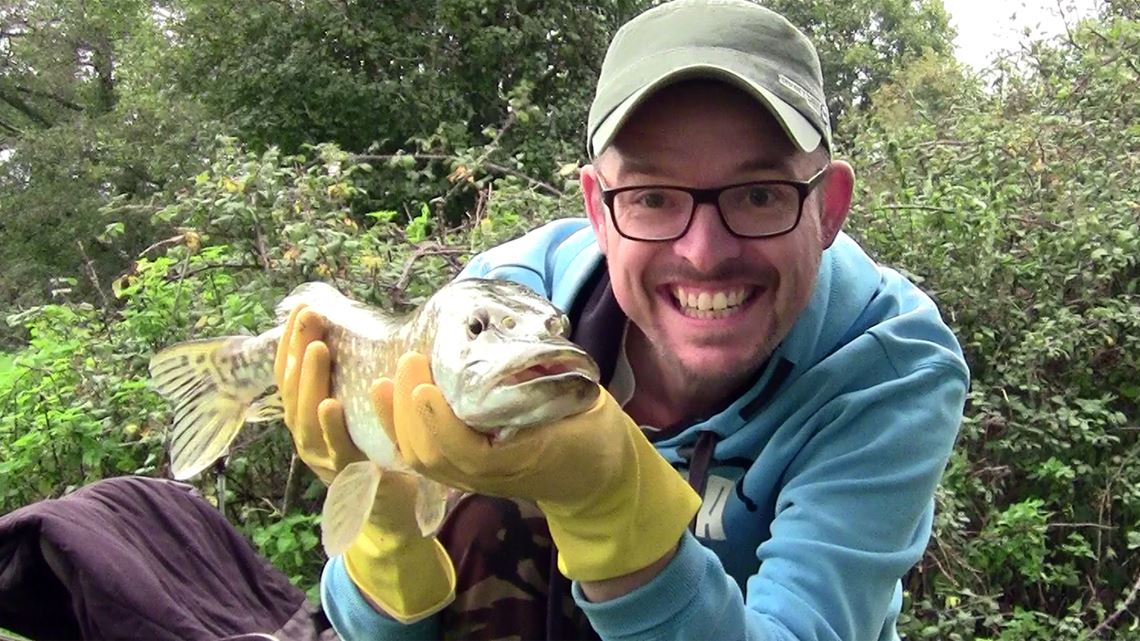 Only a small jack but it meant I was off the mark and it seemed to spark a feeding frenzy as over the next hour or so I banked another 3 jacks. Switching between sardines and sprats seemed to do the trick and although the weather was still a challenge, jack after jack was attacking the baits (I missed a couple of runs, striking early to avoid deep hooking the small pike). 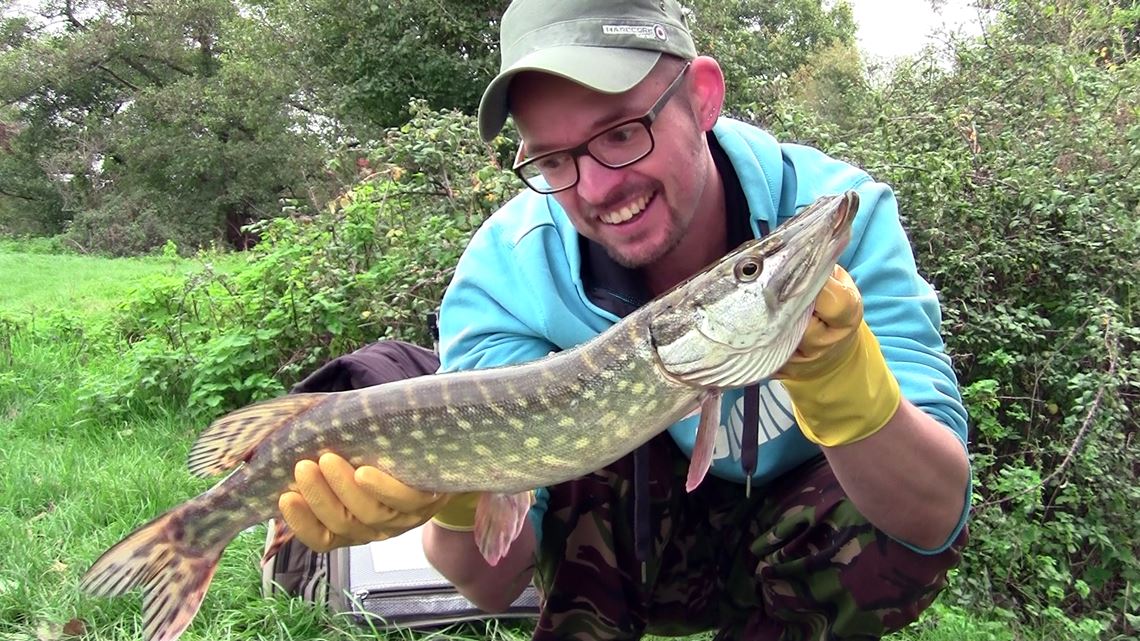 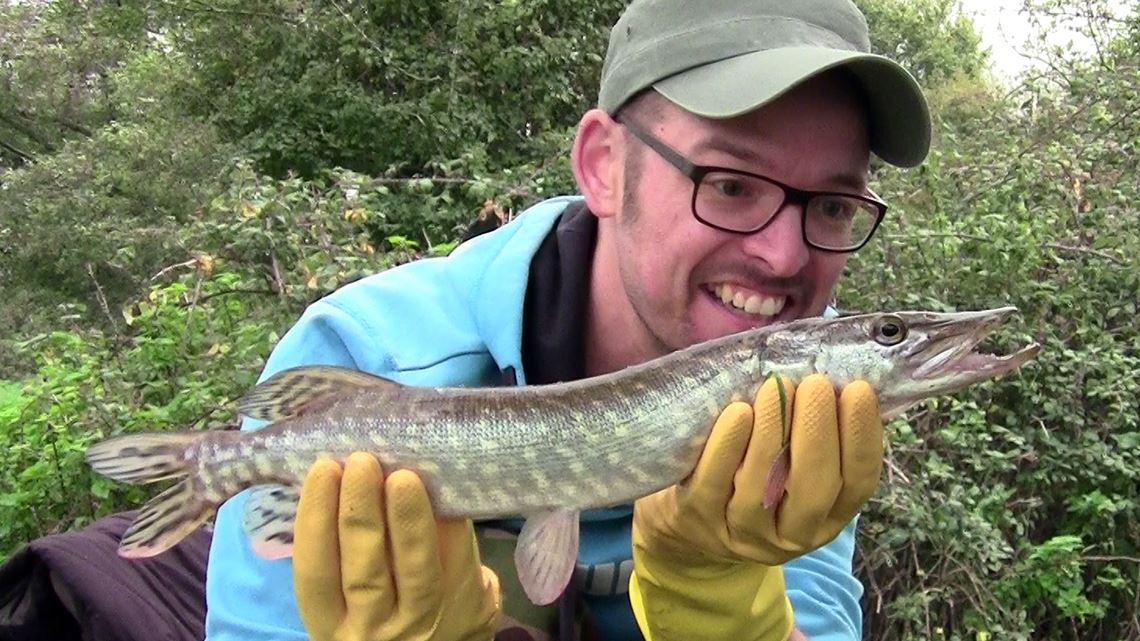 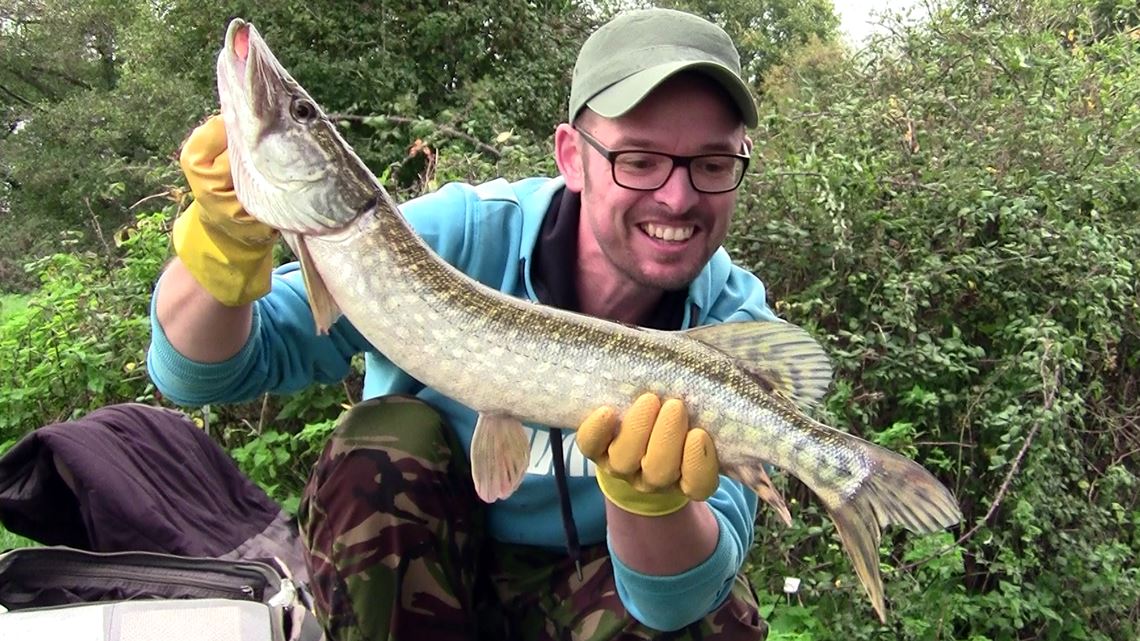 After all that activity the bites tailed off and as I began thinking about a move, the sun came out and the wind eased off! Very odd. I really thought the sudden change in weather would kill the fishing and as it was now creeping towards hometime I figured jumping into the swim to my right was worth a go. It's just past the bend in the river and gives you access to the far tree lined bank as well as a long straight just off the crease heading down river - ideal.

The only problem was I'd nearly run out of bait! The jacks in the last swim had left me with a very sorry looking sardine tail, three sprats and one mackerel tail... What the hell though, gotta give it a go! The bedraggled sardine tail went out on the ledger rod to the far margin just round the bend and the right hand rod was baited with a sprat and cast into the flow.

I was very surprised when ten minutes after casting out the left hand rod exploded into life! If this was a jack, it was really giving it some... But I was greeted with a solid resistance when I struck into the fish and after a fantastic fight a stunning looking River Avon pike was sat in the net. 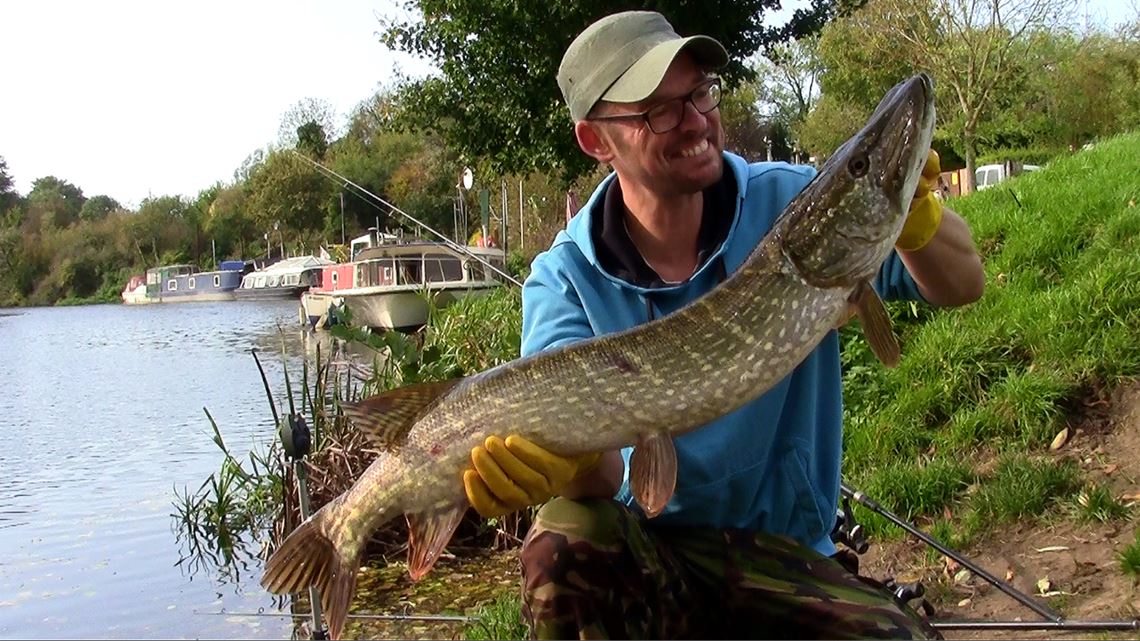 What a great fish! As we're early in the season, it was a lean mean fighting machine of just under 10lb but give it another couple of months and I reckon it will hit 15lb no problem.

By now the day was really marching on and as the cows turned up (I think they head this way for an afternoon feed from the farmer?) I headed back to the swim with the boat in it which had now disappeared. Although there were no touches, I'm convinced it's worth giving the swim another go in the future as it just screams pike!

So yet another brilliant days fishing on the Avon! I can't wait for the next session, we're really heading into winter now and those pike'll be hungry...