An Amazing Session on Little Hayes at Todber Manor!

I've heard a lot about Todber Manor and it's long been on the list of spots to try. There are lots of lakes to go at but I decided to fish Little Hayes for 24 hours as the opener for this years spring fishing trip - and it did not disappoint!

An early start saw me on the road by 7am, my thinking being I could beat most of the traffic coming in/out of Bristol and be at the fishery by 8.30am. Luckily for me, the roads were pretty easy probably due to it being the 1st week of the Easter break (where do all the cars go?!) and I arrived on time and raring to go.

Once I'd got my ticket I headed down to the lake for a look around and to see what swims were free. True to form, all the 'easy' swims (i.e. the ones you can pretty much fish from your car!) were gone which is fine by me - the fish know which areas to avoid! After a bit of a wander round, I settled in a swim directly opposite an island point on the nearside bank which was empty of anglers apart from a single swim right down the other end of the lake. With no fish showing themselves, I figured the island and reed lined margins was as good a starting point as any. 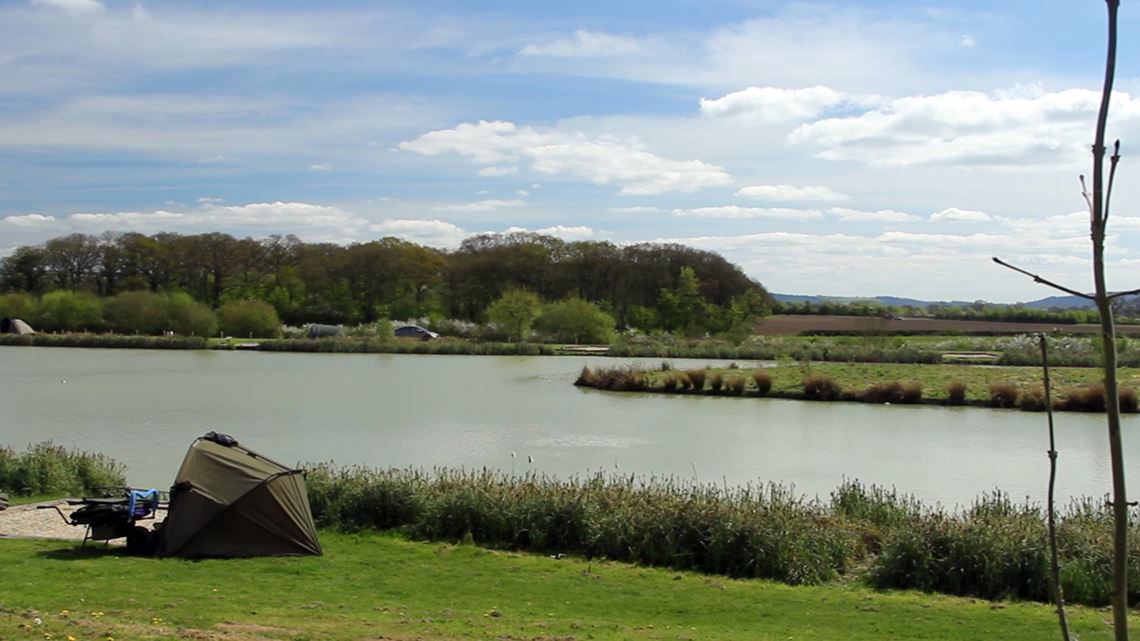 With the far bank being busy and it being the Monday after a sunny weekend, I wasn't in too much of a rush to get rods in the water. I had a feeling the lake would've had a hammering over the last 48 hours and I was more than happy to slowly set up and get the rods out at a leisurely pace, the main focus being to watch the water for signs of fish to either cast or move onto. After a chilly start it was rapidly warming up and my thinking was that if the fish weren't up on the surface, they probably wouldn't be feeding on the bottom till later in the day when it cooled down. 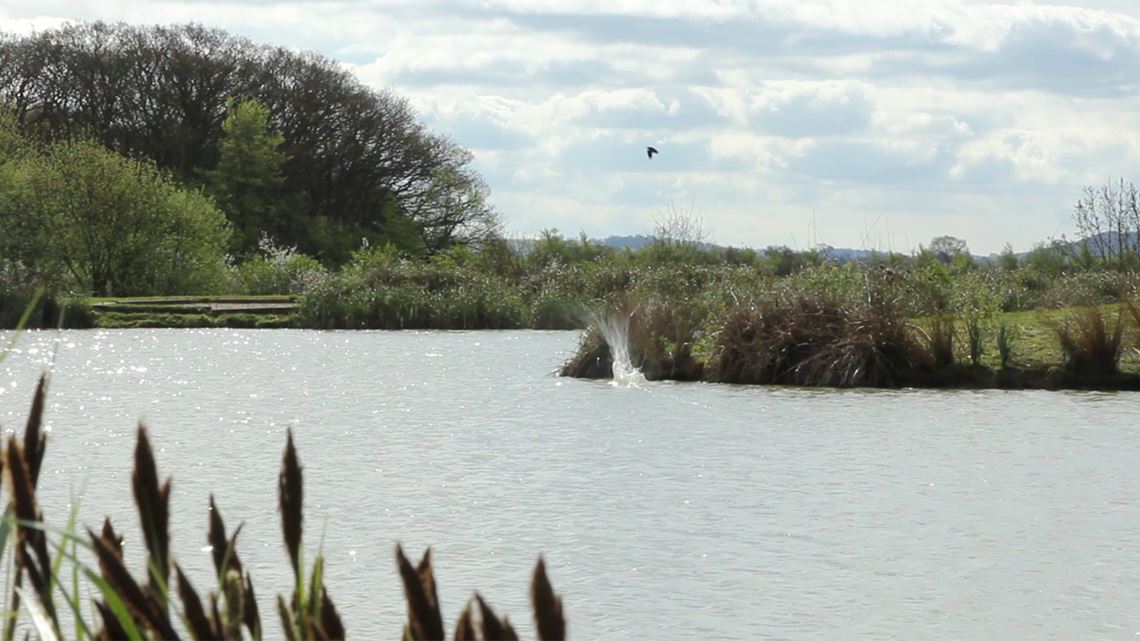 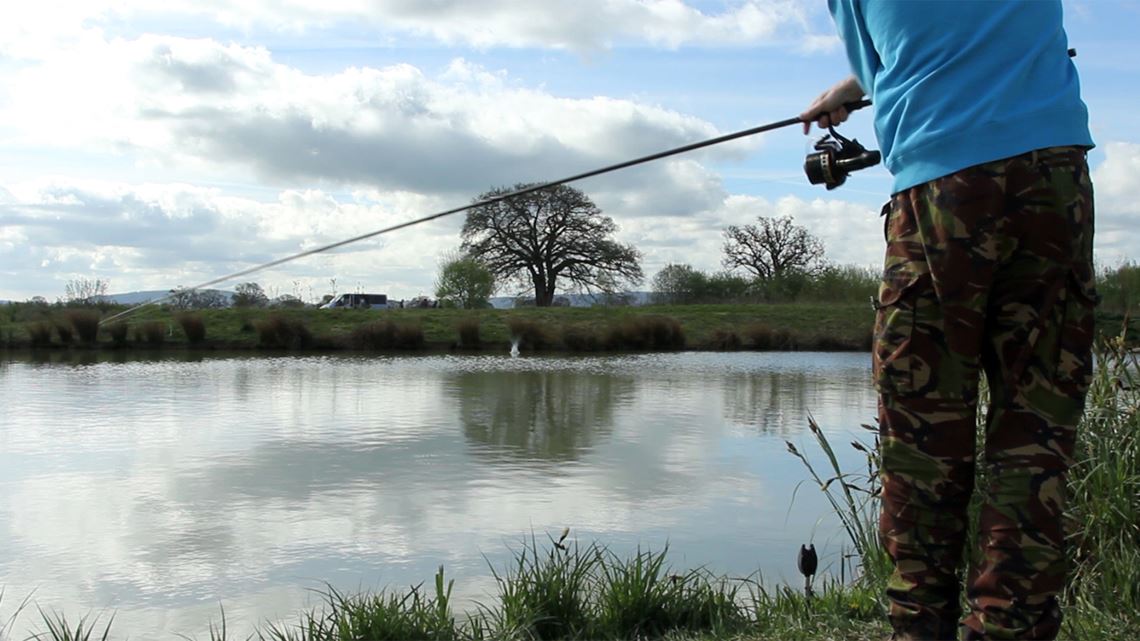 I decided to put solid bags to the island point and a likely looking spot on the island margin. With the third rod in the nearside margins, I set about sorting the rest of the gear out. Over the next 6 or so hours not a lot happened rod wise but I did start to see fish! They were crashing to my right in a bay past the next swim and out towards the island point. As I had the time, the marker rod came out and I mapped out the swim, making notes of the spots I'd seen fish and getting the wraps counted for where I wanted to potentially fish overnight.

At around 4ish, the rod out towards the island point ripped off - 1st fish on! 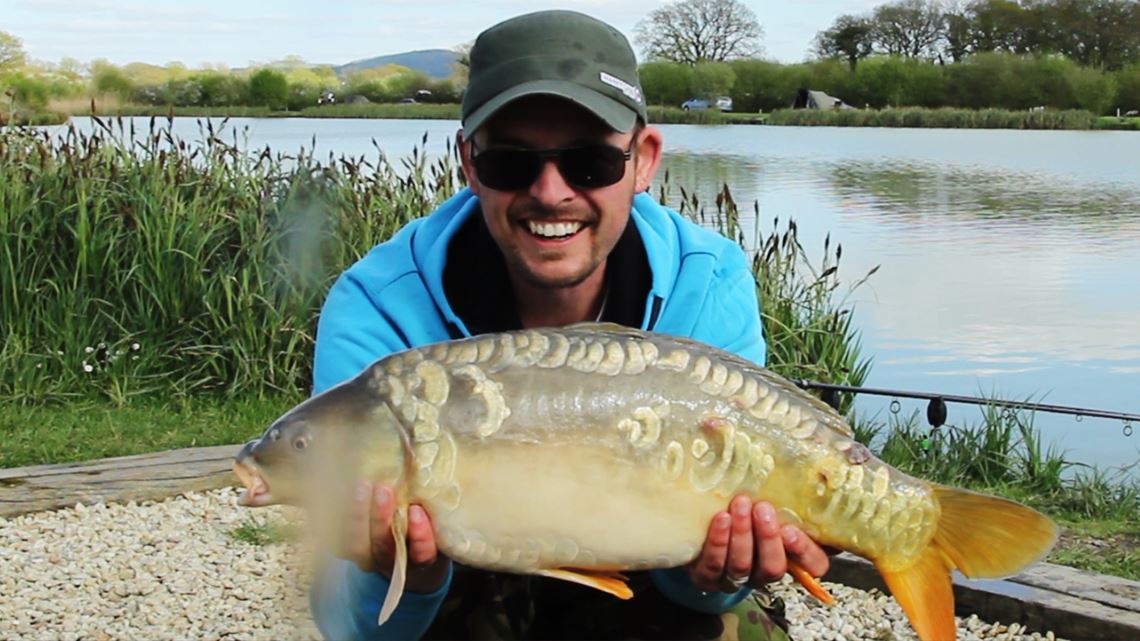 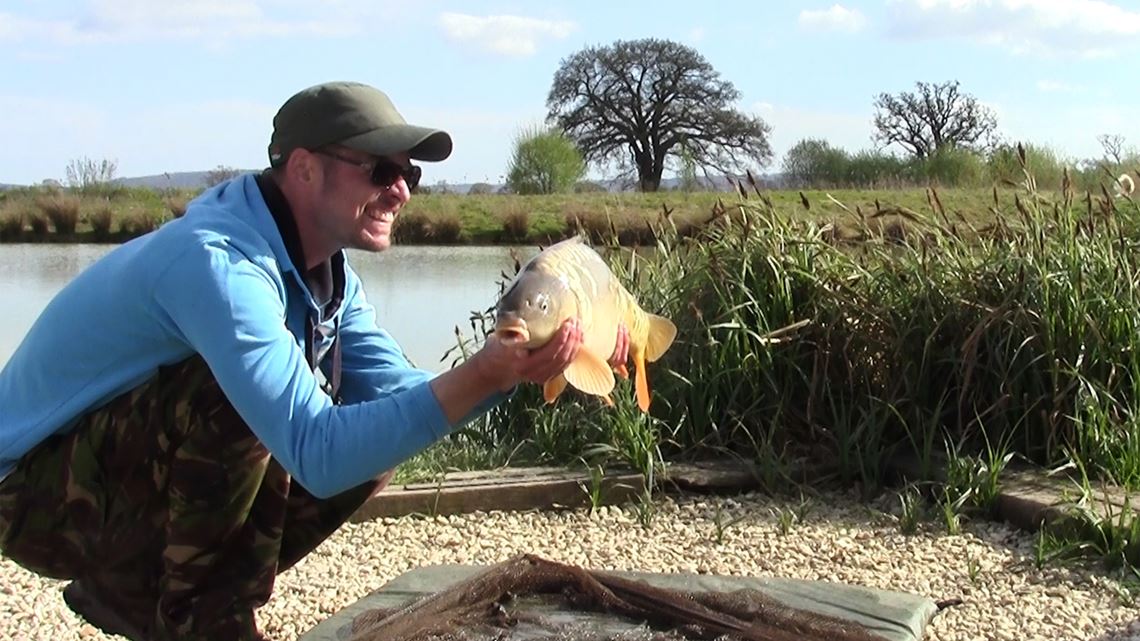 After a short fight, the 1st mirror of the session slipped over the net cord. A good looking fish of around 14lb which I guessed to be the average stamp in the lake. Video done, the fish went back, the rod went out on the same spot and I went back to water watching.

More and more fish were crashing in the bay to my right, so much so that I decided that it was worth baiting up and setting up one rod to fish that area. It was late enough in the day to take the gamble that other anglers weren't going to arrive and set up to my right or in the swim on the other side of the bay... From my swim, the fish were crashing between 12 and 14 wraps out, a bit of a chuck into the oncoming wind but completely doable with a PVA stick rather than a solid bag. So I popped the marker float up in the next swim inbetween 12 and 14 wraps, baited up pretty heavily with boilies, got a rod on the spot and waited.

Frustratingly, the island point rod produced 3 runs over the next hour or so and each one ended up in a lost fish! Time for a rethink as something was going wrong... I'd been advised to use small baits so stepped down from a 16mm boilie to a 14mm, dropped my hook down to a size 8 and slackened off my bait runner. I usually fish them pretty tight but I had a feeling the fish were getting bumped before they had a chance to run.

Speaking of boilies, this is probably a good point to mention what bait I was using. I've been a field tester for Innate Baits for a year or so now and had success where ever I've taken their quality boiles. However, this trip was a little different in that I'd been luckily enough to roll my own bait using my own custom recipe! We've been calling them 'signature' for the moment as the recipe is unique to the angler. My personal recipe was a spicy fishmeal base with tuna, chilli, robin red and a few other 'secret' ingredients. I have to say, the smell and colour was spot on, exactly what I liked and having had one fish already, I was hoping they'd produce a lot more over the next couple of days. 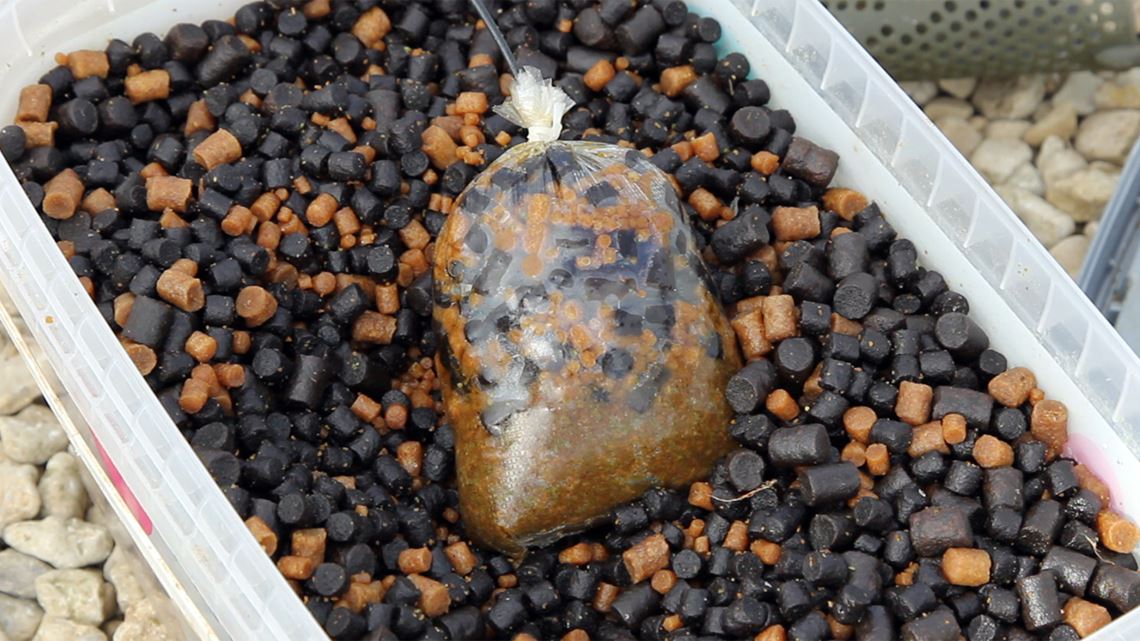 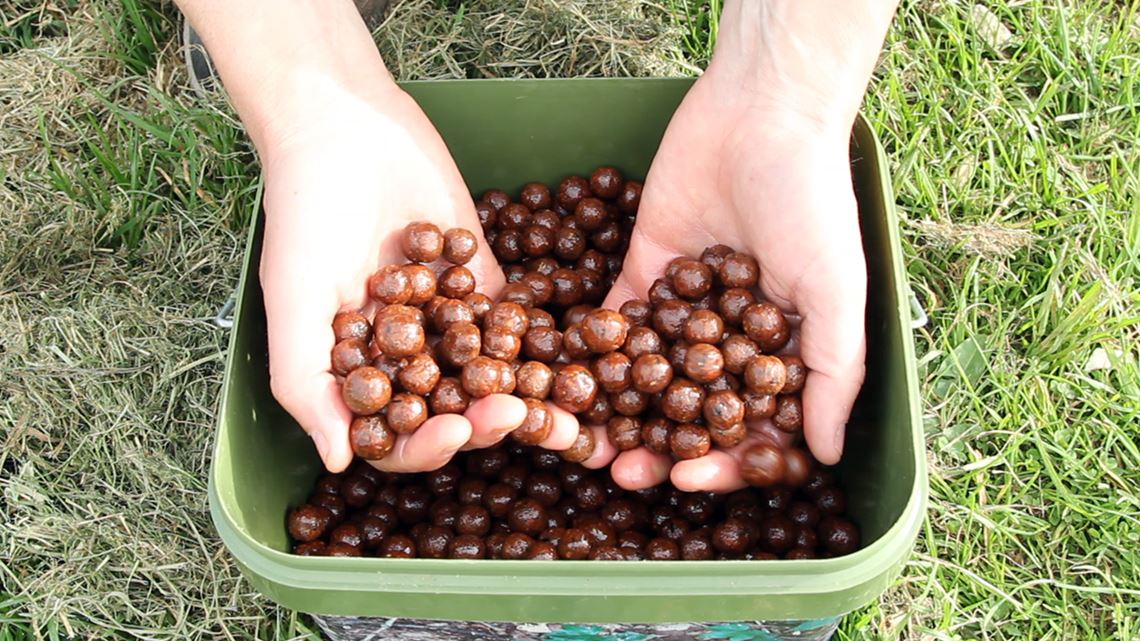 Anyway, back to the fishing! The adjustments to the rigs, baits and set up seemed to make all the difference as the left hand rod where I'd suffered the missed runs sprang into life. A nice fight later and a beaut 17lb mirror was on the mat, happy days. 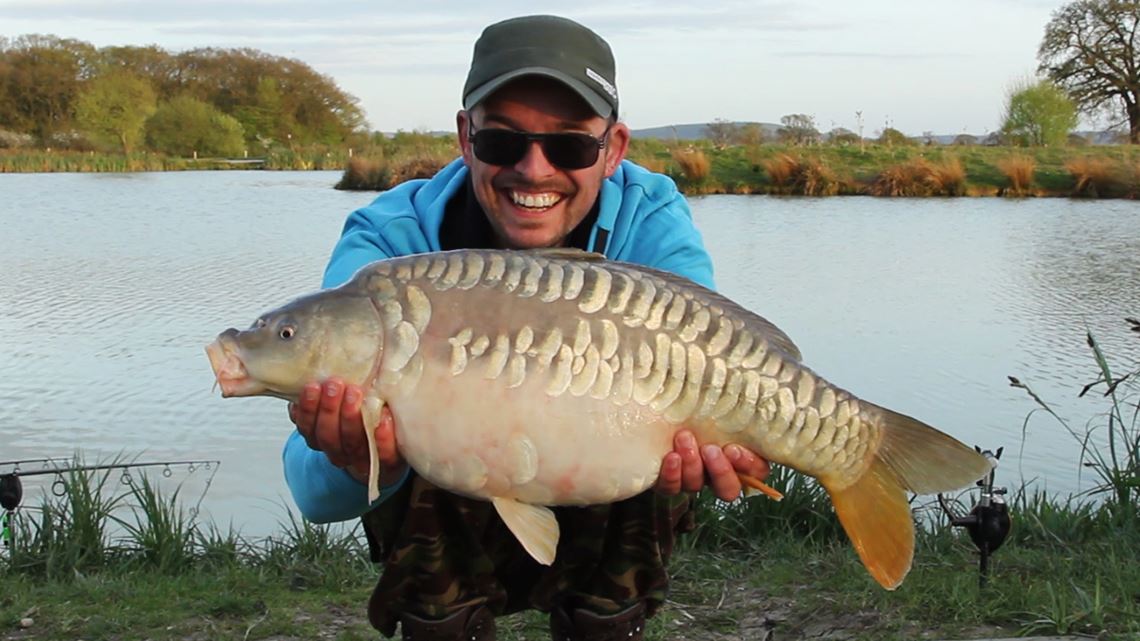 As the island point seemed to be 'the spot' I decided to get the spod rod out and get some bait going in. The light was rapidly fading and I figured getting a concentrated bed of bait in the same spot before total darkness set in was a good idea. So 10 spods of boilies and hemp went out and I started getting ready for the night.

Having seen so many fish crashing down in the bay, I was slightly surprised I'd not had a pick up... As luck would have it, just as I began toying with the idea of a recast, the right hand rod absolutely steamed off! 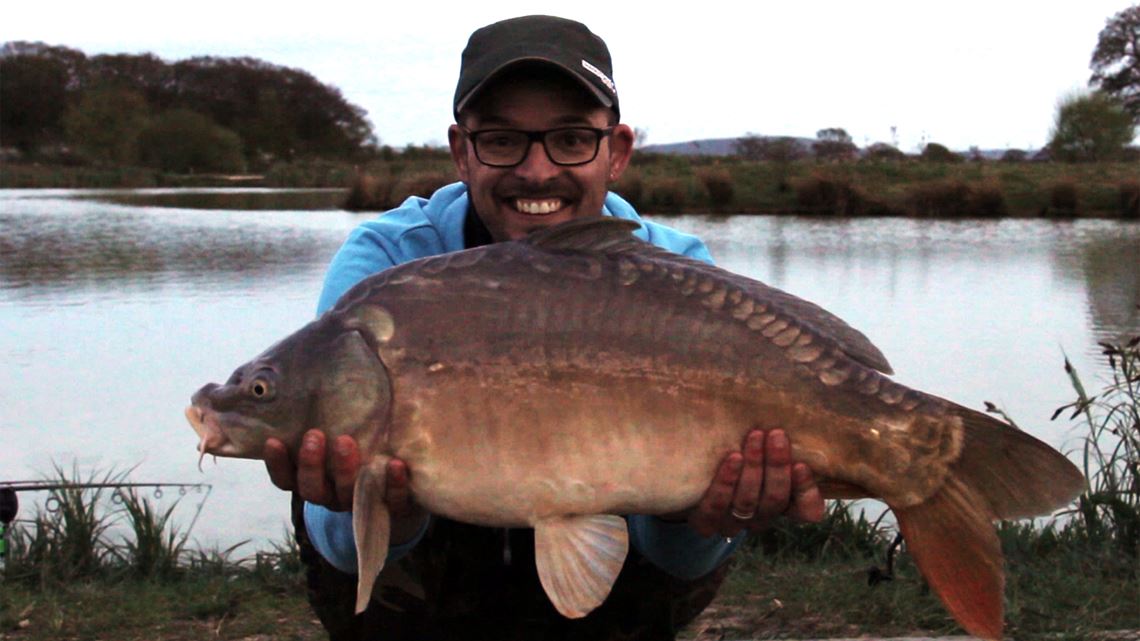 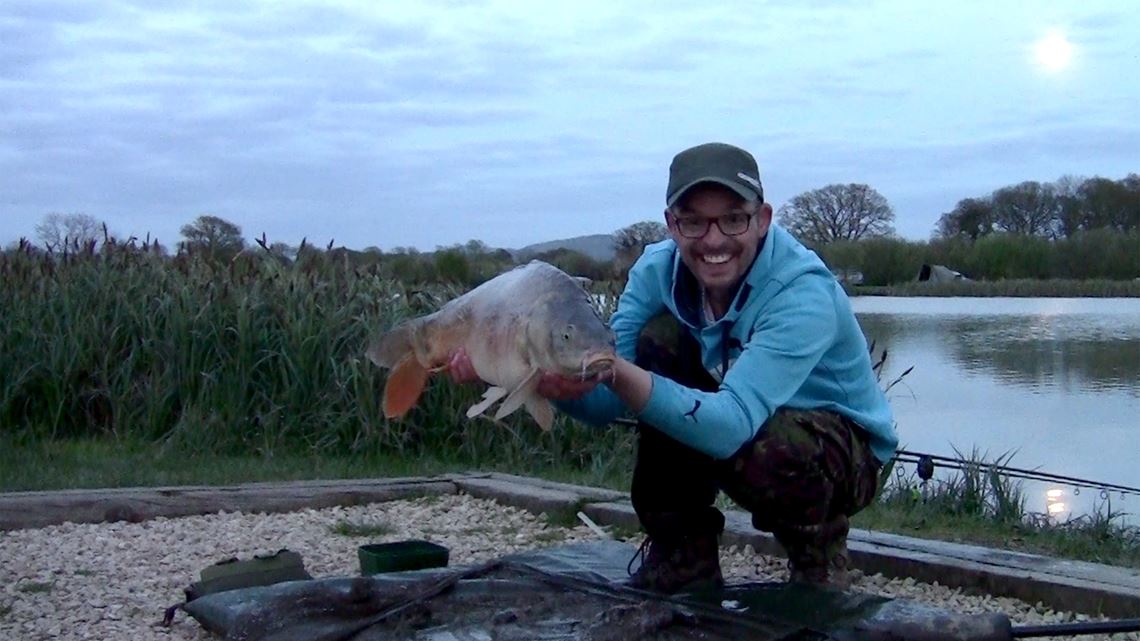 Another cracking fish, a stunning mirror of 17lb.

And after that, the flood gates opened... I had my 1st common, an immaculate beast of a fish that was just under the 20lb mark. 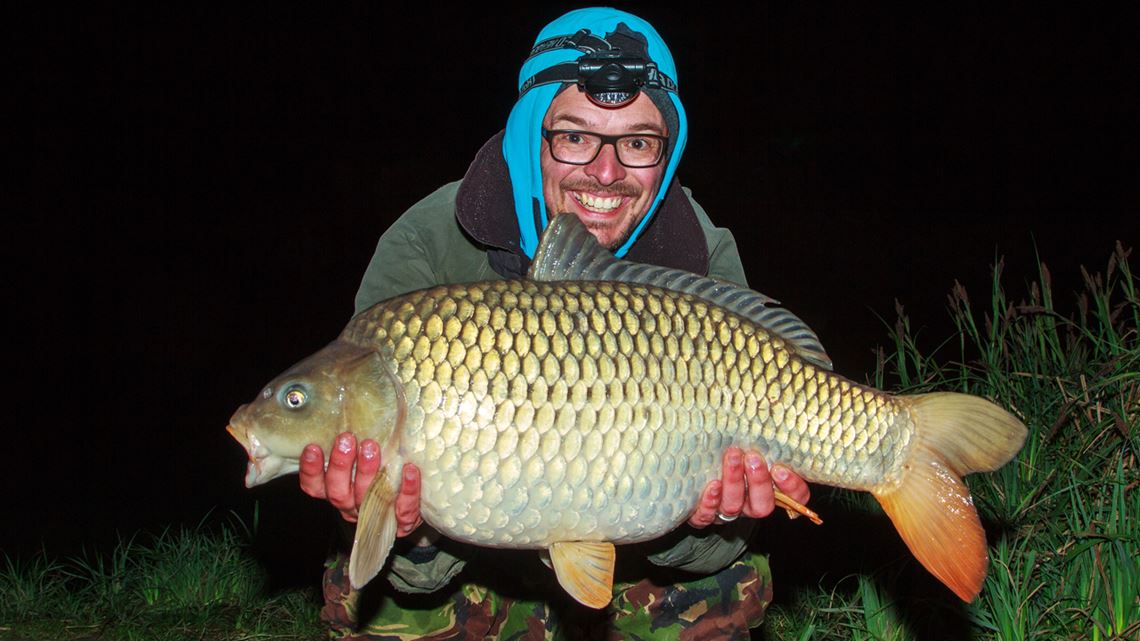 Then a couple of mirrors, a scraper 17lb and a smaller 14lb. 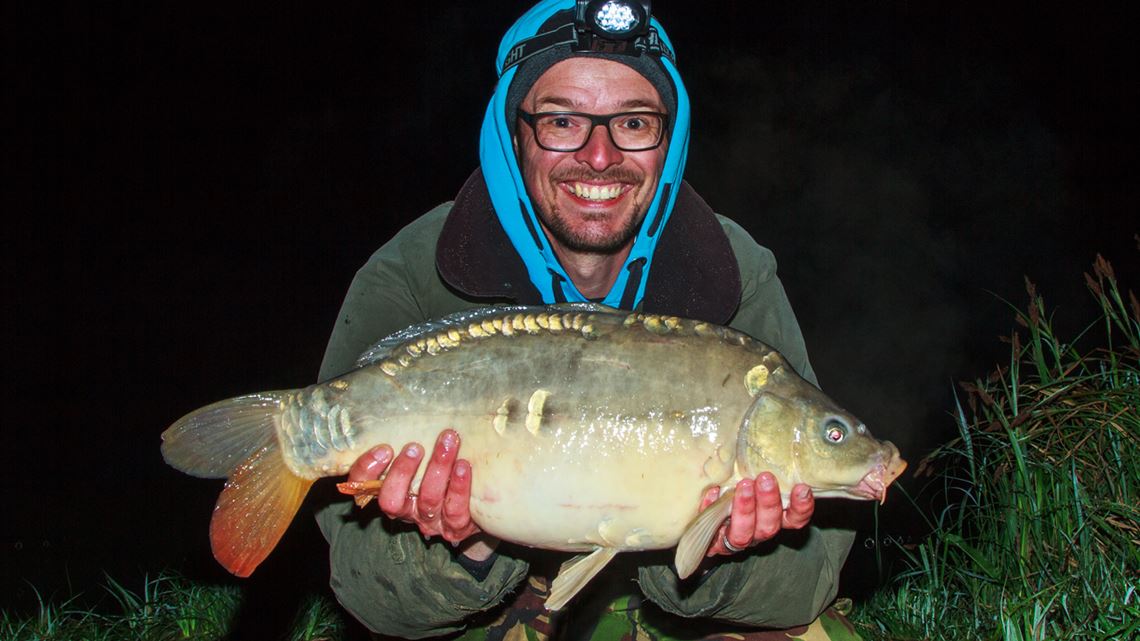 It was getting relentless... If I wasn't typing up rigs, I was spodding, or tying PVA sticks, or mixing more stick mix... It was near impossible to keep all three rods in the water so I dropped down to two in the end as it was more manageable!

One thing that did surprise me was the unhooking mat iced up! I didn't think it was that cold, but with a clear sky and a pretty much full moon the air was very thin... Not that it seemed to effect the fishing at all! 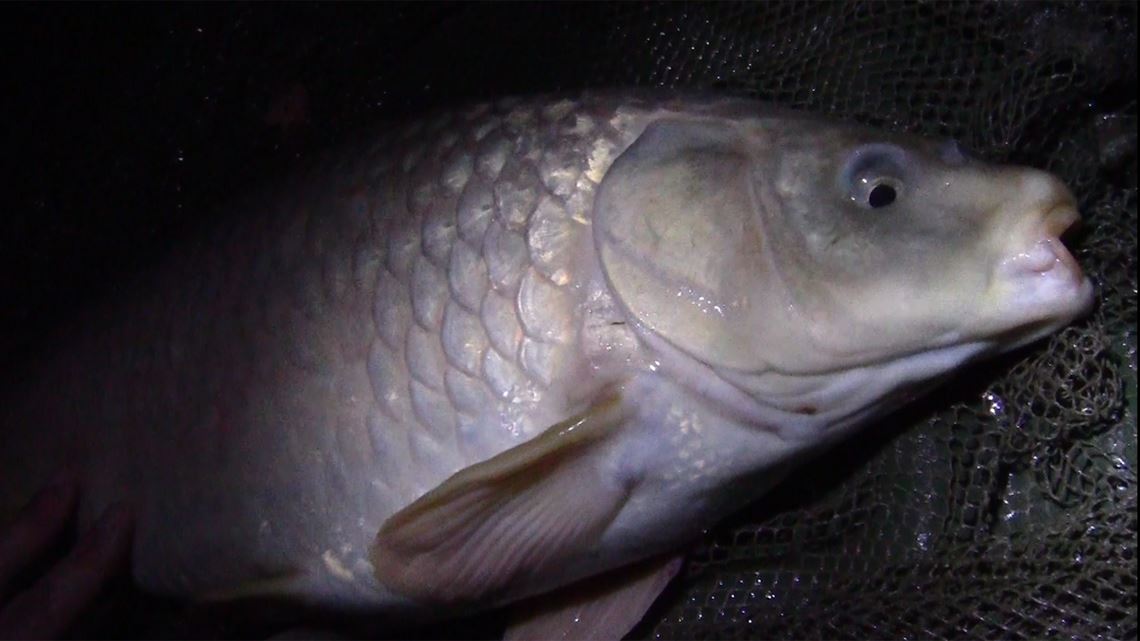 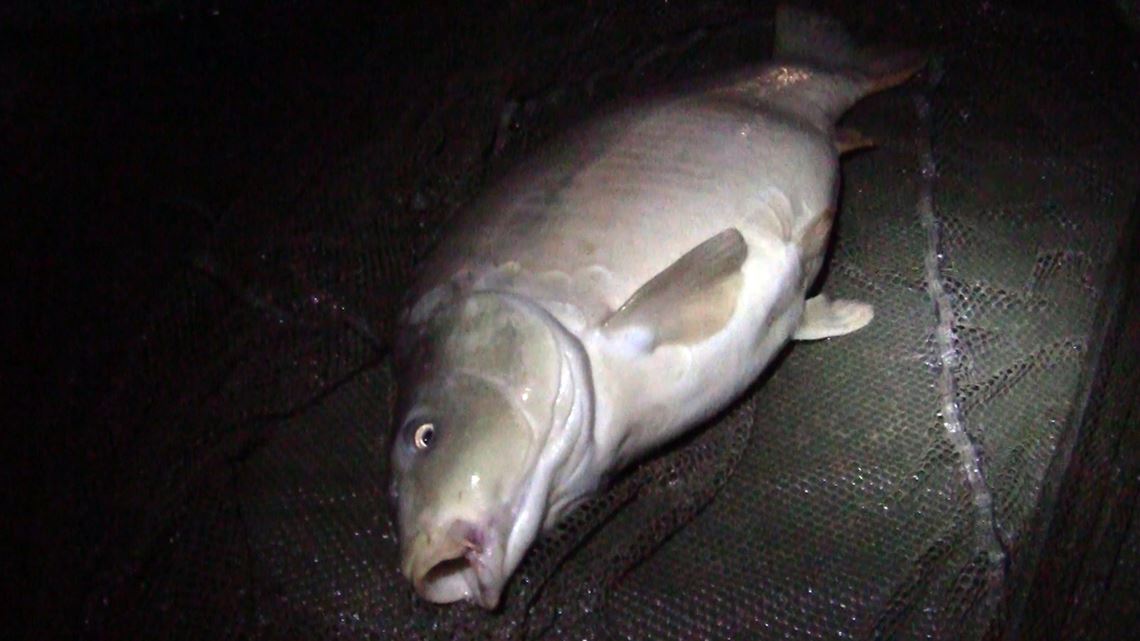 I had another couple of smaller commons, a nice low double mirror and then a real supprise - a 15lb catfish that took me all over the lake! 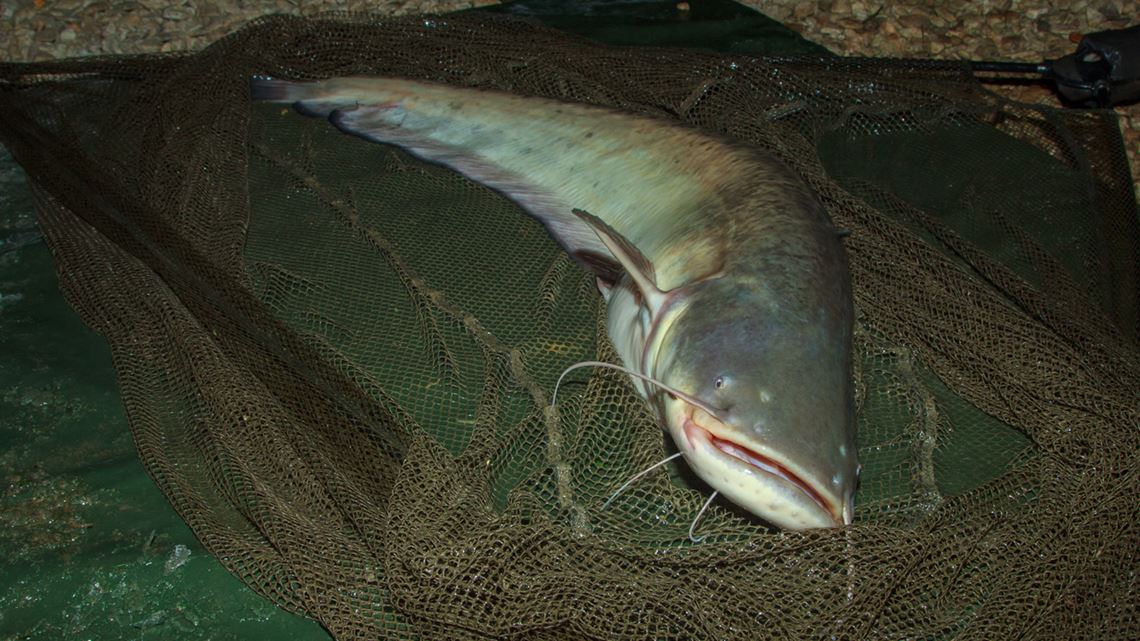 By the time the sun came up, I was exhausted. I reckon I'd had around an hours broken sleep and the bivvy was a mess of tackle, old rigs and bait - too good! The action seemed to die off slightly as the sun came up, so I decided to bait up and rest the swim for a while while I watched the sun break the horizon. It looked like it was going to be another beautiful day. 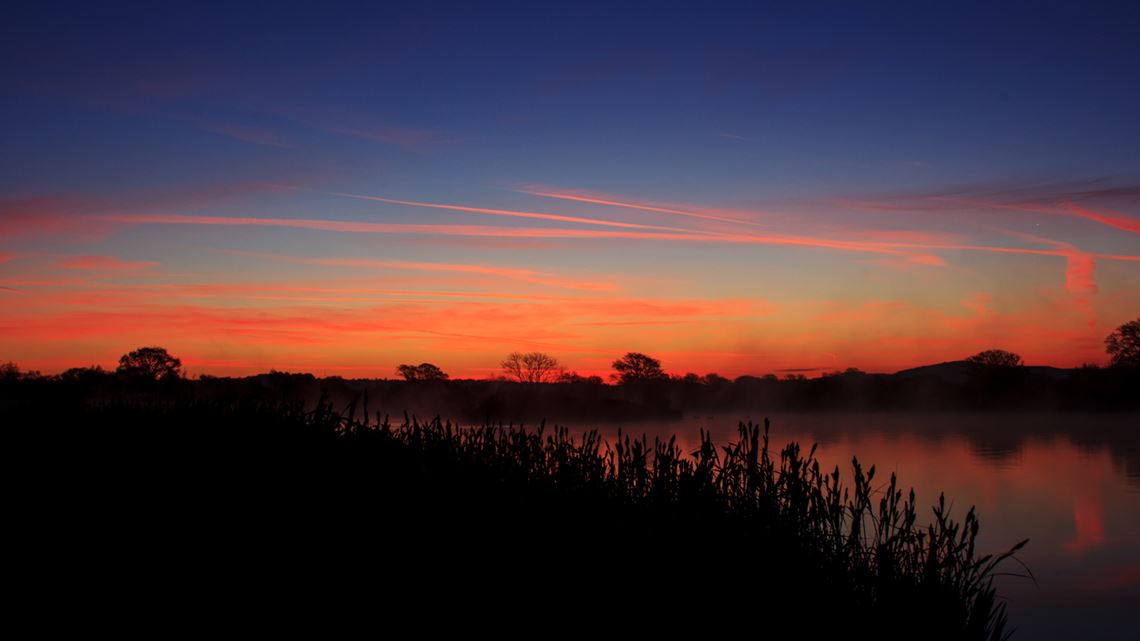 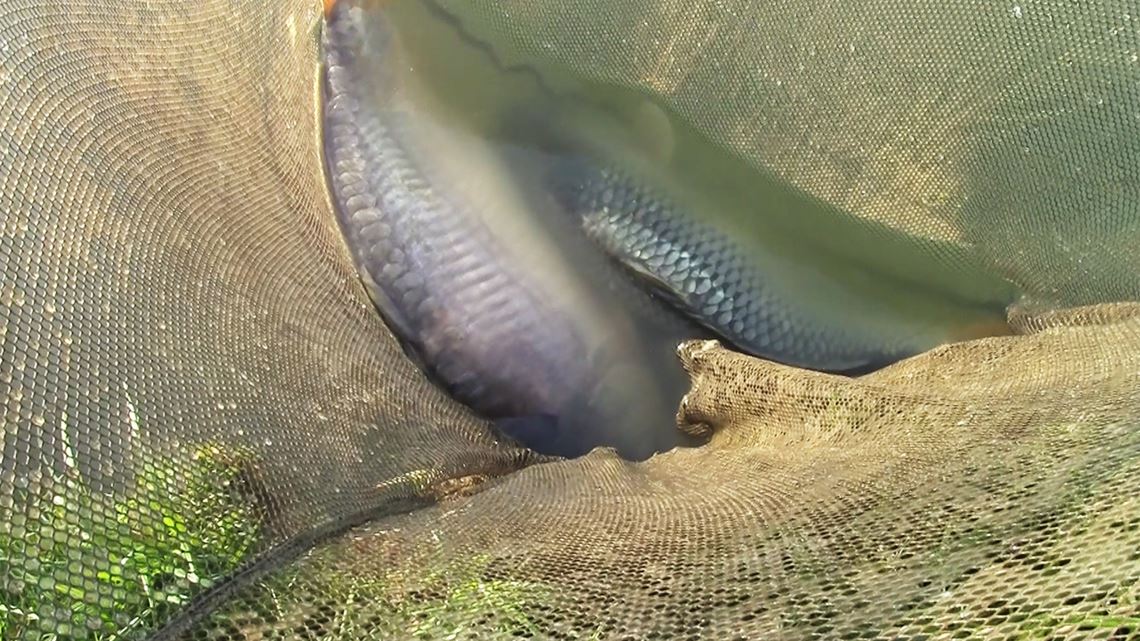 The rods went out and I climbed into my bag completely knackered but absolutely buzzing. I must've been asleep for about an hour as it was full sunlight when one of my alarms sounded. To be honest, I really thought it had to be another anglers and it took a good 10 seconds for me to realise it was actually mine! I managed to blunder out and grab the right hand rod but as I started to steer the fish back into my swim, the left hand rod started to run... Amazing! 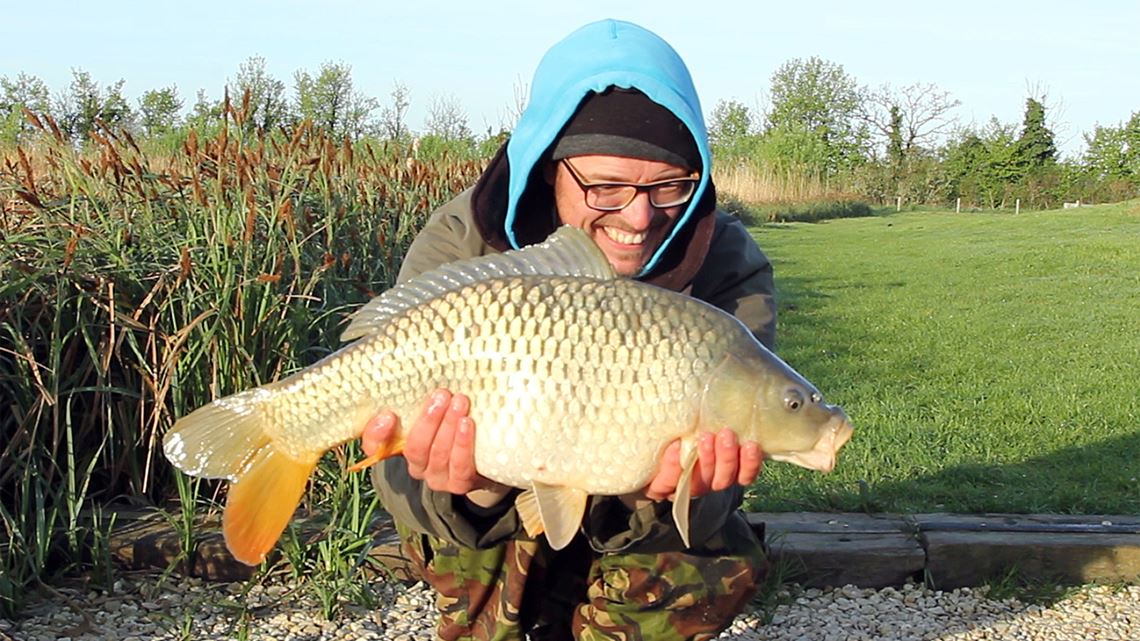 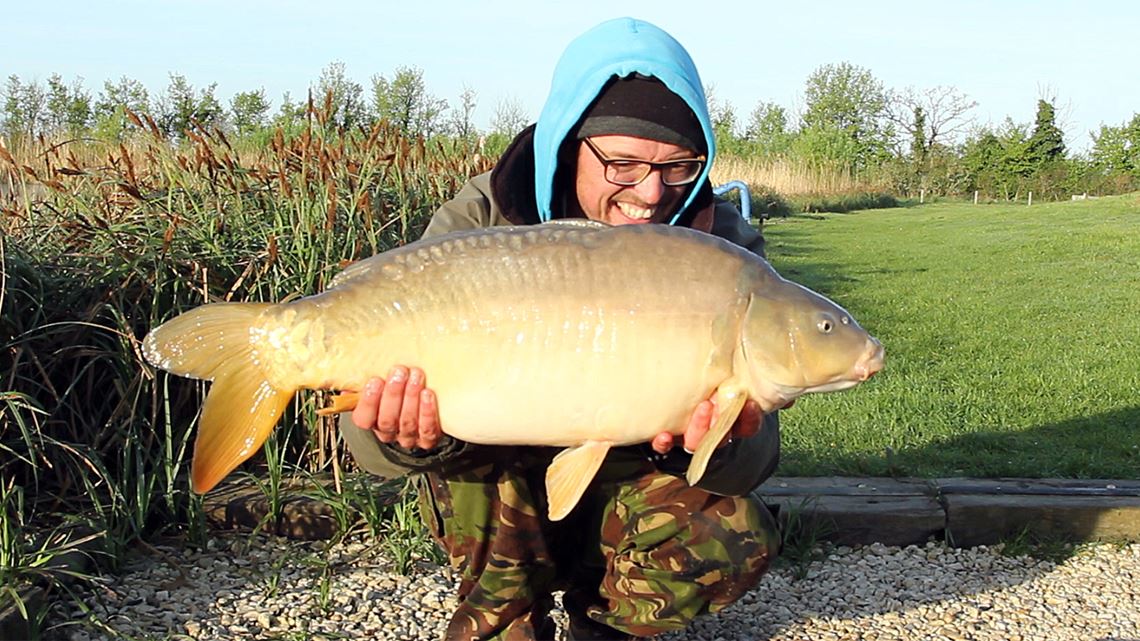 It's easier to say than do, but the advice is always to concentrate on the fish you're playing when you get a double hook up! Somehow, I managed to get the 1st fish in (a small common) and then grabbed the left hand rod to see if the fish was still on... The line was pretty slack as after an inital run to open water, the fish had run towards me and to be honest I thought I'd lost it. But as I took up the slack, it started fighting back! This one really went for it (or maybe I was just knackered?!) but after a hard fight a 20lb mirror slipped into the landing net. What a chunk!

It was with great reluctance that I packed down... My ticket was for 24 hours but after that session, I would've quite happily stayed on for another day!

A big thank you to Todber Manor - the fishing was fantastic and the facilities are top notch. I will be back, maybe to try out Big Hayes or to have another go at Little Hayes as it was just too good.

And a massive thank you to Innate Baits. The boilies really made this session and I can't wait to find out how they work on the next couple of venues planned for this trip.