Work has been mental of late... Long hours and a lot of stress... What I needed was a day on the bank!

Although spring has kinda sprung, it's still quite cold and even the runs waters are having their off days. So rather than head somewhere with monsters I opted to head somewhere smaller and (hopefully) easier.

I joined the Keynsham Angling Association back in October as they control part of the Avon and I my winter mission was to catch Pike. They don't have a lot of still waters but one that I was keen to have a go at is Century Ponds over near Keynsham.

It's quite a small venue consisting of 2 ponds set in the farm land in Stockwood Vale. I'd been over for a looksee last summer and it really reminded me of the venues I used to fish as a kid. There are loads of small carp to stalk in the margins of the slightly larger Island Pond and some slightly bigger fish to go at in the smaller Old Pond.

So the venue was set! My amazing partner granted me a full day freedom pass (ain't she great!) so I left around 6.30am to arrive at 7am. It was a beaut morning and the drive took no time. It's a bit of a bone shaking drive down a farm track to the ponds but once I'd negotiated the pot holes and got a glance of the empty car park I realised I had the whole place to myself - result!

I did have a bit of a plan in mind based on my reccy the previous summer. Back then, the margin cover was great with long reeds and lily pads covering the Old Pond and with it having the bigger fish in it, I'd decided to head to one of the margin spots for the morning with an idea of relocating to the easier Island Pond in the afternoon for some stalking once the weather had turned up.

Well, that was my plan... as it turned out, the margin cover was all gone! By the looks of it, some fairly hefty landscaping had been done and all the reeds have been cut back and piled up on the bank. The lily pads to had gone but you could see the tangled stalks growing back under the surface (a snag nightmare). It was a bit of a pause for thought but in the end I decided to opt for the swim I'd originally planned for, slap bang in the middle of the far bank.

Bait wise I'd decided to keep it very simple: a spod mix of pellets, sweetcorn and groundbait that could be balled into the margins and a small selection of hookbaits, namely sweetcorn and small washed out popups (that've been soaking in tigernut goo).

So the rods went out left and right in the margins with different baits on each, both in PVA bags of pellets with a handful of spod mix over the top and I sat back to watch the water. After about 20 mins, the bobbin raised to the blank on the right hand rod and came to a stop. Interesting... liner?

After the 1st hour or so on the bank, something dawned on me... I was sat in possibly the coldest part of the lake! The sun had come up behind the hills and was flooding across the lake but due to the steep incline the entire bank was in shade.

This time of year, as the weather and the water warms up, the fish start to move into the shallower areas. I already knew that the margin spot to the my right was looking good as I'd had a liner but further to the right of the reed bed was an area that had been in the sun for a good hour. I had a quick plumb and it was only around 4ft deep, perfect for bait.

So time for a move. I headed round to peg 14 which was almost opposite where I was previously fishing. The swim's winning feature was that it had a gap in the tree's that would allow me to cast right into the spot I'd found with an overhead chuck. Due to the chod on the bottom from the cut back reeds I decided to switch to a white Innate Baits popup that I'd had soaking in Tigernut Goo for a couple of weeks. They've gone a great washed out yellow colour and look great fished in a bag of pellets over the top of particles.

As the action had been non-existent and I was now backing onto the smaller (and easier?!) island lake, I decided to chuck a method rod out and see what I could find. I had loads of liners but no takers, my suspicion being that smaller fish were just bashing the method but there was nothing big enough to get the double sweetcorn bait in their mouths... 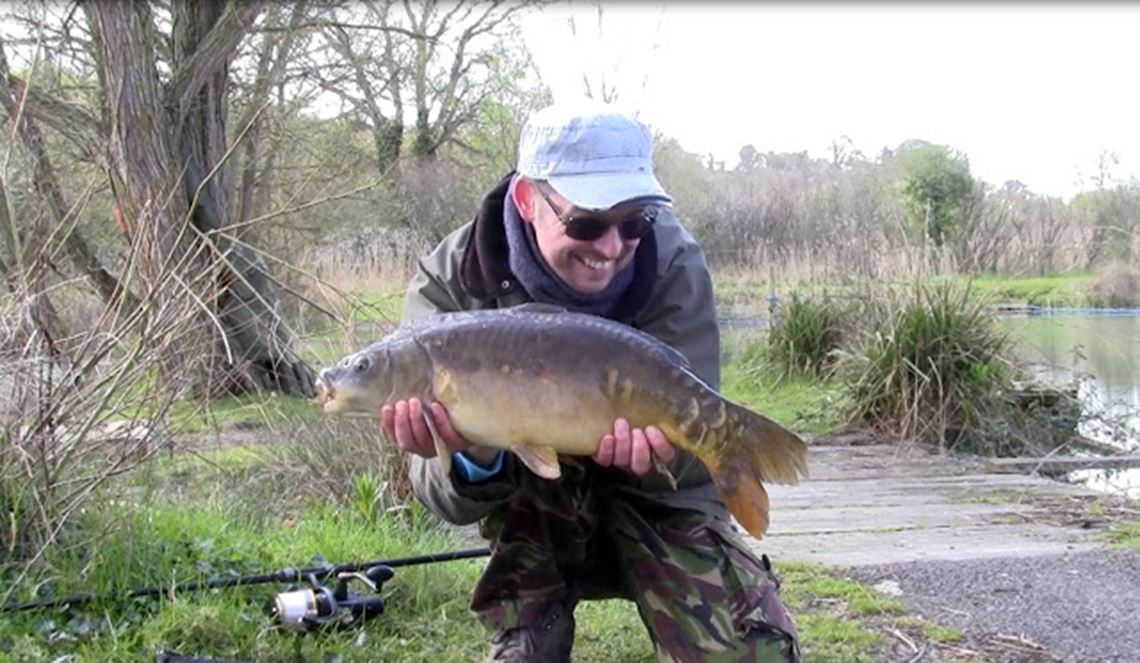 But all that was forgotten when the popup rod out in the old lake roared off! The move had paid off and it was fish on at last. A short fight later and the fish was on the bank, not a monster but I was off the mark with a nice mirror of around 10 or so pounds.

Back on the other lake, I decided to try a more traditional match bait and chucked out a cube of luncheon meat to a margin spot I'd been baiting with a couple of handfuls of pellets and corn. The rig had been in the water for all of 10 seconds before the rod tip swung round! Unfortunately, the fish managed to drop the hook but it was good to get a bite so quickly.

Things went a bit quiet for a while after that. I kept dropping in on prebaited spots on the island lake but nothing was taking. Then out of the blue, the popup rod on the old lake sprang to life! This time, the fish shot straight into the reeds and the line instantly locked up... I kept the pressure on but after a while it became apparent the fish had managed to get rid of the hook. The rod went back on the rests for 5 minutes, just to be sure but in the end I had to pull for a break. Luckily, the line snapped on the not meaning no trailing line in the water and I got the back lead, tubing and tail rubber back.

After than loss, I decided to concentrate my efforts back on the old lake but this fishing 'locked up', sitting on the rods in case one went. The left hand rod went back on the same far margin spot with a new popup and the left hand went out mid water with a stack of 3 real sweetcorn grains.

To be honest, I dropped off to sleep! The weather had really warmed up and it was nice to just sit in the spring sunshine and chill for a bit.

Around 3ish the balif came round and let me know that he'd be turning the pump that was directly behind me on. The lakes had apparently been suffering from overgrowing weed and lilies so he was going to add a blue dye to the water. Apparently the dye cuts the UV down in the water meaning the plants won't grow as fast!

As it caused quite a bit of commotion in and around the swims I was fishing, I decided to head down to the top end of the lake and fish two swims that backed onto each other. Over the last couple of hours of the session, I had two small carp out of the old lake and two out of the island lake. Nothing massive, all under 10lb but lots of fun.

So all in all, a good day! I think once the weather stabilises a bit and we move into summer proper, both lakes will offer a decent challenge for day sessions. I'm really looking forward to the lilies and reeds growing up in the old lake as I think they'll give the margin cover that I love fishing in. The idea of sneaking round the overgrown areas, dropping in handfuls of pellets and dropping a rig in to catch wary carp really appeals.

From what I've been told, there are some decent fish to the size of 25lb+ in the old lake so I'm thinking one of those beauties maybe one of my summer targets this season.