My 1st Session On The River Avon And My 1st River Pike!

Weather?! Pah. Lets go fishing! It maybe that the weather man was predicting the worst rain and high winds we've seen all year but what the hell, I was desperate to get out the rivers with an aim to catching a pike!

Dad and I have been searching for a club to join for a couple of years now. All the river stretches (with the exception of the Conham Water Park and Saltford) seem to have been snapped up by clubs and it's a tough call to find one that covers everything you want...

In the end, we opted for the Keynsham Angling Association as it has excellent stretches of the River Avon and the River Chew. They also run the excellent looking Century Ponds over in Keynsham that I'm very keen on giving a go once we get back to summer. At £20 for 13 months membership, it's a bit of a bargain!

I'd taken a walk with the kids the weekend before at the Swineford end of stretch which runs for three fields starting at the excellent Swan Inn pub. There were a couple of anglers in the 1st swim we found and they'd just had a double figure pike out! Not bad, not bad at all. Although there were no other anglers in the rest of the swims, the river looked very inviting and perfect for targeting pike.

So the date was set and I arrived in the dark the following Saturday at a very ambitions 7am! Trudging across the 1st field in the pitch black with my gear was no picnic... As predicted, the weather was grim: although it wasn't yet raining, the wind was hacking across the fields and the footpath was very wet and muddy... 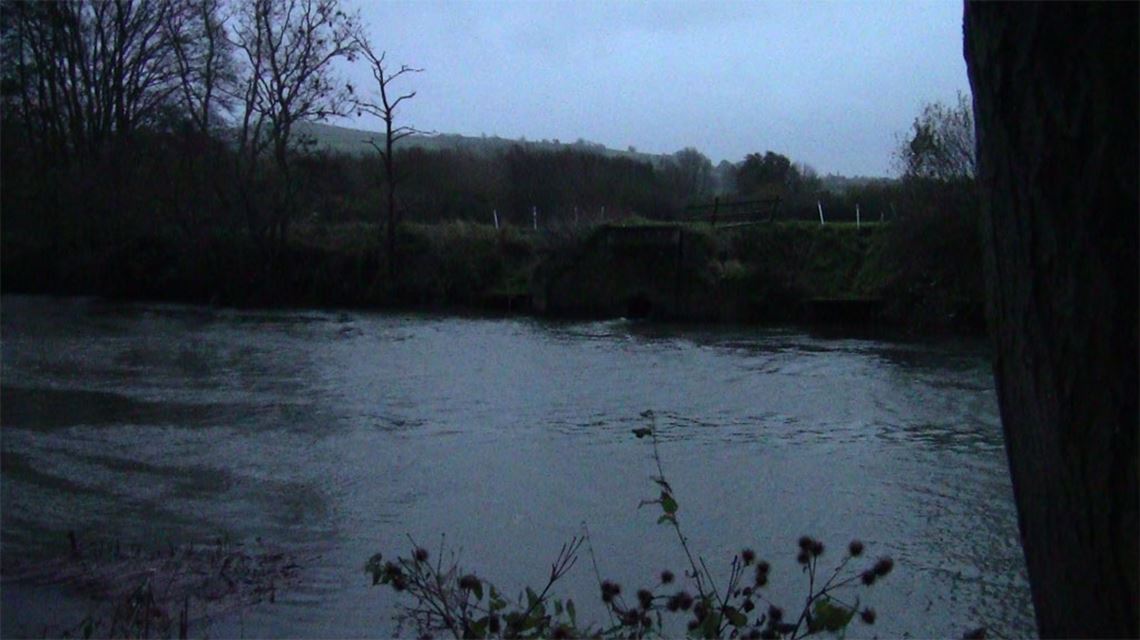 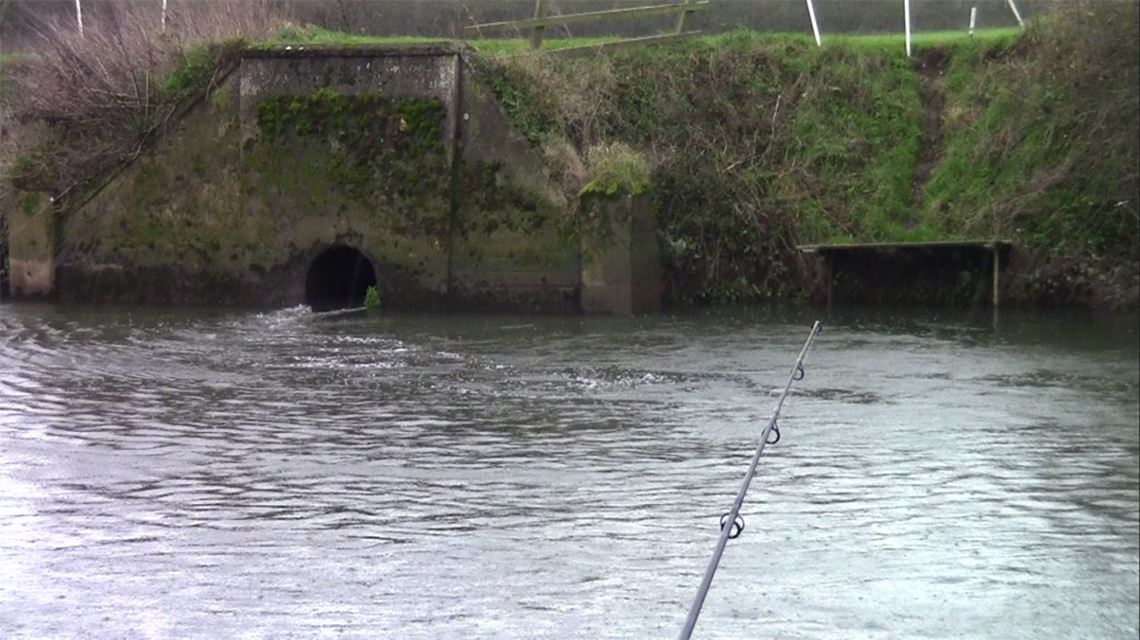 Not surprisingly, the target 1st swim was empty! I wonder why?! Although Dad hadn't yet arrived, I was eager to set up which as it turns out could've ended in disaster... As I'd brought frozen baits (a triple pack of mackerel from Scott Tackle) they'd need defrosting before I could separate them. Easy I thought, get a bucket of water and let them cool off in there...

Not so easy: a very steep and slippy descent down the bank side saw me nearly ending up in the very fast flowing river and getting back up again was near as dammit impossible! So, lesson learnt: in dangerous conditions, never fish alone, have a bit of patience and wait for your Dad to arrive.

But with a bucket of water obtained and the bait starting to defrost, I decided to get the rods set up and ready for when Dad arrived. I'd decided to fish both rods on ledgers as the flow was going to be fast. Having checked out countless options online, each rod had a swivel 3oz gripper lead, a bead and helicopter sleeve so the rig would 'run' with little resistance and a shop bought wire trace with two trebles. Compared to the carp set up, this was simple!

Dad soon arrived with the rain and after walking him back through the fields, it was time to get the rods out. Finding a slack spot was tricky but the luckily the swim offered lots of options: there's an inflow pipe directly opposite, with a platform either side and a fallen tree to the right. Once we'd found the slack water in the gloom, the 3oz leads helped keep bottom and we were fishing!

We had a few knocks and taps to begin with but nothing positive. I had an experiment trying to 'twitch' sprats (I'd managed to pick up 10 or so from the supermarket, either to use as bait or as prebaits) but the weather and treacherous bankside conditions made it very difficult to keep active.

The first sign of a fish came at around 10ish when Dad noticed a string of sharp knocks on the right hand rod out in the bay by the fallen tree. These were far more positive than any other signs we'd had (which we'd put down to the flow or possibly eels?) and as the bobbin started to move along with the rod tip I slipped excited over to the rod... could this be my 1st river pike?!

I'd practiced in my mind how to 'set the hooks' but practice is no substitute for the real thing! I picked up the rod, wound down and hit (what I hoped was) a fish with a hard sideways strike and...

What a fight! The fish took off downstream, then came across the river, then tail walked in front of the swim, then dived into the reeds...

I was very, very glad Dad was there not only to offer advice but to help me net it as getting down the bank side with the landing net and rod wasn't an option.

In the end, a fine looking double figure pike sat in the landing net. To say I was made up was an overstatement, what a result! 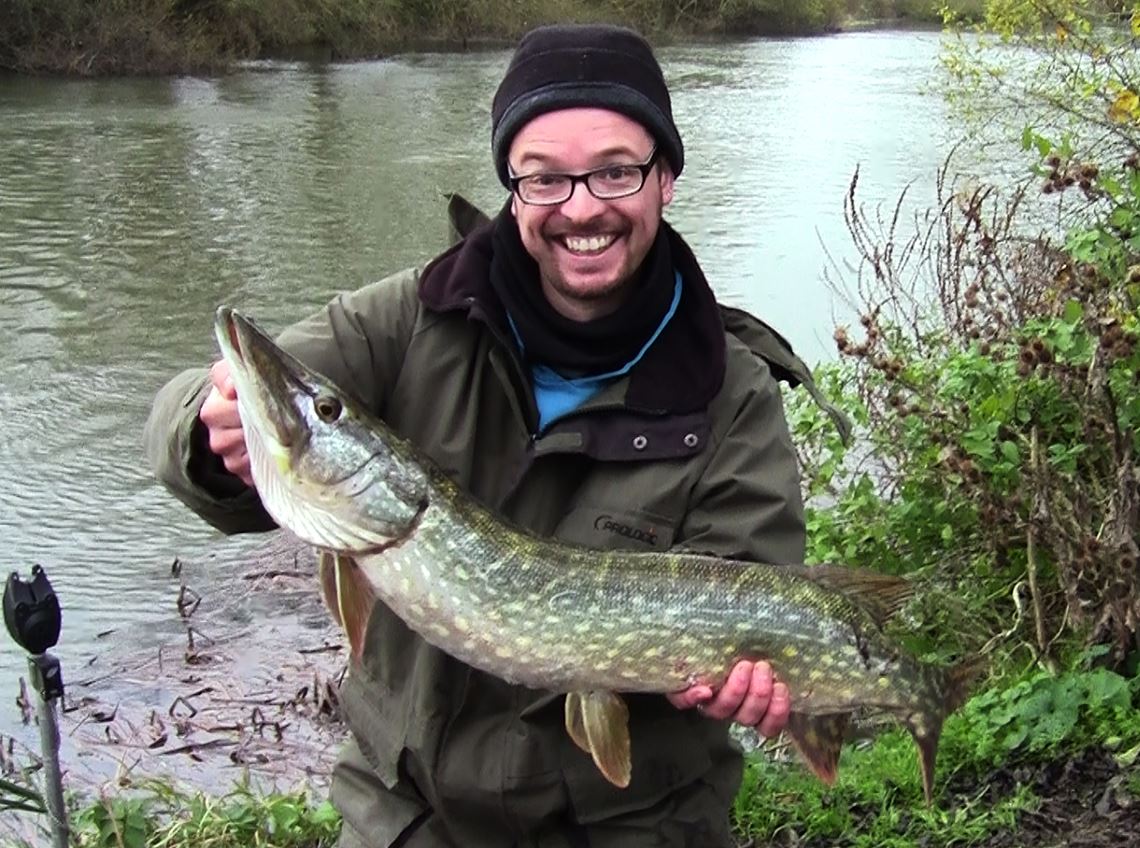 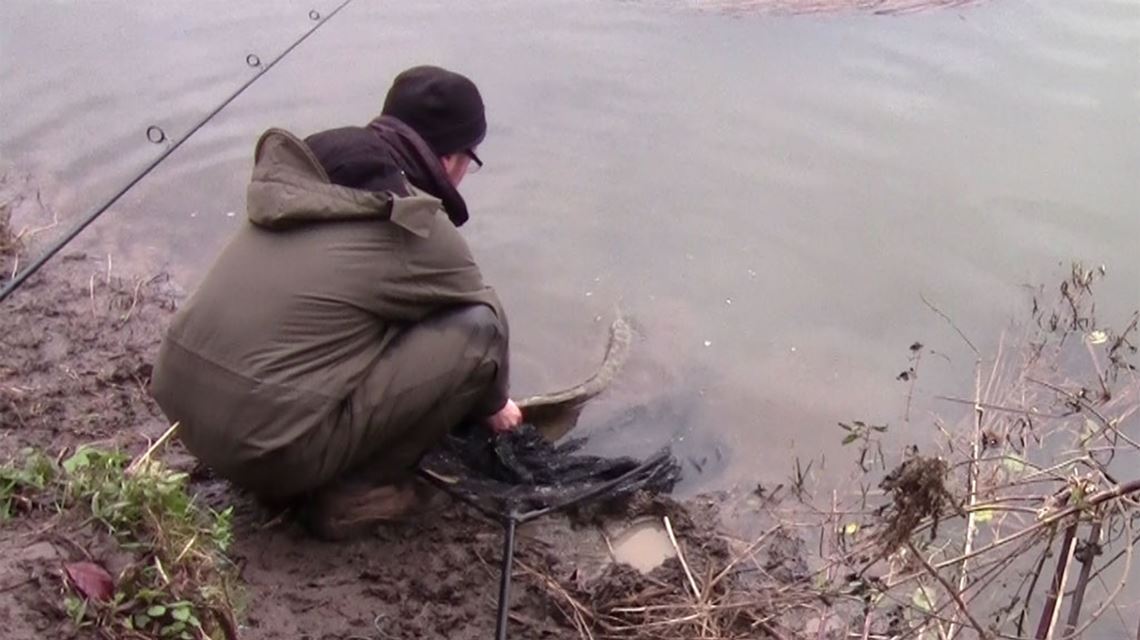 Then came the tricky task of unhooking the fish... I've not done this for over a decade and the last pike I handled was considerably smaller and from a lake with a nice steady platform. Not a slippery as hell bank side with a river charging by...

Putting your hand inside a pike's jaws and then diving in with a pair of forceps is and interesting experience but finally the prize was held up for the camera. Happy days!

After that excitement, the weather really set in and we decided to head to the 2nd swim I'd scoped out as it offered a bit of shelter under a fallen tree. As it turned out, the swim wasn't as 'pikey' as I'd first imagined and after braving the elements under an ominous creaking tree for an hour or so, we headed back to the 1st swim.

Although we had no more pike, it was a really exciting day's fishing. I learned loads and to catch one on my first visit to the river was a massive confidence boost.

I'm really, really looking forward to winter on the rivers!