Time is short at the moment! The last 4 weekends have been stacked, meaning apart from short evening sessions up at Bitterwell Lake, I've not been out on the bank for a decent block of time for a while now...

But magically there was a gap this Friday with child one out on a sleep over and no plans for the Saturday! Weather wise, it wasn't looking too clever: the rain was set to kick in around 2am, getting heavier around 4ish and then petering out in the morning... But what the hell! It's rained pretty much every session I've been out on in the last 2 months, so why should this trip be any different?!

I decided on Windmill Fishery out on Henfield Road, heading out of Bristol towards Westerleigh. I'd fished there for the 1st time back in June and had a good session. It's not an easy lake but in a way, that's what I fancied: somewhere that's a bit of a challenge where I could push my self a bit and get a decent nights sleep.

Due to work, I didn't get to the fishery until 7pm and the sky was already darkening. The lake was completely deserted... Result! I had the place to myself ;)

As it's not an easy lake I decided to hedge my bets and head to the swim I occupied on my last trip. It'd done me well on that session with three fish coming out. The spot itself is right in the middle of a junction that the canal joins the thin end of the lake into the 'bowl' with the island at the larger end. As there's not much in the way of features (the margins are impossibly shallow) it made sense to pick a swim that commanded a lot of water and therefore options. It also meant I didn't need to do any feature finding as I'd already mapped out the swim and knew the depths and spots where fish had come from before. The good news was the water level (a real problem on this lake) was up at a reasonable but still not full level and that meant the deeper holes I'd found before would be deeper still and would (hopefully) still be a holding point for the fish.

It was a bit of a rush to get the rods out and the swims baited before darkness descended - the long summer evenings are going and it was pretty much completely dark by 7.45pm... But I've set the bivvy up in the pitch dark before and the gathering rain clouds where an incentive to get the job done quickly ;)

I was pleased with the set up and everything felt good for a bite: one rod went out with a Sticky Baits 'The Krill' boile in a PVA bag of pellets to the swim directly in front of me towards the bigger bowl in the lake and the 2nd rod went out in the canal with a small white popup, again in a PVA bag of pellets and hemp oil. A few scattered freebees around the spots and that would do it.

So I got my head down!

For once the weather report was spot on and the rain started at pretty much 2am on the nose. I'd had liners all evening with nothing more than slight twitches on the bobbins but at 2.30am the bowl rod signaled a dropback bite. I blundered out of my bivvy and managed to get to the rod to see the bobbin hit the deck and then... nothing. I couldn't see anything in the water in the dark so I had no idea where the line was so I took a chance, picked up the rod and stuck into thin air! A bit of frantic winding later and I connected with the fish who must've picked up the bait, hooked itself and then instantly run towards me and then right down the canal!

To be honest, I don't think it'd realised it was hooked until I put some pressure on the rod at which point it kicked off and began to put up a fight. It's always exciting hooking into a fish in the dark as you've no real idea of what you've got until its on the mat. This one was certainly 'plodding' which is always a good sign. After a bit of a stumble down the bank and a few lunges at the net a beaut mirror carp slipped into the net! Start to finish, it could only've been 10 minutes at most but when you go from fast asleep to putting what felt like a good fish on the bank, it's pretty exciting! 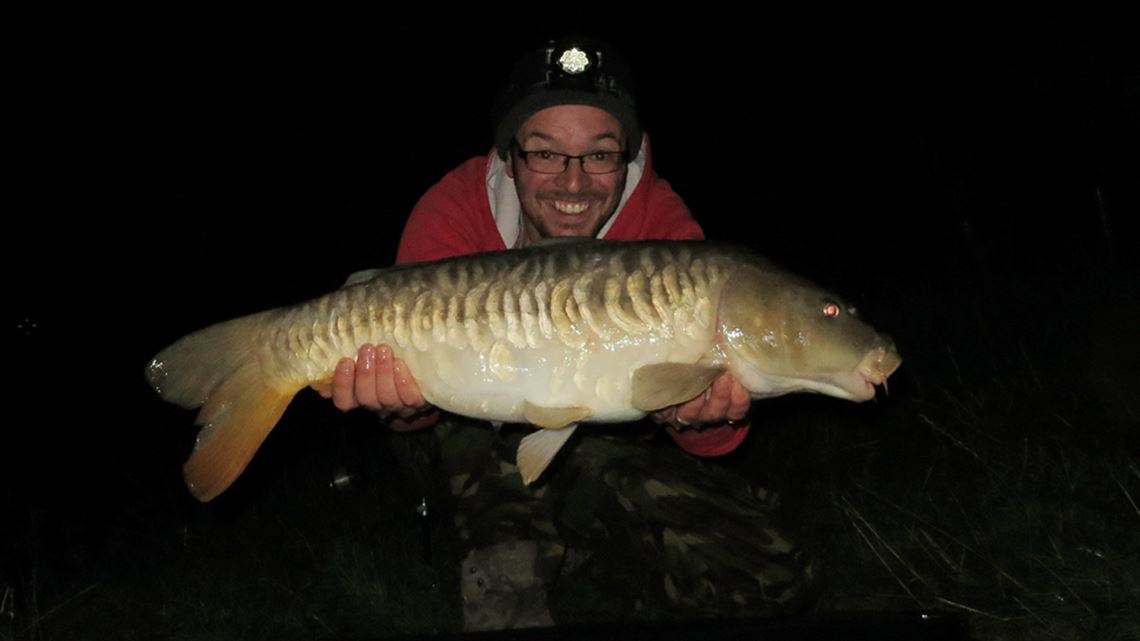 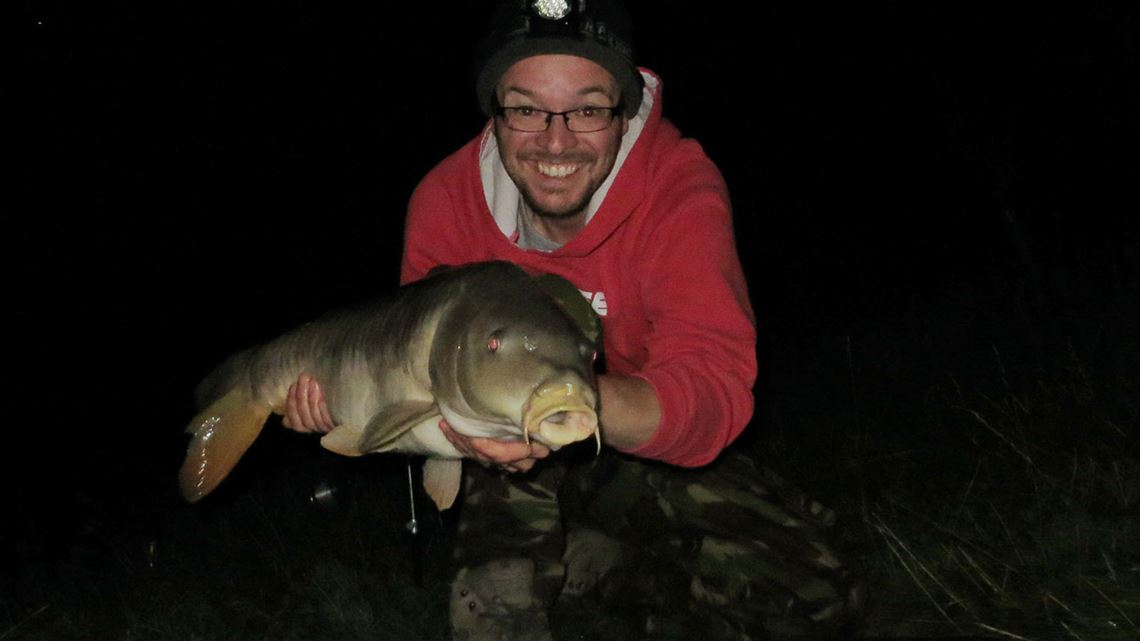 The fish turned out to be an in pristine condition mirror carp that took the scales round to 17lb - not a bad start to the session ;)

One thing that struck me was how large the mouth was: you could've fitted a tangerine there!

Fortunately for me, the fish had been kind enough to come in a gap in the rain. But by the time I'd slipped the fish back, set about getting the rod back out, rebaiting and getting back to bed it was hammering it down...

After a good few hours kip I had another another drop back bite at around 5am, just as a bit of light came in to the sky and the rain stopped again. This was from the same spot out in front of me, again on the Krill boilies. As with the last fish, it zoomed off down the canal and after a short scrap a nice 15lb common was sat in the landing net. 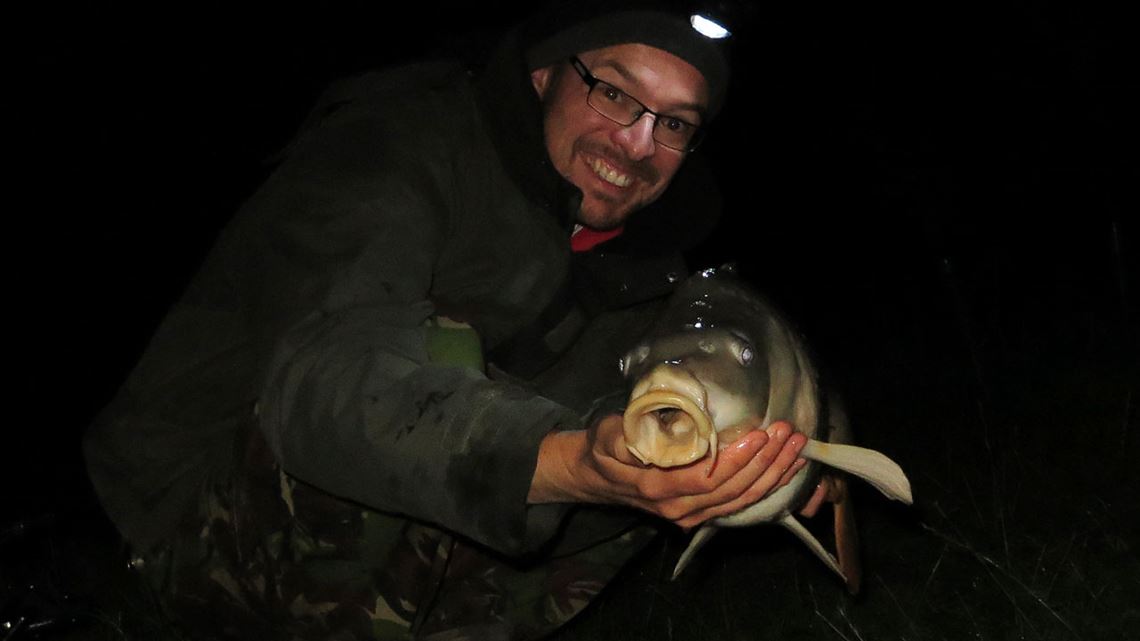 It actually looked like it was going to be a nice morning as there was a real orange glow in the sky over the lake. But it soon turned steely grey and as before, by the time I'd sorted out the rods again it was chucking it down. But having had two fish, I wasn't too bothered! In fact, it was great to crawl back into the sleeping bag and fall asleep again...

I woke up again around 9ish after the canal rod had registered a few beeps. Shooting out of the bivy to check the rod, I noticed that the tip was springing back and forth - an aborted take? Around 10 minutes later it seems the fish came back for another go as the rod just screamed off! This time though, rather than skooting down the canal, the fish headed out into open water towards my other spot.

This fish was very angry and put up the best fight of the three that came out in this session. Another 15lb common, too good ;) 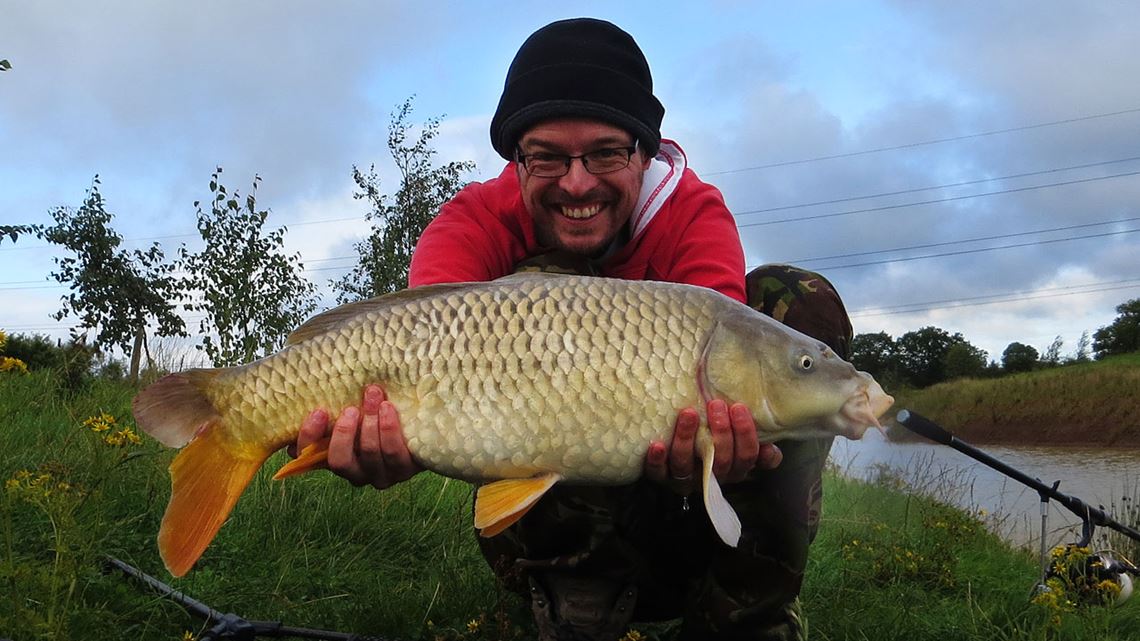 The sun came out after that and the bites dried up with it. I packed down in the sunshine and left around 11ish having had a brilliant session: a perfect mix of much needed sleep, relaxation and some cracking fish!