After suffering my 1st blank in ages at Ham Pool last week (looking back at blog posts, I think the last one was 'A Spot Of Post Xmas Piking' back in December 2013?!), I desperately needed to go somewhere where we'd were guaranteed a bite!

So Lower Kilcott Farm was an obvious choice. It's a small farm lake (more of a pond really) in the Cotswolds midway between Dad and myself and a perfect place for winter fishing as it's rammed with fish. As my daughter Lilly-Grace would be joining us for this session, it had to be a venue that'd keep an enthusiastic 6 year old busy too.

As it's a small venue with limited swims, we decided it was important we arrived early so I organised to meet Dad between 6.30 and 7.00 to make sure we had a bit of choice. I woke Lilly-Grace at 6.10am after having loaded the car meaning we were on the road and rocking out to Royal Blood on the M4 by twenty past ;)

A very easy drive saw us arrive at the lake around 6.50am to see one angler in my favourite far corner swim.... But the good news was Dad had already bagged the other corner swim at the back of the lake meaning we could all fish in a row like gnomes and pretty much have the road bank corner furthest from the farm house to ourselves! Well worth getting up at stoopid o'clock...

As predicted by the weather man, it was grey and cold but fingers crossed the wind and rain would keep at bay - I think even L-G's enthusiasm would be dampened if the weather turned?! After we'd said hello to Coco (Dad's gorgeous spaniel, another requirement of venue choice was dog friendlessness!) we set about getting the rods in the water.

Your gonna catch no at Kilcott no matter what so it's a great place to try out some new or little used techniques. For me, I really wanted to try out float fishing to target the excellent silvers in the lake but I also really wanted to try and find some of the bigger carp. On my last trip, I managed to get fish to around 10lb - nothing massive but I knew from a trip in the summer that a 15 pounder had come out. So rather than going for everything and anything I decided to go big on the bottom bait rod, getting the boilies piled in and a really light float rod for the silvers. Lilly-Grace opted for the feeder with liquidized bread and sweetcorn on the hook and I had a feeling she'd be pasty bashing in no time...

True to form, the initial action was hectic! Lilly-Grace had a good run of 4 or so little carp on the feeder rod using liquidized bread in the cage and real sweetcorn on the hair before Dad and I even managed to get a line in the water! My bottom bait rod rattled off within 10 minutes (no surprise there, that's why we came to Kilcott!) with a little common of around 4lb, about the stamp size of the fish in the lake and a great start.

As mentioned, I was determined to practise my float fishing as I'm really not as good at it as I'd like to be. Using sweet corn on the waggler was only catching me carp so I switched over to some maggots and casters (thank you Dad!) after 10 minutes in an effort to single out a silver. It worked! I missed more bites than I hit but did have a great selection of rudd and roach which was great fun on light gear.

The bottom bait rod had been strangely quiet after that 1st run. I worked through a couple of different popup options and even put a zig out as the sun tried to make an appearance (I'd had great success with Zig's on the last session when it was much sunnier). But the hours ticked by without a bite... Not that it was a problem as a combination of Lilly-Grace catching more fish than Dad and I put together was keeping me more than busy... As was keeping her fed! She can eat that girl... which is amazing as she's skin and bones, don't know where she puts it.

So I Switched the bottom bait rod to Celtic Baits Nut Mix boiles and baited the 'bowl' of water to my left heavily with boiles and a mixture of pellets.

Around 12ish, the bobbin dropped to the floor and the line went slack... Drop back? Just moved the lead? Then the line slowly tightened up! What the hell, struck into what I was expecting to be a liner and realised there was something attached!

To be honest, I didn't think there was much on the end - the fish came in slow and steady and didn't really put up much resistance. But when it came to netting it, we realised it was something of a beast cos it wouldn't fit in the landing net! I'd only brought my small spoon net thinking the fish in Kilcott where quite small but this one was hanging out of either side of the net...

Amazing - a really solid (if slightly sleepy!) mirror carp of 18lb. From a tiny farm lake. too good ;) 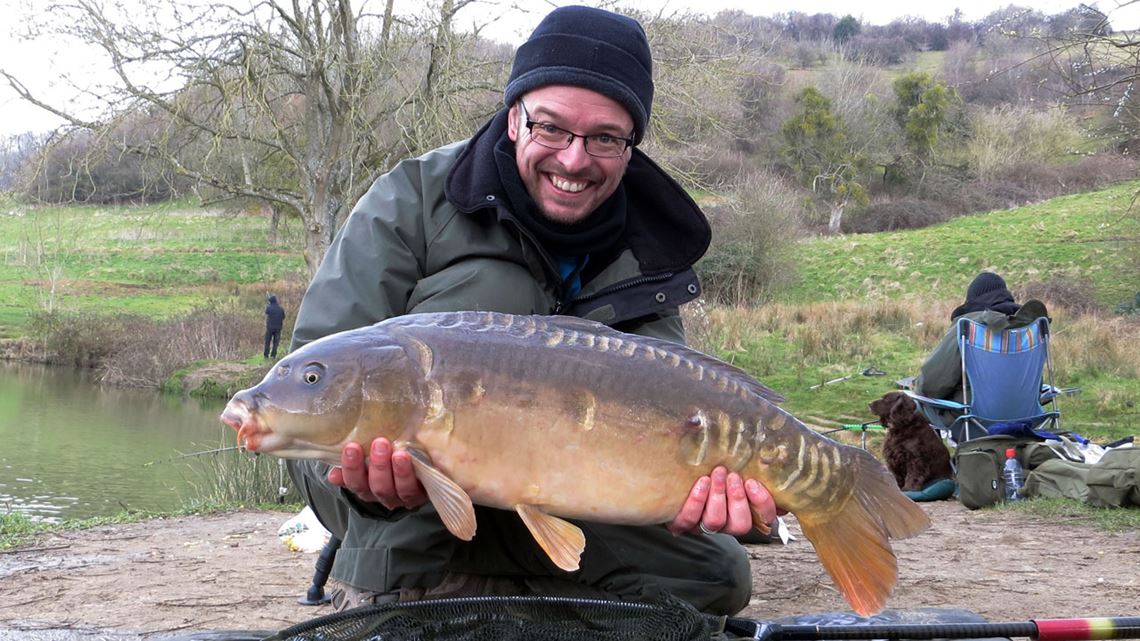 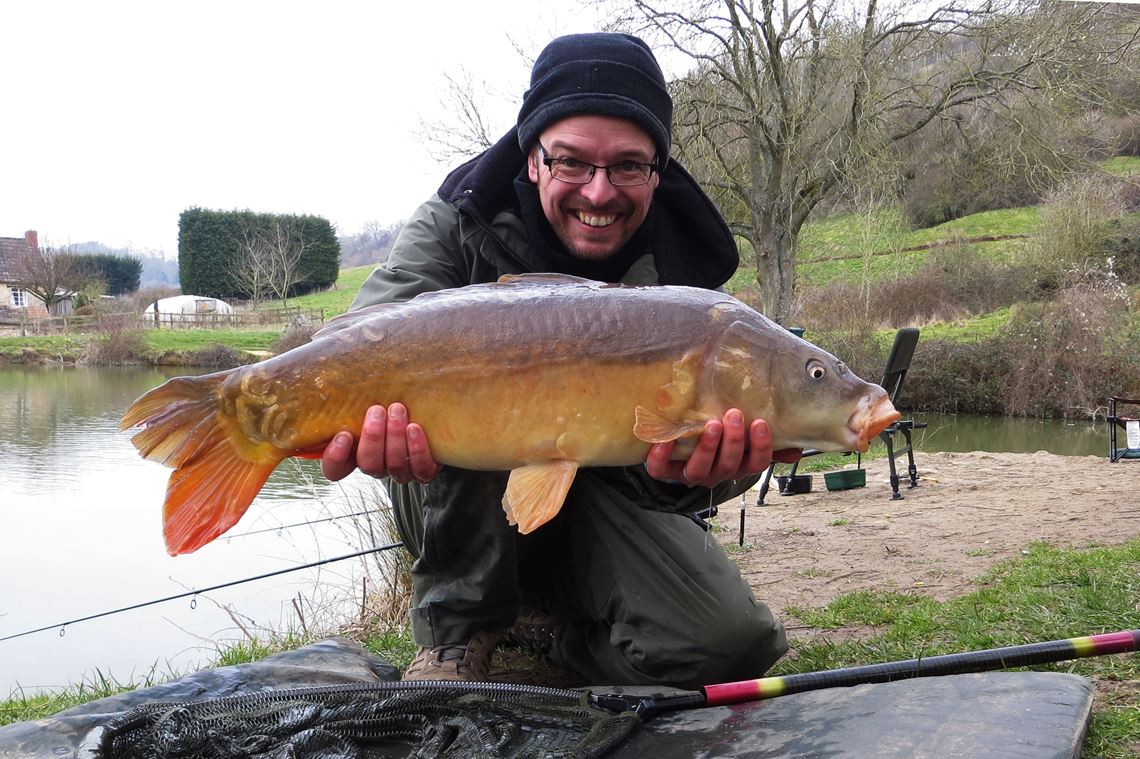 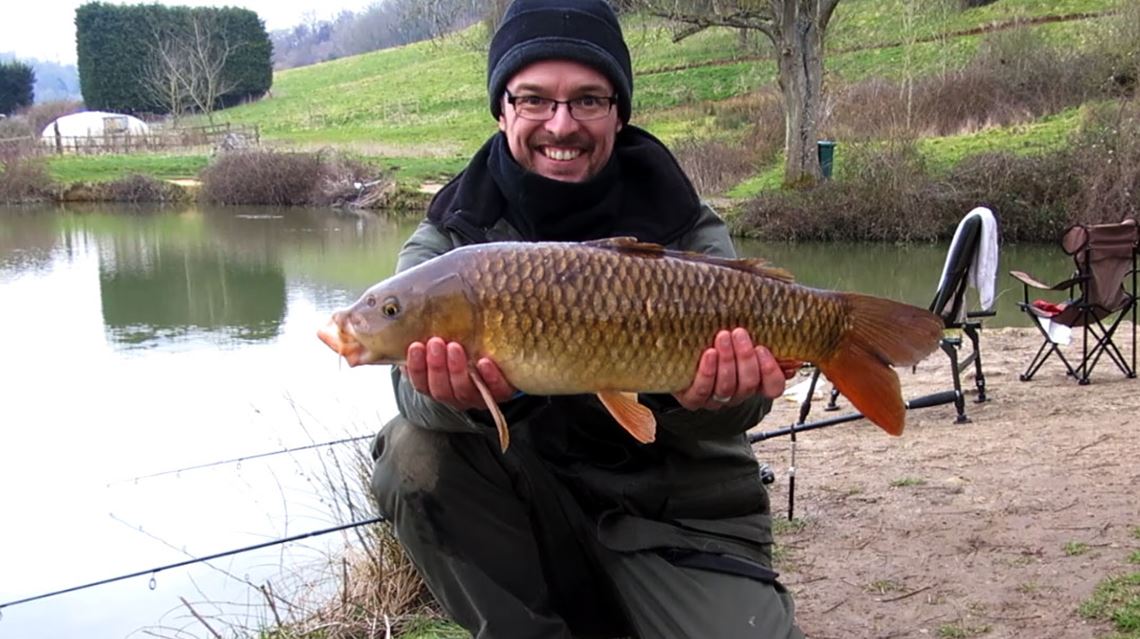 Over the next couple of hours I had another 15lb mirror and smaller darker common of around 8lb all on the Celtic Baits nut mix boilies. An amazing result on an great bait.

The last hours were spent with Lilly-Grace and I trying a bit of surface fishing, more practice with the float and just whiling the hours away on the bank. We packed down around 4ish having had a great day. Kilcott never fails to deliver!

The only downer to the day was a couple of fellers on the far bank who had no landing net or unhooking net. They were surface fishing and hauling carp out in the edge using their hands which is just not on. There's no excuse, if you don't have these basic items you shouldn't be allowed to fish, it's that simple. A majority of the fish we caught today were in pretty good condition but that won't last if people don't look after the stop. Shame on them!