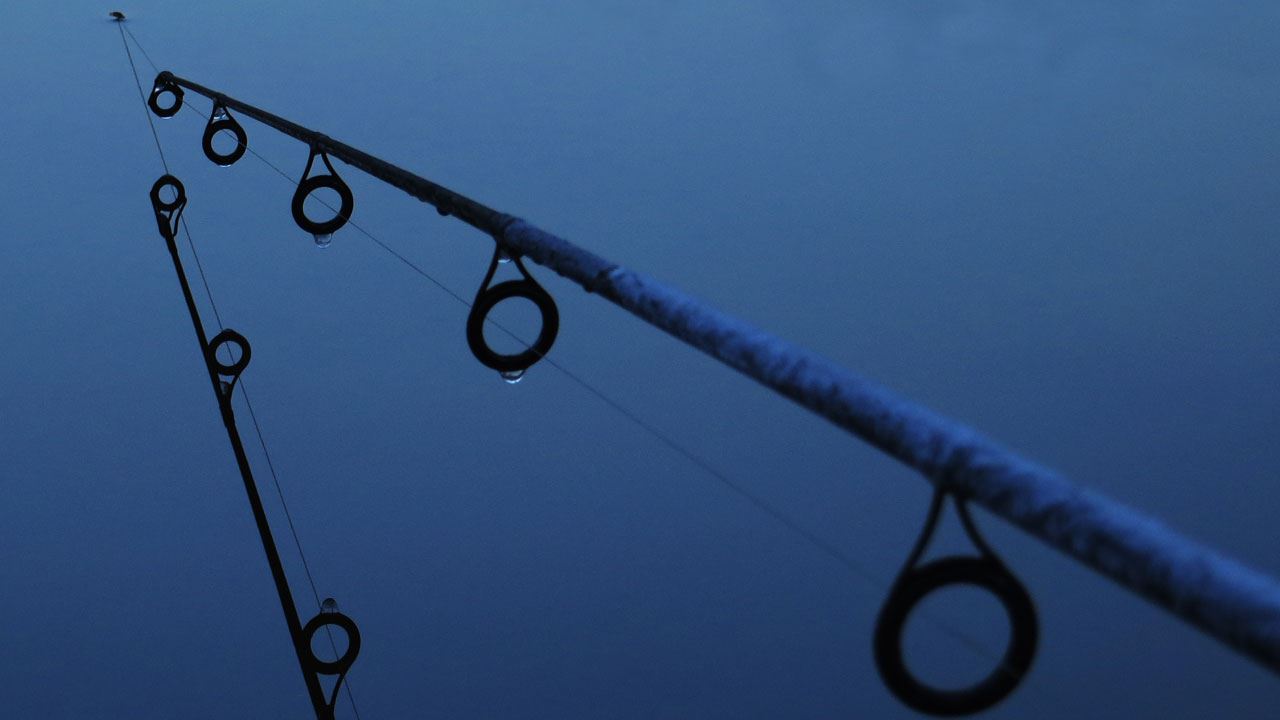 I was lucky enough on Friday to get a chance to fish a private water on an overnight session. You may question my 'luck' as we're in the last half of December and the weather is pretty shocking but at the moment, any opportunity to get out on the bank has to jumped at!

As you can imagine, I'd been watching the weather all week. We've had some frosts recently but the major feature over the next 5 days was a warning of gale force winds and torrential rain forecast to hit on Friday... Not ideal?! However, as the week went on the wind and rain moved to Thursday night and Friday was now looking... cold...

I managed to get out of work on time, rushed home, did bedtime with the kids, got all the gear in the car and was at the lake around 7.30pm. It was flat calm and very, very still but surprisingly warm. Or maybe that was the thermals, 2 t-shirts, trousers and ProLogic thermal bib 'n braces and jacket and woolly hat I was wearing?!

Turning up at a lake when it's dark is a bit of a challenge but I'd already done a recky to scope out swims and got the marker float out to find some spots a week or so previous. It's not a massive lake, around 2 acres in size with a maximum depth of around 8ft. My plan was to fish to the middle of the lake in the deepest water and cast regularly till I either found some fish or found a bait that'd prompt a bite.

Bait wise I'm currently testing out the new boilies from Innate Baits. I've never really used popups in my fishing and with it being winter I was really keen to give them a try. For this session, I had 3 different popups to try:

As it wasn't raining I decided to establish base camp in my selected swim (which only took two trips to the car and back - I really need to get a barrow...) and get a couple of rods out before setting up the bivy. Both rods were already clipped up: 9 rod lengths for the left hand rod and 10.5 for the right. To hedge my bets, the left hand rod went out with a Mainline Cell boilie topped with corn on a simple blow back rig. It's a combo I've had success with pretty much anywhere I fish: the rig is nice and simple using a size 8 Korda Kurv Shank hook, a bit of silicone on the hair to keep it in place and 15lb coated braid with around 2cm of the coating stripped back from the hook to form a hinge. The only change I'd made to the set up was to go slightly longer with the hooklink - I usually go around 5 inches for my summer fishing but I'd read a lot about how longer hook links are better in winter so I gave it a go for this session with the rig being around 8 inches long.

The other rod went out with a chod rig and a Pineapple+ boilie. Based on what I found with the marker float, the lake bed was actually very clean for the time of year but my main reasons for using the rig was that it's perfect for presenting popup baits. This is really new one for me as I've never used a 'choddy' and having invested in one of the Korda Chod Kits I was keen to give it a go.

So both rods went out, the left rod with a small dynamite stick of ground up Cell boilie and Sensas black ground bait and 6 boilies catapulted over the top and the choddy as a single hook bait. I had the opportunity of fishing three rods for this session but as it was rapidly getting colder, I decided to get the bivvy up and sort out the camping gear. I had a feeling that it was going to be a long cold night so it made sense to get everything prepared before my hands got too cold and I lost feeling in my fingers! But setting up kept me really warm and by 9pm everything was done and dusted.

Which seemed to trigger my 1st run of the night! It's amazing how the fish seem to 'know' when to bite ;)

Baring in mind it's winter, this fish was really going for it - it put a decent bend in a the rod and was a real a real head banger (always a good sign). But unfortunately for me, it wasn't to be... after 5 minutes the line went twang... There was still weight there so the line hadn't snapped but on reeling in it became apparent a snapped hook link was to blame.

To be honest, it was my bad: I need to get into the habit of tying new rigs for each session, even if the hooks get reused. In this instance, it was a braided hook length that had been in the water

before and it must've weakened it as the snap was in the middle, not near the hook or at the knot end (where I'd expect it to go).

So lesson learnt! As I'm sure you can imagine, I spent the next hour tying new hook lengths and then all three rods went out again to their marks. This time, the right hand rod got a fresh Tangerine Dream boile, the middle rod a new Cell and the new left hand rod a Washed Out Strawberry Pink to a random cast into the lake (I figured with three rods, one could be a 'rover' that could be cast every 20 minutes to pick off a random fish).

By this point the temperature had really dropped and the grass was getting crispy under my boots. But it didn't see to bother the fish as the next run came at around 9.30am! It was the same rod with the cell and this time got it in: a really nice mirror carp of around 14lb, cracking way to kick start the session ;)

The middle rod went out again and after a bit of warming soup, I decided to climb into the sleeping bag and hit the hay. It must've been about an hour later and the right hand alarm sounded which had me hopping out of the bivy. It was really, really cold by now and through my misted up glasses I could see all three rods were now covered in a thin layer of frost. Picking up the rod was like holding a piece of iron, it pretty much stuck to my hand!

The fish put up a really good fight and eventually it slipped into the net. Another mirror, around the same size at 14lb ish.

The rest of the night was a blur... The alarms sounded every hour with all 3 rods producing fish. The cell rod had gone silent so I'd switch everything over to Innate Popups. It was a close run thing between the baits, but the in the end most fish fell to the Pineapple+

All in all, I had another 4 fish before everything went silent at around 4am. Nothing as big the 1st two fish but getting bites in this weather was amazing, a real testament to the quality of the bait I was using. I was incredibly cold by now, jumping in and out of the sleeping bag and blundering around in the dark. The landing net had become stuck to the boards, the unhooking mat had a thick layer of ice on it and the line had begun freezing to the rings... Pretty hardcore!

I manage to get head down for the next 3 hours. The alarms bleeped a couple of times, but I put it down to liners. However, when I eventually surfaced at 7ish I found the left hand rods line had swung right round to the right... interesting?! On picking up the rod, there appeared to be a fish on the end! It was only a small common of around 5lb, I wonder if it'd picked up the bait, kited to the right and then fallen asleep?!

Believe it or not, as I slipped the carp into the net the right hand rod bleeped and line started to spool from the line - a double hook up? In winter?! Again, this was another smallish fish of around 6lb.

As I was slipping the 2nd fish back I noticed the bobbin on the middle rod was up near the blank rather than near the grass where it'd been when I finally crashed out. Another sleeper fish?! I picked up the rod, struk and connected with the fish but within seconds it became apparent it had somehow managed to get me wrapped around a snag and the line locked up solid...

But who's complaining? A winter overnighter in zub zero conditions that resulted in 8 fish and 2 lost is a pretty darn good result in any ones book ;)