It's half term, the kids are away so it's a double hit of fishing this weekend! The weather has been miserable... record levels of rain, high winds, frost, sleet, hail... all the rivers are in flood... the forecast for the weekend was predicting armageddon for Saturday but sunny on Sunday... So we thought we'd hedge our bets: Lower Kilcott Farm on Saturday and a new water, Harescombe Fisheries on Sunday.

But we arrived around 9.30ish just as the weather turned for the worse: I'd managed to get my gear round to the swim just as a big rain cloud dumped it's contents on the valley! I'm not the biggest fan of umbrellas, but getting them set up when it's chucking it down with rain and blowing a gail is a real challenge.

Anyway, I got set up, got the rods out and settled in under the umbrella. After the last session, we had a feeling that the action would be fast so I opted for a cage feeder with the faithful liquidized bread with mixed in maggots, sweetcorn, a handful of groundbait and a couple of handfuls of hemp with a maggot ball on the hair. The other rod went out on a lead clip ledger with popped up plastic sweetcorn on the hair and a PVA mesh bag filled with the bread mix. I got this into a little corner, the idea being to hopefully pull in any bigger fish with the small hookbait.

One small mishap: 1/2 my bank disappeared into the lake!

The water has a lot of very hungry fish between the 1lb to 6lb mark so once you get them feeding, they can actually be picked up on the drop. Many of the bites came as the rod was placed in the rest after the cast, especially on the feeder. Even the ledger rod went off a couple of times as I was placing the bobbin on the line!

The weather really picked up in the afternoon: the rain stopped, the wind died down and the sun came out. I've been desperately trying to persevere with my float fishing so out came the light tackle with an aim to pick out some of the great roach the lake has to offer. After an hour or so of picking off smaller fish, the sun had warmed things up and the fish were starting to take the small bits of bread I'd been throwing in at the edge... and then a goldfish popped up. And another. It was too much to resist, so I stripped the shot off the line leaving a couple round the float, got some bread on the hook and started surface fishing (had great fun doing this on our last trip).

I had several small carp and as more bread went in, the surface really started to boil. There were a group of around 10 or so fish that seemed to be rolling over each other in an effort to get at the bait! The interesting thing was that as the group bashed the bread, it became smaller and less buoyant meaning it sunk... and got picked off by the roach! I had 3 fish, all of a decent size that took the bait as it drifted down through the water after the carp had bashed it to bits. Great fun.

But the real prize was the goldfish: 2 kept on appearing at the edge of the 'carp boil' so it was a case of being patient, waiting till then appeared and then gently lowering the hook bait near them (I was only fishing a rod length from the bank!). After a few frustrating misses, I finally hooked one: 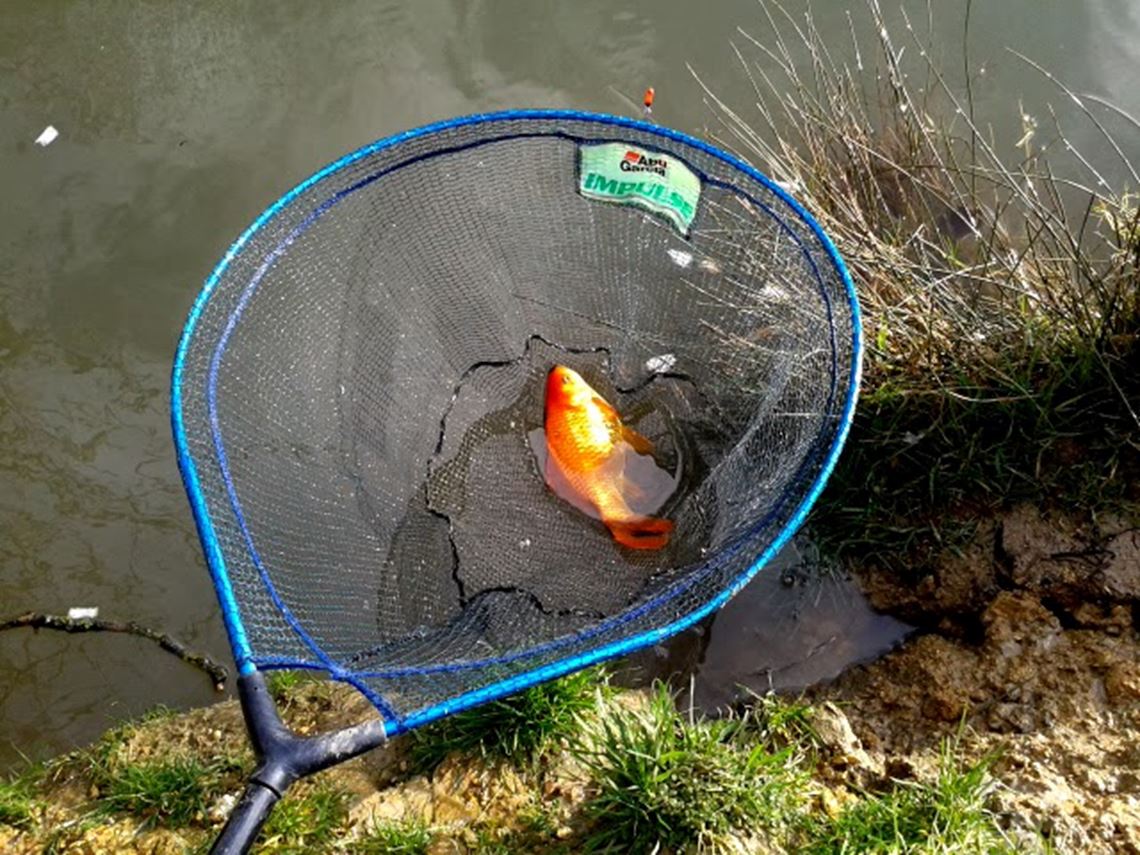 A plump goldfish - not bad!

The fishing kept it's pace till last nockings around 5ish. It's a really pretty spot, packed full of fish and a definate 'guarentee-a-bite' venue even in the worst weather conditions.

I even managed to get my surface controller that I'd lost in a tree on the last visit back - a result all round!