The year is nearly up, the weather is bloody cold - must be time to get a last gasp fishing session in before we say goodbye to 2014!

We've had some really, really hard frosts of late and it's been incredibly cold but what the hell, gotta get on the bank. As I had a total freedom pass (the grandparents are in the house) I decided to go further afield and picked two venues that are chocked full of fish. Number one choice was Lower Kilcott Farm. It's a small farm pond that's filled with 100's of hungry carp and you'd be guaranteed a bite. If conditions where really bad, the plan B was Harescombe Fisheries, mainly due to it's choice of 4 lakes and the fact Dad and I have caught there in the winter before.

The day started with me scraping ice off the car at 6.30am! The roads where white and the car was screaming at me that it was zero degrees outside... But the drive out to Lower Kilcott Farm was surprising easy. I'd opted to take the 2nd of the two turnings down to the water as the 1st road is incredibly steep. We'd had a hairy time getting down the lane last year with rain, high winds and fallen trees being the danger but this time round it was ice...

So after a gentle descent with only one slip on the ice, I arrived to find the lake completely frozen over! Bugger. I guess with the water being at the bottom of a sheltered valley, the frost had really set in... So, no fishing at Kilcott Farm today, time to jump back in the car and head 20 minutes further up the road to Harescombe Fisheries. 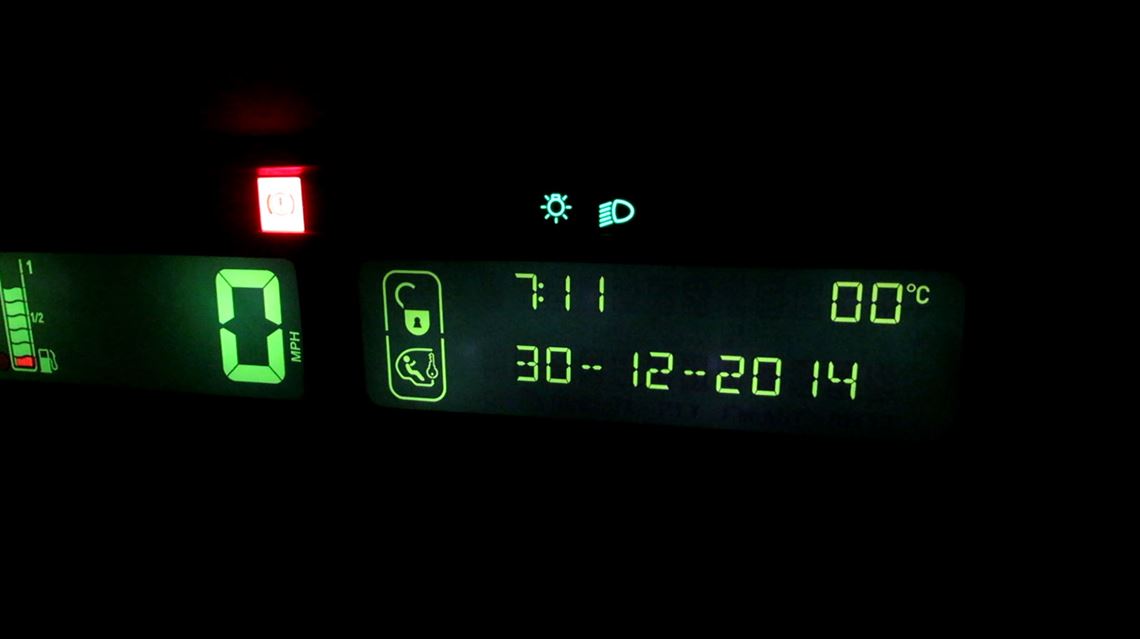 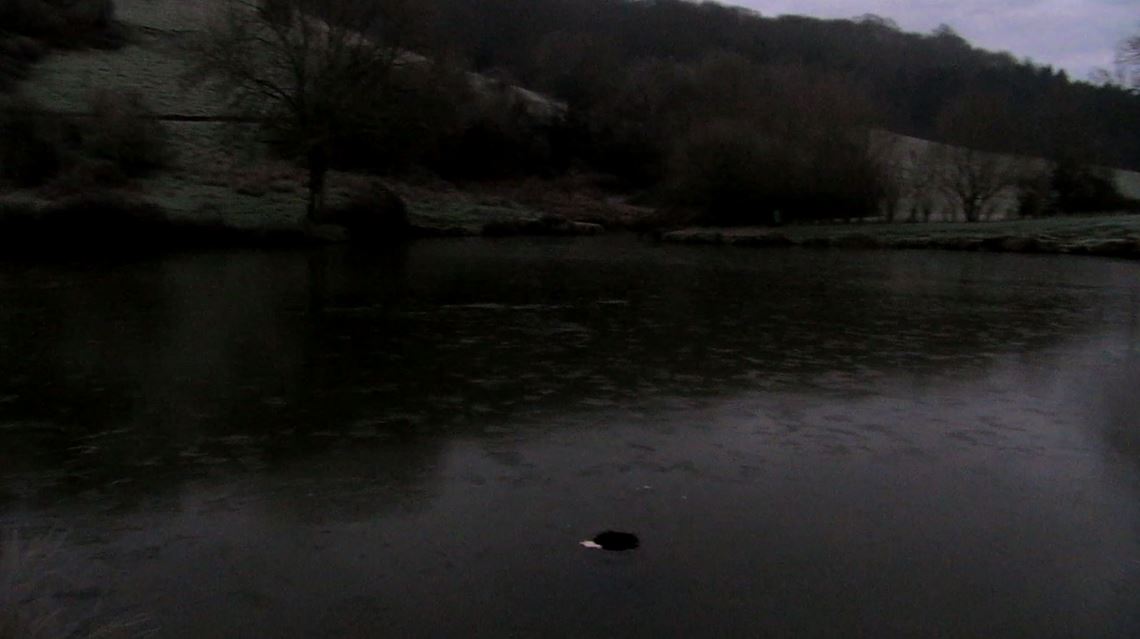 The drive out through Stroud was beautiful, the sun was just clipping the horizon and the fields and villages looked very Christmassy. There was another steep descent down to Harescombe but I finally made it to the fishery around 9ish to find it quiet and still but most importantly not frozen over!

Dad and I have fished Harescombe a couple of times in the past and we've always ended up fishing the top lake Meadow due the the other lakes being incredibly busy (there are 3 lakes and one pond at the complex). But with it being post Christmas and bloody cold, Field lake was deserted so I decided to give it a go with the plan to move up to Meadow if the action was non existent.

I opted for a swim slap bang in the middle of the far road bank as this gave me access to the most water and cast a feeder rod out to the right of the swim to where a fish had just shown itself... The rod was loaded with a couple of grains of real corn mounted on Guru Feeder rig with a size 12 hook. The feeder itself was a small cage so I could keep the feed down to a minimum and it was loaded with my favourite winter groundbait mix: liquidized stale bread mixed with Swim Stim Amino Black and ground down Cell boilie. It smells great, leaves a great cloud in the water column and won't fill the fish up - perfect.

And within minutes, I had my 1st run!

Amazing to get action so quickly, a really good sign. It's actually a bit of a running theme with Harescombe as on the two previous trips I've managed to get a run within minutes of the 1st cast!

The next 20 minutes were crazy - I just couldn't keep the feeder rod in the water for long enough to sort out the 2nd rod! 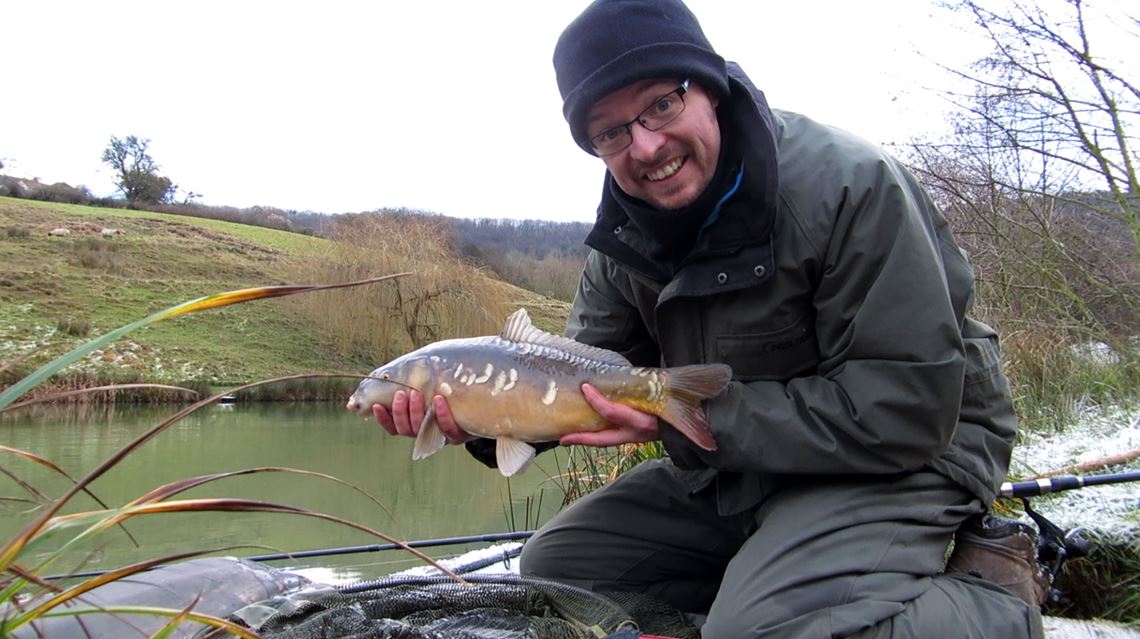 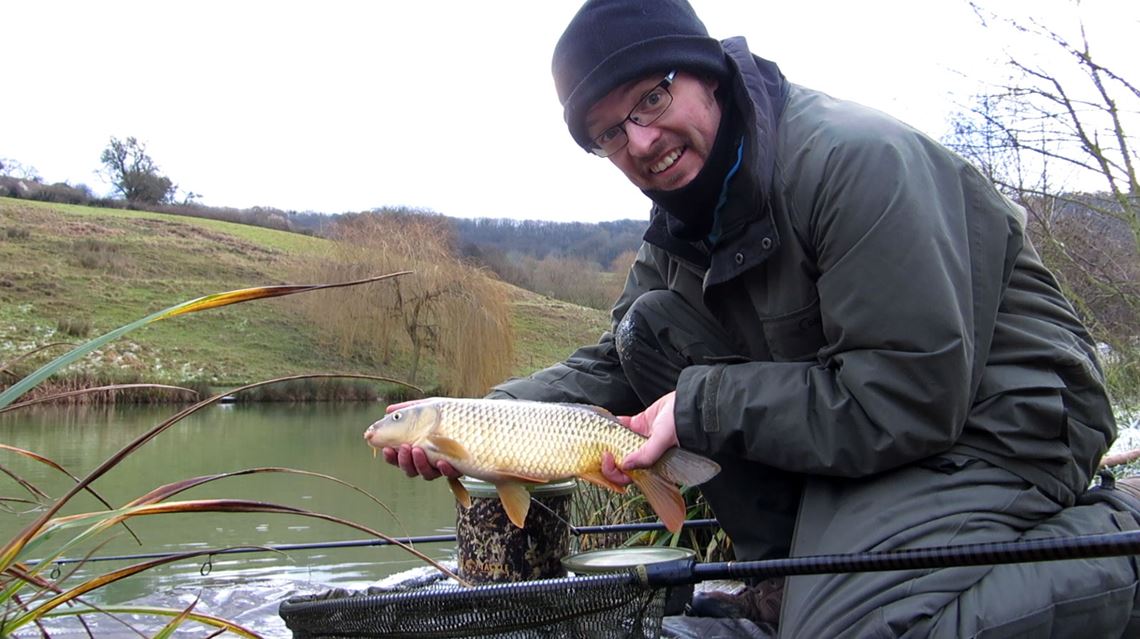 By the time the bailiff came round at 10ish, I'd managed to get the 2nd rod out with a bottom bait and 6 or so carp had slipped into the net. Whatta session, the lake was fishing like it was summer not winter?! And I'd only been fishing for around an hour...

The lake had slowly started to fill up with 5 other anglers setting up in swims nearest the entrance with the exception of one fella who'd headed down to the far end of the lake. Unfortunately for me, getting so much action had stirred the interest of 2 fellas who were not catching and they decided to move swims, annoyingly picking a spot virtually opposite me and casting exactly where I'd been catching from. So much for etiquette between fishermen?! (As it turned out, it did them no good: they blanked!) 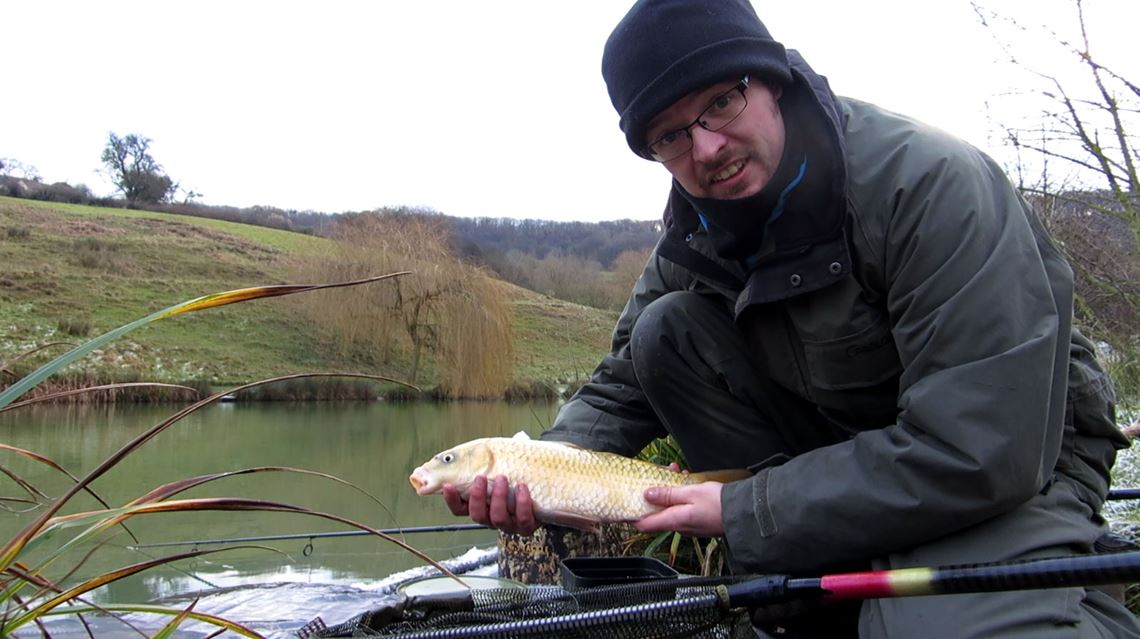 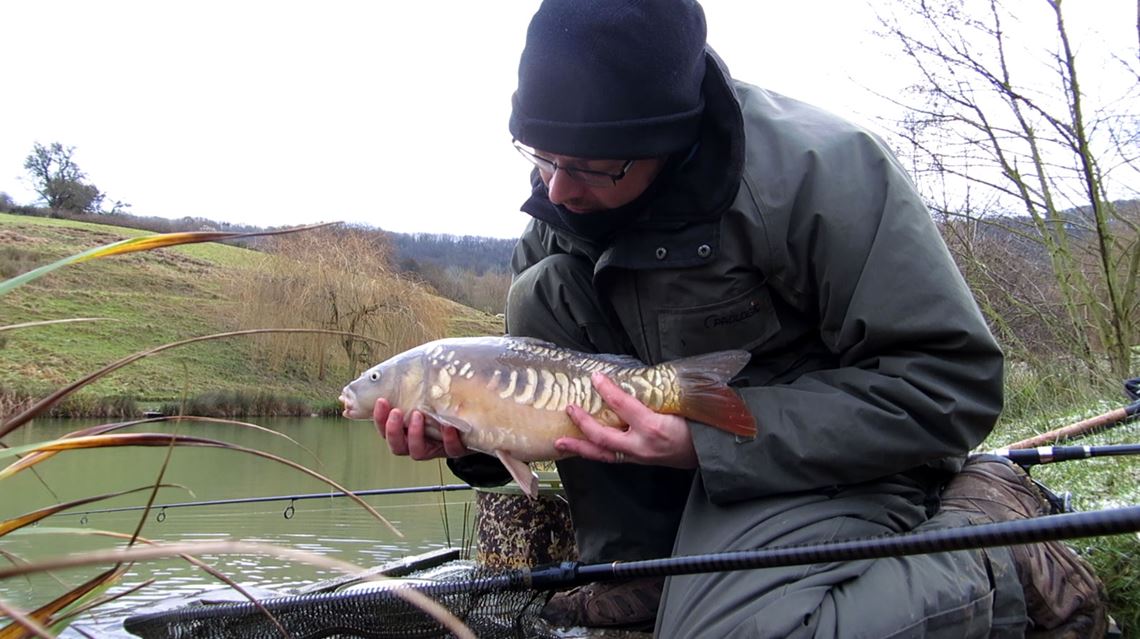 Whether it was my new neighbors constant chatting, the fact we'd past the winter feeding spell, or that the shoal had moved on the action dried up slightly at around 11ish. One thing we'd noticed on previous trips was that once the action slowed, it was time to ring the changes bait wise. So far, most of the fish had fallen to just plain old sweetcorn but I decided to try Celtic Baits popups, Mainline Cell boilies and pellets. Each producded bites but amazingly, after each change I put out some sweetcorn again and away the rod went!

I had one amazing take but unfortunately missed the fish using a Celtic Baits Pineapple+ popup. I'd tied on a small PVA stick of breadcrumbs and cast it to a deep spot I'd found by plumbing up the float rod. No word of a lie, it'd been in the water for around 45 seconds when it ripped off! Felt like a really good fish but after a good fight, the hook pulled... Ah well, if nothing it proves the bait is a winner!

I had several more fish through the arvo with the carp getting bigger with each run. By now the sun had started to clip the back of the hills and as my swim was now in shadow, it started to get very, very cold...

So I started to pack down around 3ish, did my last cast to a new spot to my right near a tree with the feeder rod and within minutes, off it went! 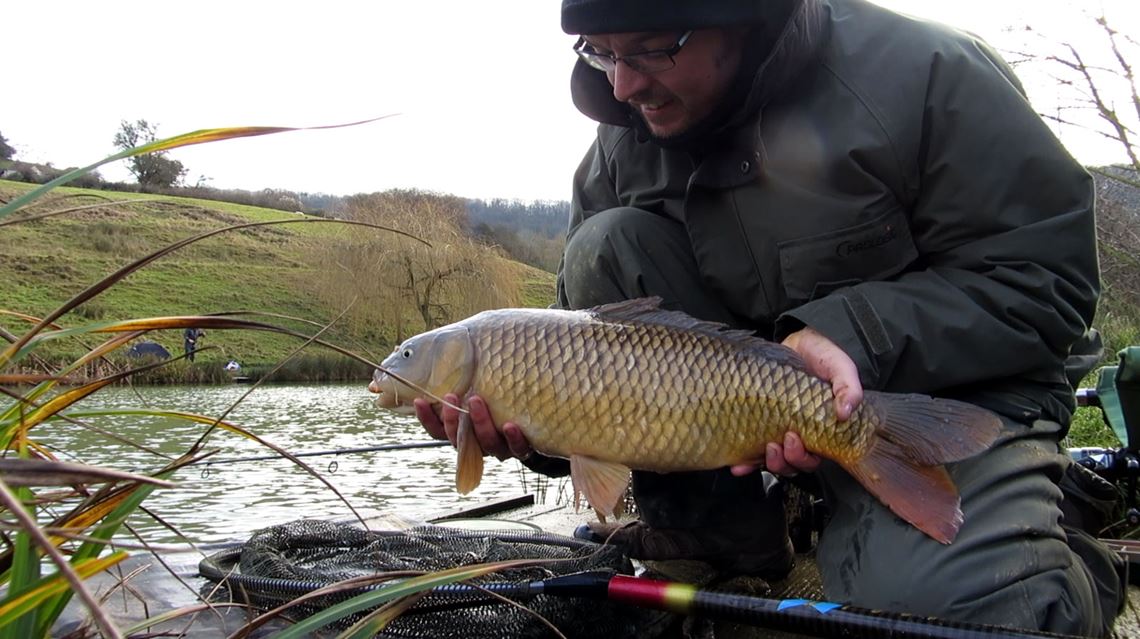 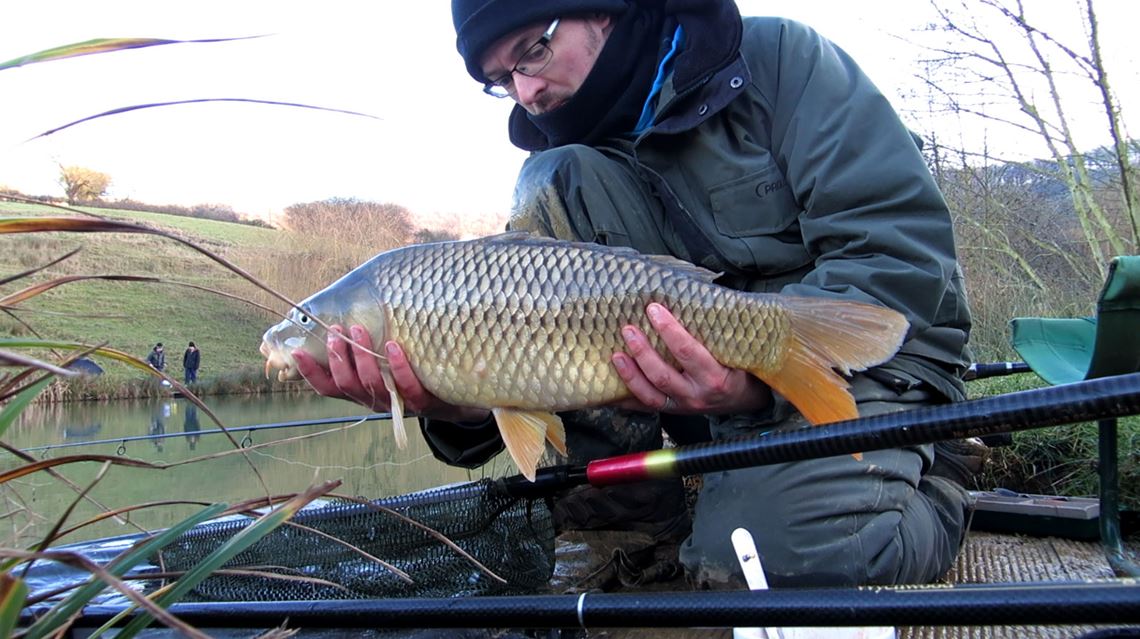 By far the biggest fish of the session and a great way to finish an amazing day's fishing. One of the best winter sessions I've ever had, can't wait to give the lake a go in summer!

Thanks for reading - happy new year!