I was very lucky to get a 2nd fishing trip in during our holiday to Devon (thank you Sarah!). After having a grand day but not many fish (unless you count bream...) at Jennets Reservoir on the Tuesday, I was really keen to head to a runs water and get some fish on the bank!

After much googling, I did find some contenders, not easy as the waters needed to be close by - the Devon roads were stuffed with traffic and the kids wanted (quite rightly!) to head to the beach! In the end though, it was the Anglers Haven tackle shop in Bideford that put me onto the excellent Tarka Swims.

There's mixed info out there re the day tickets: as the lake is run by the 'Bideford & District Angling & Social Club', most websites report that you need to pay a joining fee of £40, then £20 a year to fish! Not so, the chap in the tackle shop sold me a ticket for the grand total of £5! Just goes to show, you can't believe everything you read online...

Another word of warning: the lake is NOT where Google maps says it is! It's quite a bit further along Gammaton Road...

By the time I'd got the permit sorted, picked up some maggots and groundbait and headed out to the water it was around 11am. First impressions were really good! Good car park with toilets and a really well landscaped and maintained looking lake. I took a wander round and settled on a swim near the two islands at the top end which 'bumped' out into the water. It looked perfect for a bite, excellent near and far margins, an expanse of open water and not a lot of angling pressure (love fishing during the week - everybody else is at work!).

There was a very stiff breeze coming across the water and although it was sunny and warm, the fish definitely weren't showing themselves... So I opted for a bottom bait set up, the right hand rod going out to the island margins with a method feeder baited with fake corn and a standard bolt rig set up into open water with double corn on the hair and a PVA bag.

It took around 30 mins and 3 or so casts on the method to get my 1st bite! A nice little common. Then the bolt rig rod went off, a nice little mirror. Good start! After that, I had pretty much constant action for a couple of hours. Interestingly, the bolt rig rod in open water produced more than the feeder (I've a feeling these fish see a lot of method feeders...). I had a handful of small carp to around the 8lb mark and a couple of really good bream. 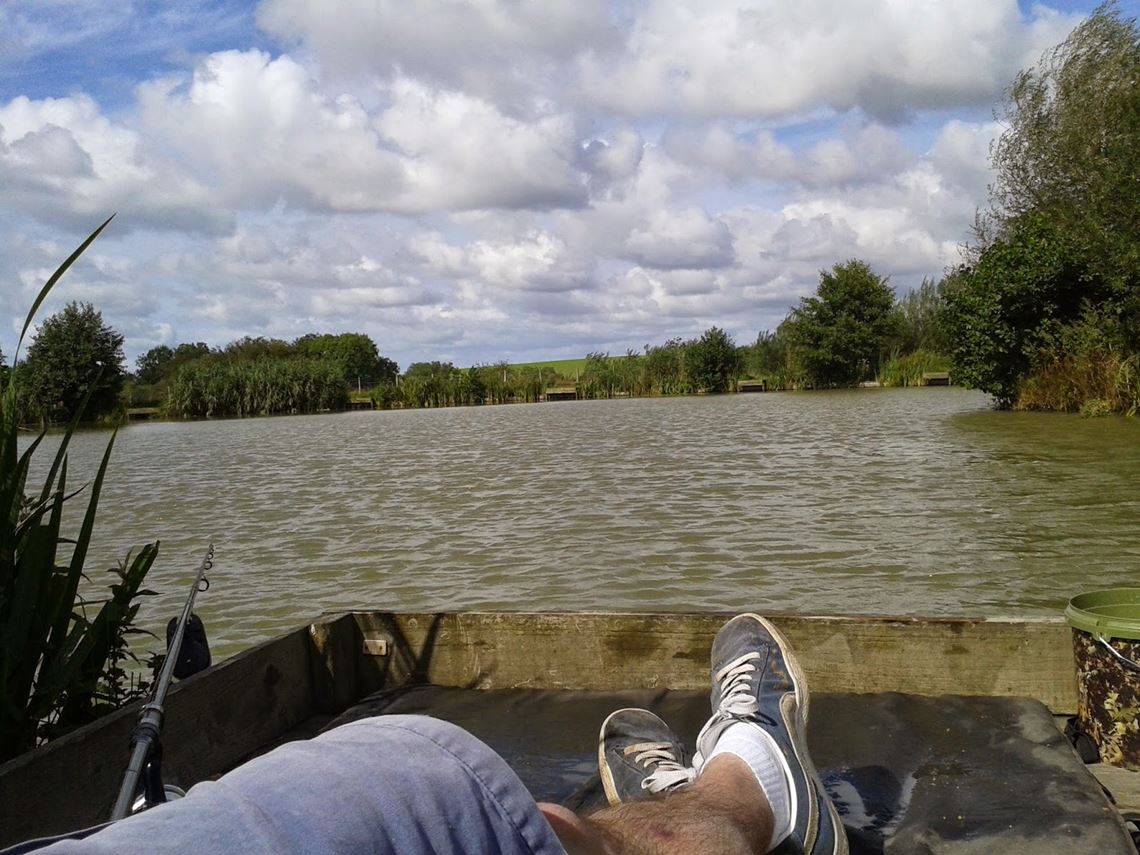 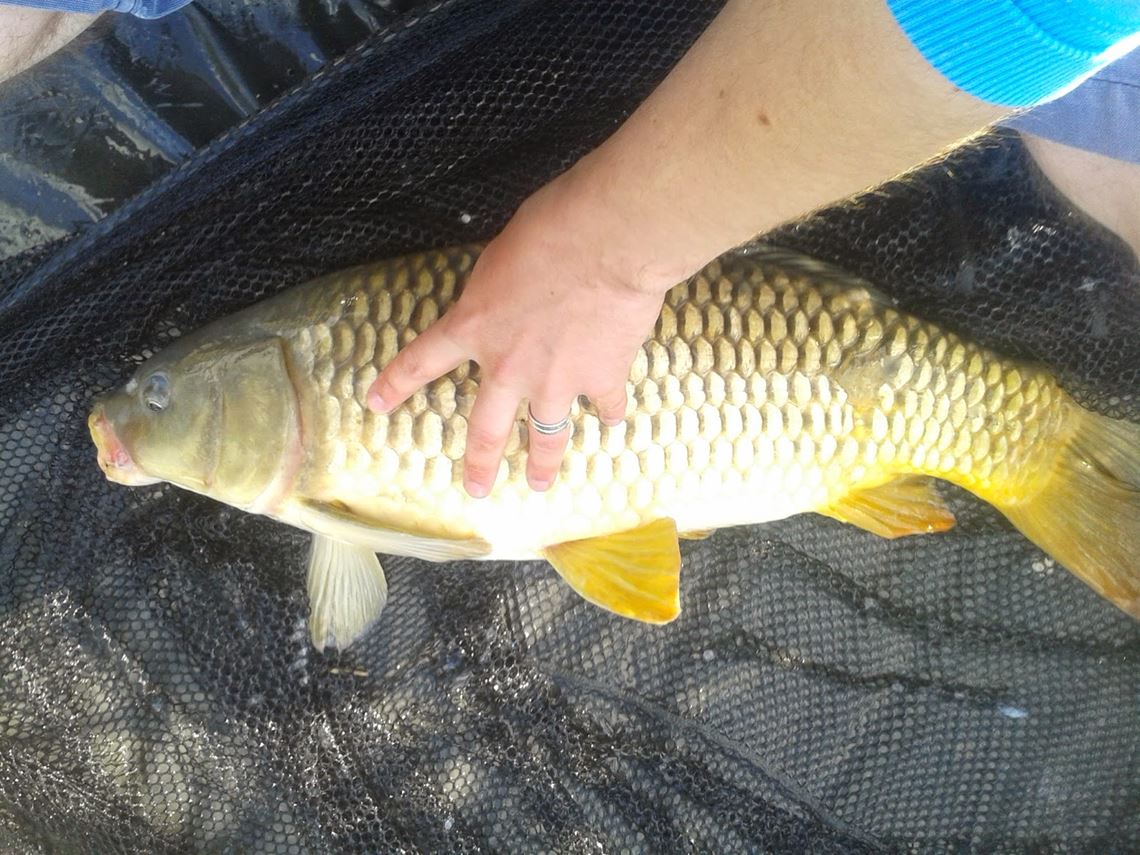 After lunch, a chap appeared in a swim to the left of me further round the lake (maybe there's a 2nd entrance 'cos I didn't see him come in?!) and hooked into what appeared to be a much bigger stamp of fish within minutes off casting out! As my swim had gone a little quiet, I decided to reel in and have a wander round to see what was what.

He'd pulled in good size common of around 16lb. After a bit of a chat, he suggested I switch from corn to big (and he meant big, think fishing for catfish size!) chunks of Spam on the hair and to fish literally just round the corner of my swim in the margins, as close in as I could get. Although this'd mean fishing literally under my feet, he swore blind that that'd be the best place to get the bigger fish!

So I decided to give it a go, the right hand rod dropping in close to the margin (literally inches from my bankside) with a huge cube of luncheon meat...

At 40 mins on the nail, the rod tip whipped round to the left and the bait runner started peeling off line! Annoyingly, the hook length snapped... Really frustrating! I've been using these Guru speed stop hair rigs (size 10 hooks to 8lb mono) and I've had so many give on me, usually just bellow the loop not (the rest have gone in the bin!).

A bit of a swear, a new rig tied (this time a 10 brait hooklink with a Korum bait screw) and another cube of luncheon meat went out. I only had to wait 20 mins for the next bite though... Again, the rod tip went round but I was ready for it this time! I got on the rod and off it went - a good fight later and a decent common of around 15lb came in. 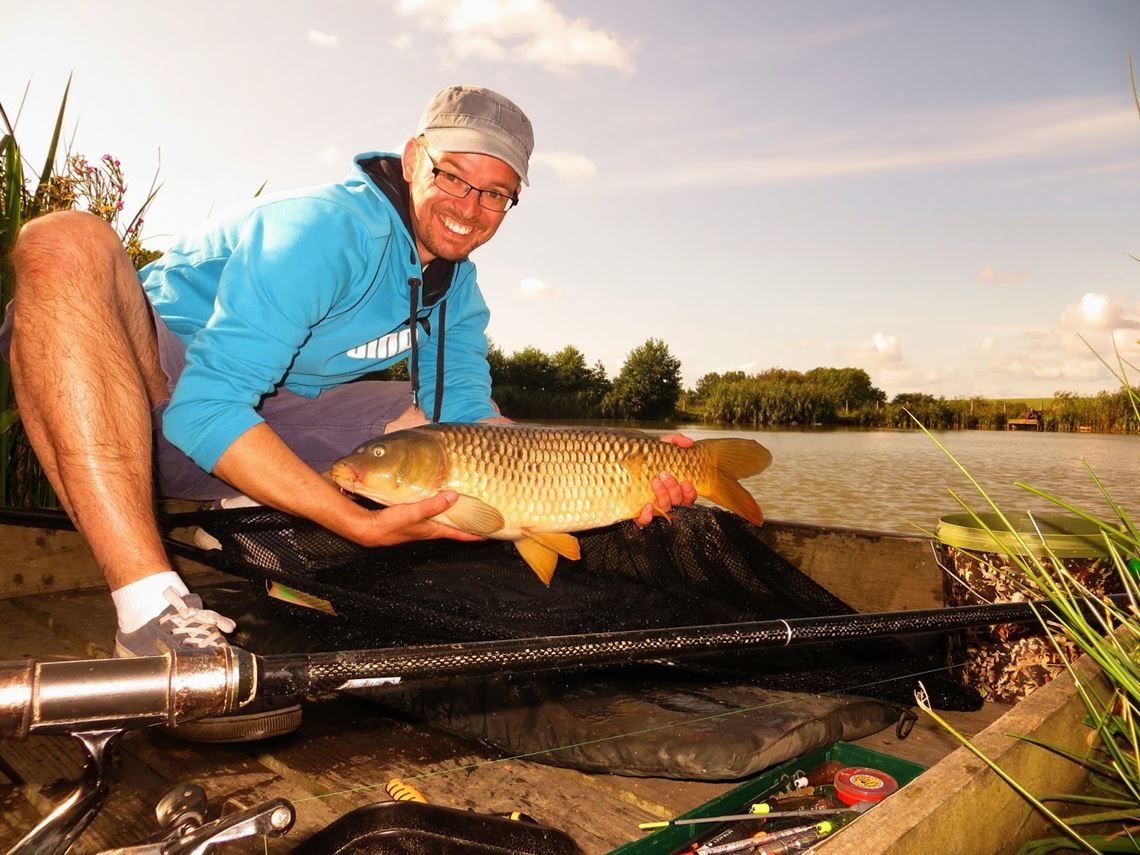 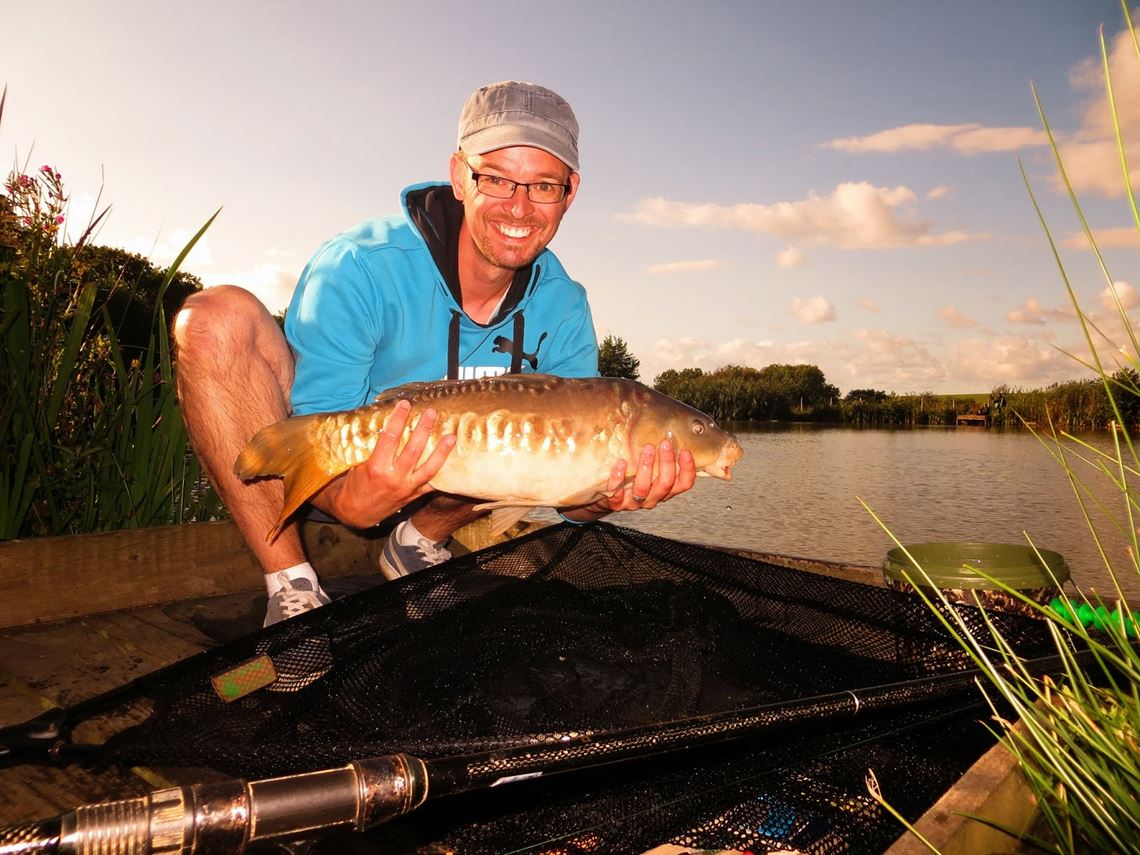 Another 15lb mirror fell to the margin rod with 4 more smaller fish to the method feeder over the next couple of hours. What a brilliant session?! I packed up at 6ish and headed for home.

If you're ever in the Bideford area and looking for somewhere to fish, give Tarka Swims a go - you wont be disappointed!