Scored an unexpected but greatly received freedom pass for a fishing trip this May day bank holiday. Having visited Bitterwell Lake last weekend for a looksee and been impressed with how much it's come on since the last look around over 6 months ago, looked like a great location to wet a line ;)

Love a new venue, always presents a challenge: you have think about how to approach it, find out how it's fishing, ring the changes with baits, read the water... loadsa fun!

For some reason, I woke up at 3am! Not the best start... just couldn't get back to sleep (excited?!) and ended up dozing till around 6ish. Loaded up the car, got on the road and managed to get the fishery at 6.40am - beating the manager by 15 minutes!

The early start really paid off though as I managed to have a good chat with Terry (the manager) about the lake and get a bit of advice on swims. My original plan was to head to a swim near a tree on the far side of the lake as it looked good for a bite: rushes to the right, bit of sun/shade from the tree, good bit of open water but not a overstretch cast for a feeder out to one of the aerators. But the advice was to try one of the double swims near an inflow (very good advice as it turned out...)

I decided to start the day with my fave set up: a sleeper ledger rod with fake corn, pva stick and a light feed of liquidized bread, pellets and corn and a 2nd rod fished with a feeder filled with groundbait and a maggot ball on the hair. The ledger went out into open water, only 6 or so meters from the right margin and the feeder went infront of the inflow.

It soon became apparent I was fishing all wrong!

The 1st run came to the ledger - it screamed off, grabbed the rod and... nothing...

The 2nd run came to the feeder - again, it screamed off, grabbed the rod and... nothing...

This happened a further 5 times! Bloody annoying! I'd been fishing for all of and hour or so and had managed to successfully miss 7 runs - wtf?!

So a bit of a rethink. Got the rods out of the water, got the breakfast porridge on and spent 20 mins or so munching, watching the water and generally calming down a bit. Something was up: the conditions were great, the swim was great, the fish were there, the bait was working... but something was failing. Which left tackle - perhaps I was fishing too heavy? One of the other fishermen (the chap who was actually fishing in my original swim choice) wandered by and mentioned he was using a smaller hook as the fish were pretty shy...

So I spent 10 minutes tying up some new rigs: a hair rigged bait band on a 10cm braided hook length with a size 12 hook, the idea being to mount either pellets, luncheon meat or sweet corn on the band. I also stepped the rod down, switching out the heavy 2-1/2 test curve carp rod for a much lighter 11ft feeder rod and put a korum method feeder on rather than the original cage feeder. The other rod went out with a similar size rig but this time using coated braid and a trimmed down Cell boilie.

The results were instant... and pretty explosive! The feeder rod had been out for around 5 minutes with two bits of real sweetcorn on the band when it literally jumped from the rod rests and proceeded to be dragged down the platform! Even with the clutch slackened off, the take was so violent that the fish attempted to take the rod with it! It took 5 minutes to get a 6lb common in on the light rod, loadsa fun! 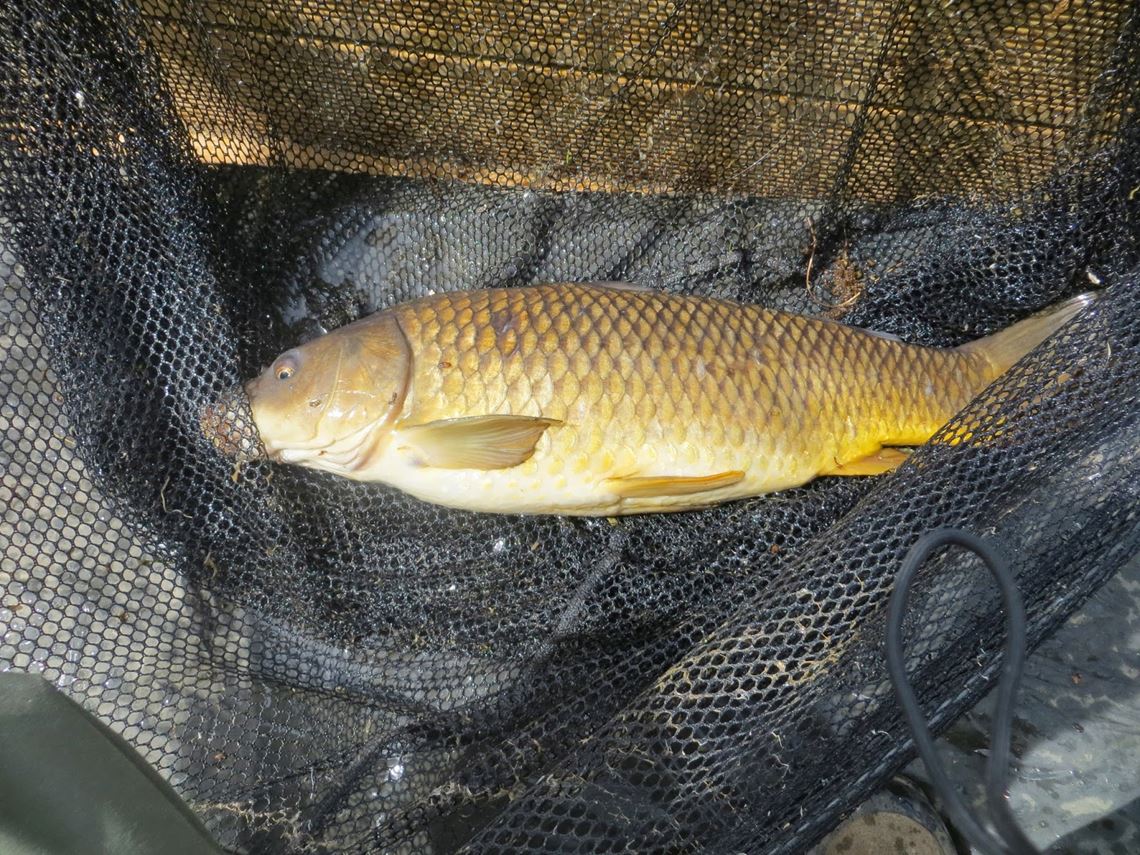 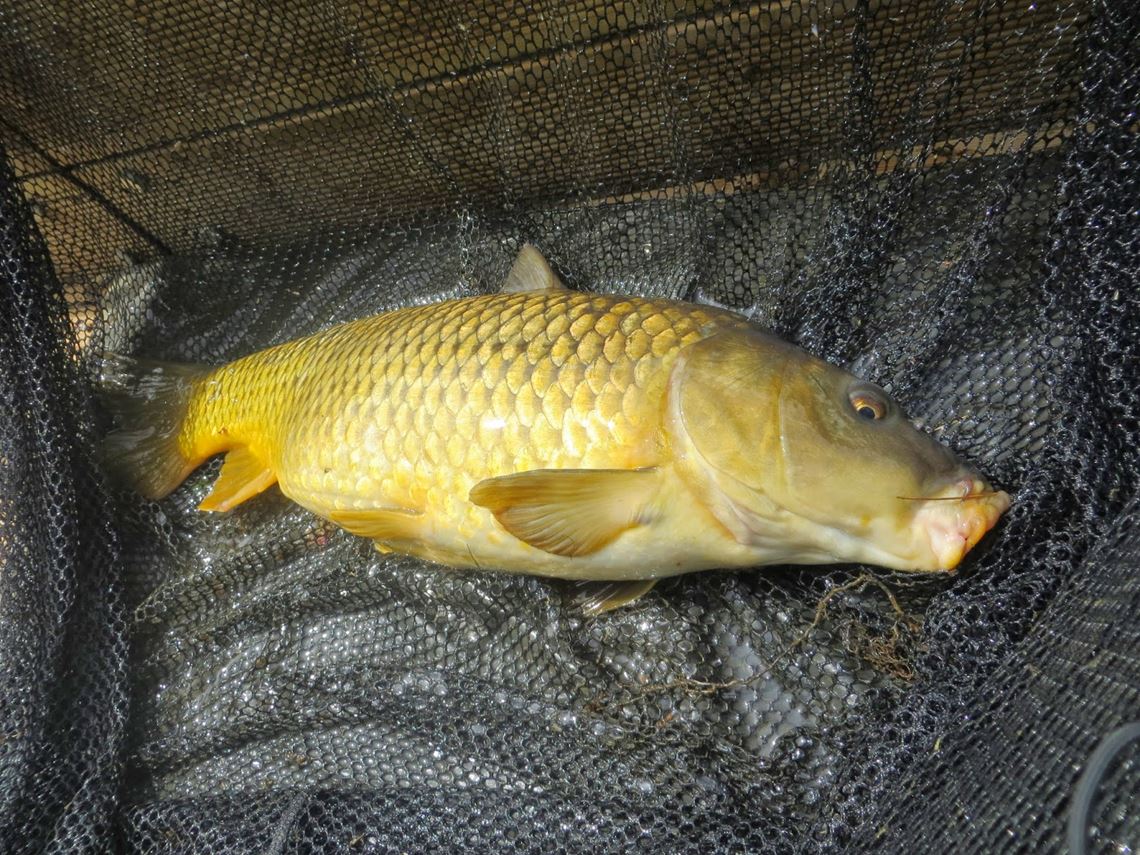 I managed a couple more runs on the feeder (the ledger was silent) when the sun finally poked over the top of the trees behind me and shone on the water just out in front of me. This must've been around 11ish and all of a sudden, the fish started appearing on the surface... Luckily, I'd brought a tub of Pedigree Chum Mixers with me and fired out a couple of pouch fulls to see what would happen. Sure enough, they started to disappear ;)

It got so warm, I was able to shed the bib and braces and expose my lilly white legs to the world...

As the ledger really wasn't producing, I reeled in, got the float rod out and set it up with a really small surface controller running to 6lb mono and a fake chum mixer mounted on the hook. After a few missed takes and a chat to one of the chaps helping out the bailiff on the bank work, I switched to a real chum mixer on a bait banded size 14 hook - a crazy small hook for the fish that were showing, but they kept spitting the bigger ones out!

It took all of about 2 minutes and I was into my 1st fish. And they kept on coming. From 11am through to around 4.30pm it was all I could do NOT to catch fish ;) They we're literally boiling on the surface. I managed to get through nearly a whole bag of mixers, the greedy buggers! The only down point was loosing what I imagine was the biggest fish of the session to a hook pull after a great 10 minute fight... Could've used a bigger hook and a heavier rod for that one...

And after having ignored the feeder rod for a couple of hours (only recasting it every 20 mins or so) it suddenly came to life. I had 3 screaming runs in the last couple of hours of the session that resulted in some really decent fish.

It was difficult to pack up at 5ish, I can only imagine the surface and margin fishing would've really taken off (even more?!) in the early evening but what a brilliant session?! A perfect days weather, a whole loada fish ranging from 3 through to 10lb (there's bigger ones in there, spesh the-one-that-got away!) and I can't wait for a return trip.

If you haven't visited Bitterwell Lake lake yet, it's well worth a visit, you won't be disappointed. It's a really well maintained fishery which has had loads of work done on it recently (with more to come by the looks of it), one of the best in the area I'd say.